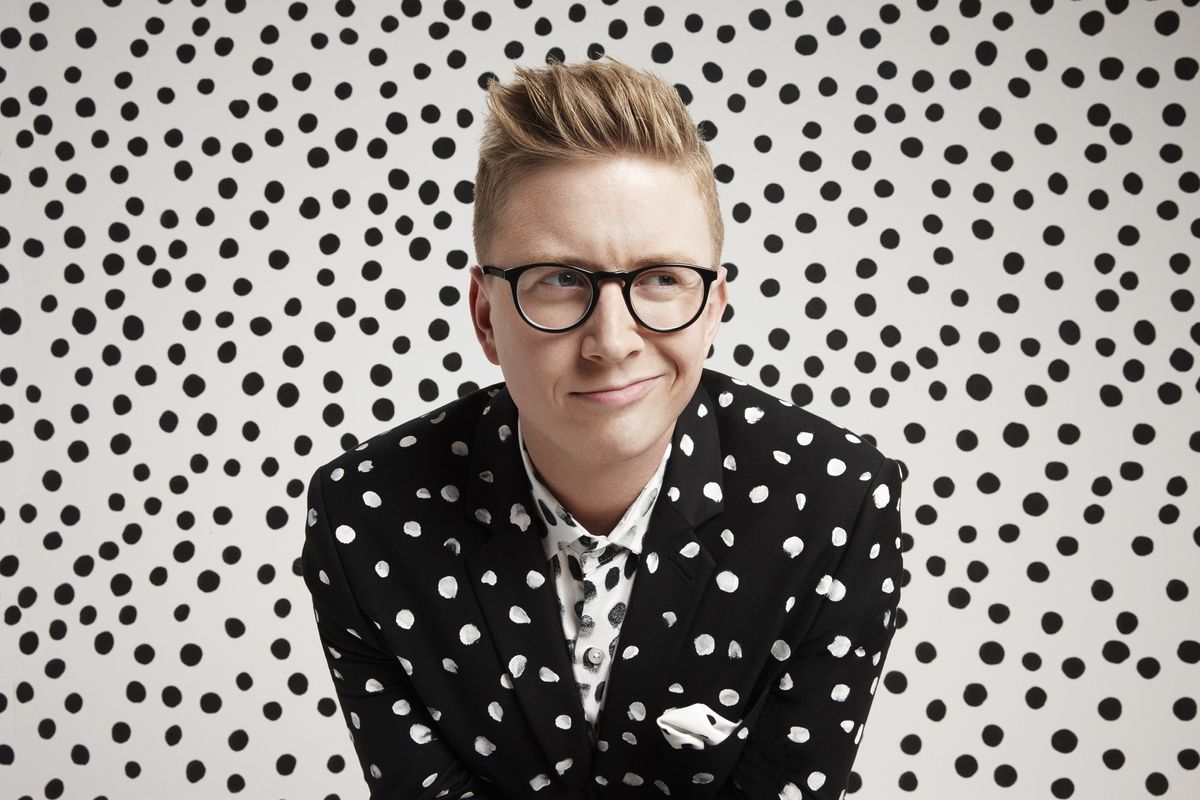 Tyler Oakley on the Social Media Boom, Working with Warby Parker, and the Superiority of Dogs

It's no hyperbole to say that Tyler Oakley is a pillar of the YouTube community. Since he started vlogging on the platform in 2007 he's amassed 8 million followers, written a best-selling book, launched a program on Ellen Degeneres' digital network, been named one of the highest-earning YouTube stars by Forbes, and now collaborated on a line of frames with Warby Parker. Oakley talked to us about the excitement of the social media boom, his collaboration with Warby Parker, and what we should look forward to after a disappointing election season.

Obviously glasses are a distinct part of your look—how did you come to this collaboration with Warby Parker, and what are some of the styles/touches you brought in that you love?

The collaboration started three years ago with me obnoxiously tweeting Warby Parker and saying, "I'm obsessed with you. Can I wear you?" and it's been love ever since. I had this crazy idea that I would be able to design my own collection, and this year it came to fruition. I wanted classic and bold shapes and with pops of jewel-tones, and I'm obsessed with how they turned out.

You've been an active online presence since the early days of YouTube—how do you think the social media boom has been good and/or bad for communication? How do we combat or foster those things? What's the next step in the social media evolution?

The Internet has been the best thing to ever happen to communication. We're able to form relationships & communities with people all over the world, learn new perspectives and feel less alone. There will always be people who take advantage of good things for profit or personal gain, sometimes with malicious intent, but I'd say the good outweighs the bad. I hope the next step in the social media revolution is a collective conscious realization that we have power, and we are able to hold politicians, news organizations, or other influential entities accountable if we do not feel that they are ethical.

What are some of your favorite accounts (on any social media platform) to follow and why—or do you have any weird wikiholes/meme trails you love diving down?

I love @dog_rates on Twitter. They rate dogs, and as someone who prefers all dogs to all humans, it's right up my alley.

You're an outspoken activist for LGBT rights and visibility. What are you worried or concerned about for the next four years from Trump's administration? What bright spots do you see—is there anything that you think we can be hopeful about?

I'm absolutely concerned, and every single person in this country should be. If you know an LGBTQ+ person, if you know a person of color, if you know a woman, if you know anyone who isn't a straight, white, cisgender, Christian male, you should be concerned. Trump's actions speak louder than words, and his appointments send a clear message to minorities: We are not here to protect you. The one bright spot that I see is the maps of voting results in America for the youngest voters --they're our future, and they voted overwhelmingly for inclusion, love, hope, and equality. That's our future.

Finally, it's holiday season (and thus shopping season). What's on your wish list?

I'm not really into gifts. I don't really like new things or gadgets or anything like that, so I'm easy during the holidays. My favorite part is, we each get a stack of scratch-offs and a penny, and my entire family groans as we all only win a buck, if that. It's not about the gifts to me, it's about the moments with family. That, or maybe a cute sweater.