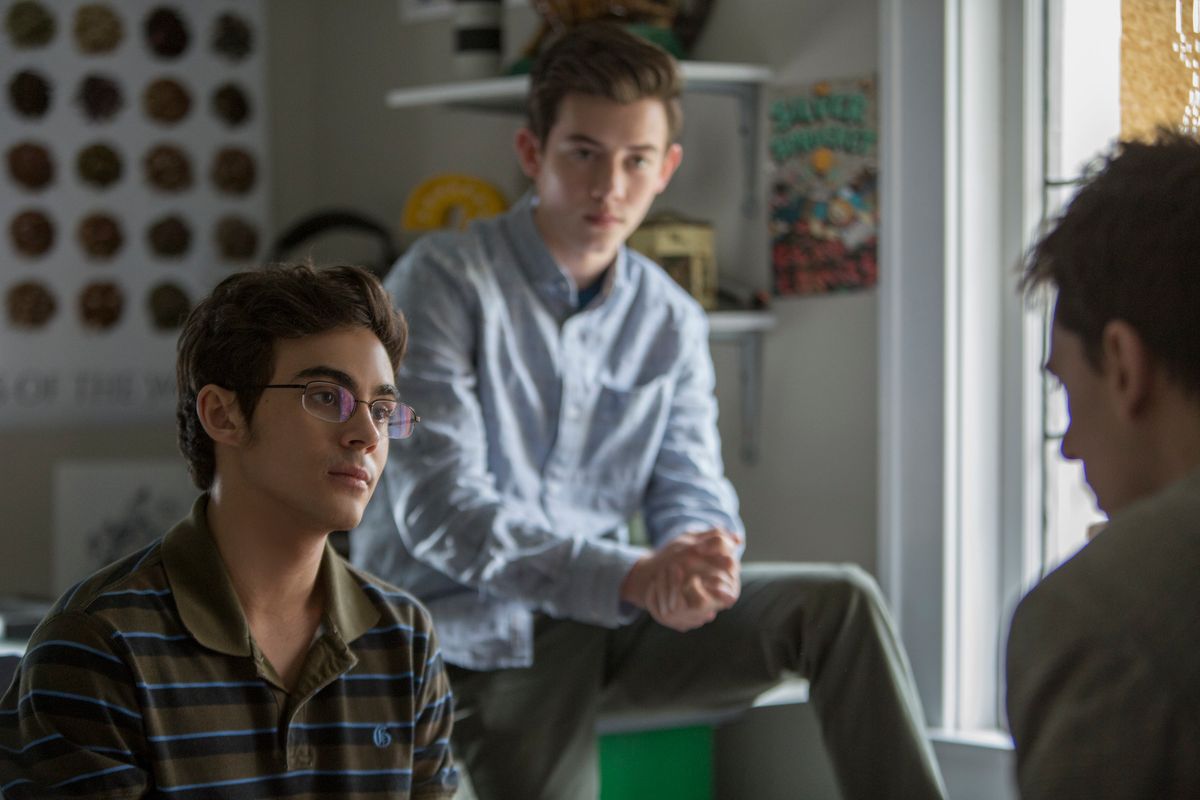 The Star of 'American Vandal' on the Turd Burglar

We, as a nation, are obsessed with true crime. There's always something: Serial (first season only), Making a Murderer, The Jinx, The Staircase. It's a genre rife for spoofing, and no one does it better than the geniuses behind American Vandal. The Netflix series, a mockumentary chronicling absurd crimes committed in American high schools, is one of the streaming service's best — a hilarious, insightful look at teenage life that also manages to nail the cadences of the likes of Sarah Koenig.

Since it's season number two, the action is poop-focused. Peter and Sam travel up north to Washington state to investigate a series of unspeakable excrement-related crimes at a wealthy Catholic school, committed by a vicious troll known as the Turd Burglar. The Turd Burglar's first act of shit terrorism involved poisoning the school's lemonade, causing students to spontaneously crap their pants in a symphony of defecation known as "the brownout."

In a recent interview, Alvarez was careful not to spoil anything ("I will say there are no dicks, but that's it, because I don't want Netflix to cut mine off"), but he did emphasize that the crime this season was "a lot more complex and less linear" than season one. We talked about the Turd Burglar, who did the dicks, and why the trustworthy wear glasses.

The brownout was so gnarly. What was filming like?

My character wasn't present for the actual brownout, but of course I came to see it and it was all very horrifying. I wasn't even working that day, but I stuck around just to see it. I had to witness the explosion. I'm pretty sure I was sick that day and I still came in. It was all very detailed! At the end of the season people were giving out little fake turds as a wrap present.

Do you know what substance they used as poop?

I don't, but I do know that it was hard to get out of clothes. Every single person's poop was different. Oh my god, thinking about it makes me want to throw up. I don't know what was in [the poop] and I'm glad I don't. But I can assure you that even though we are very meta on the show, it was not real poop.

How do you think this crime differs, thematically, from the vandalism in the first season?

This season, they thought about what it would take to push someone over the edge to commit such a heinous crime. And what's the psychology behind someone who created an online profile like the Turd Burglar? To pretty much be waving your hand like, "Hello, here I am, come and find me?" It's just fascinating. As Peter, I had no idea where this would go. Last season I kind of had a feeling, but this season, as a character, I had no idea where anything was going. And this crime is a lot scarier and more intense.

Going back to season one, it's pretty clear who did the dicks. But just in case, who do you think did the dicks?

I mean I know who did the dicks. But I keep that low-key so I don't get fired.

But it's so funny, because I told them I wasn't going to say anything, and then when we get to the Vulture panel and our showrunner was like "Oh, of course it's Christa Carlyle." And I'm like, okay! I guess we're saying it. Because it was always so taboo to be like, "Oh yeah, it's Christa Carlyle." Carlyle did the dicks, that little evil one.

The first season was such a solid spoof of things like Serial and Making a Murderer, and it's safe to say that we're still in the middle of a pop culture true crime boom. What were some of the source materials for season two?

[Israeli tv series] Shadow of Truth was a good one for this season. I love that one. That's a huge point for us this season. And that was kind of the main one we really based this season off of, it was one of the main reference points of the season.

I never watched true crime shows, and then before we did season one they said to watch Making a Murderer. And then I binged watched Making a Murderer and started getting obsessed. And the minute I saw that, I was like, okay, I definitely get the vibe of the show.

I actually didn't listen to Serial until I started doing the voice-overs. I knew what it was, but I had never listened to it. And then I was like, oh my god, this is exactly what the show was. Like with the glasses and everything! I didn't even know about [Sarah Koenig's glasses] and the whole glasses thing was my idea.

Oh really? What made you think about glasses?

I don't know. I trust people with glasses [Laughs]. But no, I just felt it fit the vibe of the character. When I actually saw a picture of Sarah Koenig, I was like, what the fuck.

Alvarez, as Peter Maldonado (with Griffin Gluck as Sam Ecklund), in his glasses.

I grew up in San Diego, so the first season of American Vandal reminded me so much of my high school experience. As someone a bit younger, do you think it's accurate reflection of what it's like to be a teenager?

Oh yes, 100%. That's what I love about the show, how realistic it actually is. When we did season one I had literally just graduated from high school, so it's still so fresh. And that's what I love about it — it's crime and it's funny, but it's stuff that also has a lot of deep meaning behind it. I learn from the show every single time. In this past season, it's crazy how the message keeps reflecting in my personal life. As an artist and as a human being I love that we can have an affect and really say something to the world.

What do you think the show is trying to say?

Season one is definitely about not judging a book by its cover. That's such a cliché and I've heard it a 1,000 times, but once I actually saw it in its physical form it really resonated with me. And I think it's important that Peter was the same at the beginning of the doc then he was at the end. None of the success changed him. That was a lesson for me as well, to keep with me as my career progresses. You can still be the same person you are! I think that's important.

When exactly did you start acting professionally?

I started working professionally when I was 15. I was in high school, I went to LaGuardia [ed note: the Fame school!]. It was interesting. I went there for three months, and then I booked a show [Nickelodeon's Every Witch Way] and I was gone. So I went to high school a lot on set, and basically I was with a bunch of friends. The whole cast was my age, we were all living in a hotel in Miami, I didn't have any parents there. So it was crazy, and it made me mature a lot faster then I would have if I wasn't on my own.

That's pretty wild, and obviously a much different experience than the average American teenager. When you were filming American Vandal, was any of the basic high school stuff new to you?

I base Peter on a very specific side of myself. I love how serious Peter is. It's funny because people always tell me that I take myself too seriously and they tell Peter the same thing, so I can relate to that on so many different levels. It's weird how life prepares you for certain things — a few months before I started American Vandal, I wanted to go to film school. I had been acting for all this time so I felt like it would be a waste to go to acting school, so I wanted to go to film school — you know, if I'm going to spend an arm and a leg, I might as well learn something I didn't know before. I made a documentary as my submission for film school, and it's weird because that really prepared me for Peter.

What was your documentary about?

It was about my aunt's battle with vascular dementia. I documented her and her disease from the beginning of her diagnoses until my last shot, which was me saying goodbye to her for the last time. I've never had a camera in something so personal before so it was weird — it was really weird — but there was a purpose behind it. I ended up playing Peter and understood the stress of making a documentary and wanting to make it good and letting the subject talk and letting my questions just be things that spark conversation. It helped a lot with the filming.

I never ended up releasing it, because it ended up being too personal and too graphic. I didn't think that my aunt would want that, but it was still meant to be because it taught me how to play Peter. It was so by accident, too. It's weird, how life prepares you for certain things.

What did you call it?

I never had a name for it and am still editing and god, it taught me that I never want to be an editor. It's so, so complex. I had seven hours of footage from this documentary. We all called her "Cookie," so I was thinking about calling it Cookie.

I have a few things in the works that might be coming here soon, and I have a film coming out called The Pretenders directed by James Franco. And then of course there's season two. The crime this season tops last season by far. It's so interesting and so complex — prep for twists and turns.