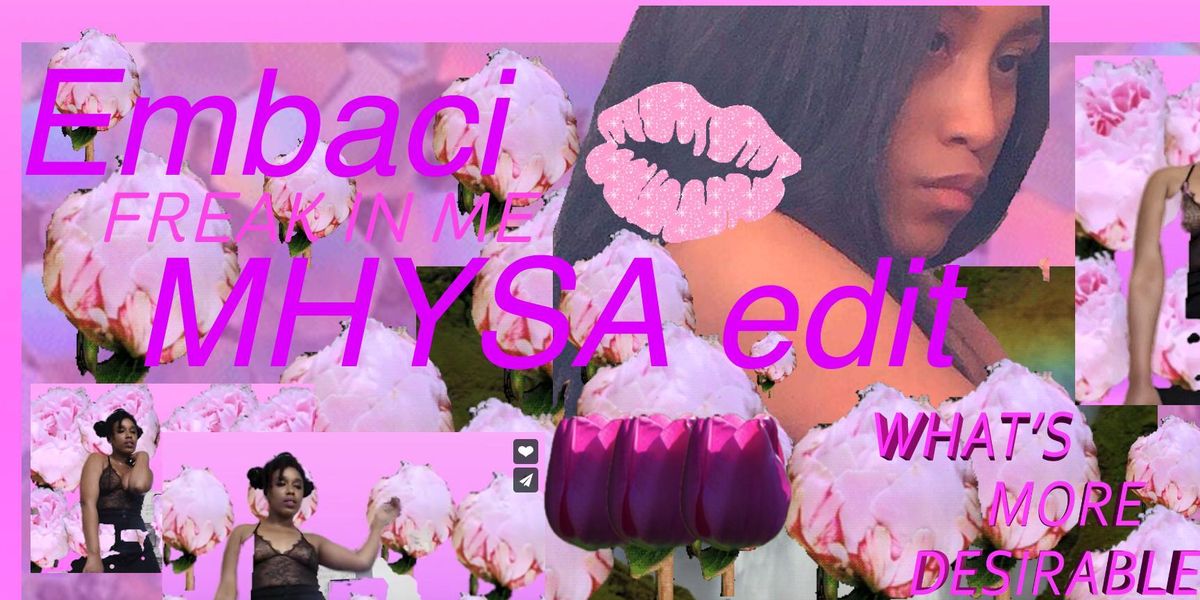 Two Artists, One Song: Embaci and Mhysa Debut “Freak In Me”


Embaci (Mhysa edit) - Freak In Me


Mhysa is a Black femme producer and underground popstar for the cyber resistance who has a residency at Philadelphia's ATM club night.

Recently she co-produced a song with Lao from NAAFI, TYGAPAW and Skyshaker at Red Bull Studios in New York, during the NON takeover of Red Bull studios. Chino Amobi brought them all into the studio and they recorded an artist named Embaci singing a few verses over the beat. Each artist took the files home and made their own versions.

This is the multimedia debut of Mhysa's version, which she gave the name "Freak In Me," based on Embaci's lyrics. We asked the artists a few questions about the track, its multimedia rollout and what it really means to be a freak.

Who are the women on the multimedia NewHive release?

Do you think some people possess no freak or does everyone have a freak in them?

Embaci: Well, a freak is someone or something that's considered to be unusual and abnormal, and I think as humans we all do possess a part of that. But the lyric "Un-unique just a freak in me" refers to ridding a person who was inside me -- I let them cast a shadow on me and I was trying to cleanse myself of that.

softest place one earth by Embaci

If everyone unleashed their inner freak how would the world be different?

Embaci: It's a gratifying feeling when you allow yourself to just be yourself. If doing that causes you be to viewed as freak, still do it. I don't know how exactly the world would be, but I know it'd definitely be pretty interesting. But I have found microsimulations of that type of environment. Like I've been to clubs where you can just tell people feel so liberated to be themselves, to be freaks, and be honest about who they are. Places like that are church to me.

Embaci: Take in who you are. Accept it. Release it into the world.

Mhysa: I was less interested in the particularity of the flower than in its movement and color. I like the way it opens and closes like a released breath, a mouth, or a shifting hip.

Black Divas Series I by Mhysa

What do you do when you're not making music?

Mhysa: When I'm not making music, I spend a lot of time caring for myself, loving myself, and thinking about how a femme can exist free of self-judgement and survive inside of violent late-capitalism. I also perform. I recently did a B2B set with my bb DJ Haram at ATM in Philly. A few months ago we performed together at Fake Accent in New York as well.

Embaci: I recently graduated high school, so I spent most of my time there, but now I really focus on myself. I've become the center of my light and I enjoy it. Dance is paramount in my life. There are several pieces I'm choreographing now too. I want to work on making more creative spaces for POC and those in the LGBTQ community as well, because it's hard for us to find spaces where our voices are heard and respected. Honestly, I spend a lot of my time on the Internet since its how I've met most of the people I'm currently collaborating with. But I love going out -- being in the park laying in the grass or rolling down hills with my friends. Kid shit, you know? I don't want to grow up too fast.

Where can you be found online?

What are you working on now?

Mhysa: Right now, I have a few shows coming up that I'm getting ready for. Also, I released an EP in February and am thinking about music videos. That's all I can really say for now <3

Embaci: The Red Bull show in May opened up many doors for me. It's fair to say it was life changing. I met people who I'm currently working with, like Joshua Padarathsingh and I are working on a few songs right now that will be released this summer. I'm excited for more collaborations with the NON collective too. I also hope to put out an EP soon. Overall, I'm trying to continue holding onto myself and not assimilate to any negativity around me.