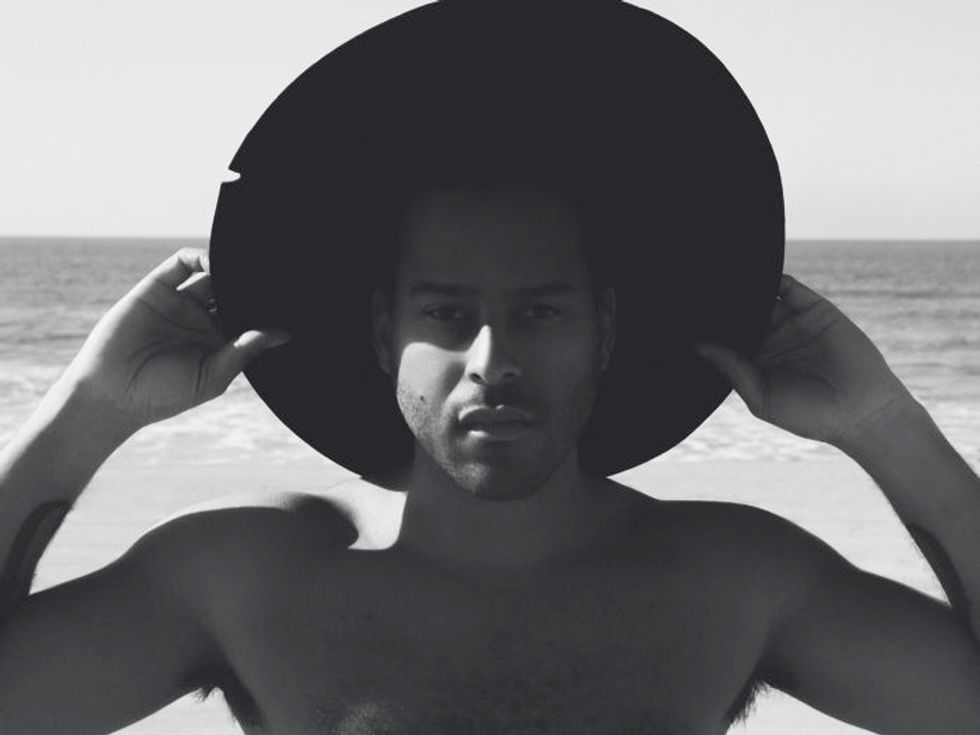 by Michael Tedder
PAPERMAG
Image: Milan Zrnic
The Lord works in mysterious ways. Sometimes, he works through Justin Bieber. George Lewis Jr., aka wounded darkwave-pop lothario Twin Shadow, was all set to name his 2012 sophomore album Believe until the Bieb beat him to the punch. He ended up titling it Confess, which better fit the emotional bloodletting Lewis was engaged in. That album was written after the deterioration of several relationships in his life following the release of his debut album, 2010's Forget, released via the legendary indie 4AD. Eclipse, his new album and his first for Warner Brothers, is his most direct effort yet, one that finds him trying to connect, be it with an estranged lover or a higher power. (He's fine with either reading.) Though he left New York a few years ago for a sunnier climate, we caught up with Lewis at the Lower East Side diner Schiller's to talk about trying to connect to something bigger than himself.
So you're from Florida. What part?

I grew up in Venice, which is south of Sarasota.
What was that like?

It was weird. It was pretty lonely, because I grew up on an island. It's like a manmade island. It used to be a military base, actually. It was a lot of old people, as most of Florida is. There were seven kids I knew on the entire island. So it was strange. Obviously, I spent a lot of time with my sisters. I have three sisters. My friend group was my sisters and whoever else was on my block. It was strange. A lot of people don't think of southern Florida as redneck country, but it really was.
So we're talking for our "Do You Believe" issue. Would you say your spirituality has been important to you and your work?

I was one of those kids who was sent to Jesus camp, so I spent a lot of my youth in and out of church, and I sang in the choir. That's really where I started singing for the first time. And at one point I even wanted to be a minister, when I was 13 years old.
What denomination?

It would've been like Christian, Presbyterian.
Did you want to do these things, or did your family push you?

No, that's the interesting part. My family, we always joke about this. The only reason we went to church camp was because we weren't wealthy enough to go on paid vacations or camp where kids go snowboarding. So instead, we went to these church camps, which were free. We always joke about how whenever the kids came back from these camps, we would tell our parents about the great experiences we had, and they would suddenly become more religious. My mother grew up Catholic, and my father grew up Jewish, so it's interesting for them to see us get into the Presbyterian vibe. But then it was like a light switch that shut off. At some point, and I kind of joke and say that it's around the time that I picked up a guitar, which is totally true, the light switch just went out on the whole entire belief system and my belief in anything.
Did you get into religion because you were lonely, and at least you had friends at the church camp?

Yeah, for sure. And the first time I saw a girl naked was at church camp. [laughs]
And then once you got into punk, you got even more friends.

Actually, not really. I almost got more separated from the friends that I had, because at the time my friends were getting into drum and bass and electronic music and going to raves, which I went to all the time also, and it's interesting because at that time I was into punk and my friends were all into electronic music, but I would go with them to everything. And so I was actually more exposed at that time to electronic music. I wasn't going to punk shows quite yet. Then when I was 26 and I went to Europe and went to raves, it was like coming back home in a way. It's strange how what you like pushes and pulls you.
What would you consider yourself today? An atheist? A Christian?

I'd say that I'm an atheist trying not to be an atheist. I'm now at a point where I'm looking for spiritual channels. I was just talking earlier today about when I write a song, I usually mumble the lyrics first, and almost always from one listen of that mumbling, I record it and I listen to it, and almost immediately I can hear every single word that I'm meaning to say.
Interesting.

And I'm always blown away by that. And yeah you could chalk that up to science, I suppose. There's many layers into the subconscious, and your voice is its closet outlet, so you're getting this mushed up version of your subconscious. For me, it's really this channeling thing. When it happens, it really feels like a spiritual experience. I have this feeling that I am connecting to a higher power, whether that's in myself or a God inside myself. I want to push myself back into those modes of thinking. Because the aftermath of having one of those experiences is so much better than putting up walls and being cynical and not believing in anything at all.
Did you feel like you were doing that for a while, putting up walls and not believing?

Oh yeah. That was the funny part of the Confess record. Had I titled it Believe, it would've been a sarcastic statement, because never in my life have I been so cynical as I was on that record.
Why do you think that is?

It had a lot to do with the first year of Twin Shadow, getting some recognition, being out on the road constantly. It tested all my relationships: family, friends, lovers. It stretched everything thin, and these were all things that I believed in -- things that I thought were constant, relationships I thought were bulletproof. And then you find out that none of them are. Realizing that, while I was out on the road, I didn't have the support I thought I had. People assumed certain things about me because I was living this different life. A lot of old friends put up judgment, and I also judged friends. So I was left with this bad taste in my mouth and stuck writing about only that. So that record was just like... I'm happy that I had an outlet for it. It's a document of that belief system completely falling to pieces.
Music is supposed to be pure expression. But when you see what the industry does to people, what you have to do to sell that music, it can be really disillusioning to people.

Totally, and it's so crazy now too because we have so much information and I always say my name for this generation is the behind-the-scenes generation, the DVD-extras generation. We got to see all the Behind the Musics. We got to hear all the stories, read all the famous biographies, autobiographies of great leaders and famous people of the last century and you think that you learn enough from hearing those stories, but then it doesn't matter how much you know. You go through it. Getting recognition and being part of any industry will break you in some way. There's no way around it.
It's human nature.

Exactly. It's a new pattern that you have to learn to deal with. So I think that what's cool about it is that it's almost like a new life to live, you know? Once you're in it, that is your new life. You have to learn how to navigate that and build a new constitution.
So your last album was about how you didn't believe in anything, and now you're in a place where you don't really believe in anything, but you'd like to, maybe. Is that something that informs Eclipse?

It definitely does. I can tell already that this record is a more hopeful record. There's a track on it called "I'm Ready," and the hook on it goes "I'm right here / I'm ready." The record is very earnest, I think. I don't think there's any sarcasm at all. There's moments of being cynical, just like I am, but there's also the hope that something great will happen.

Eclipse is out March 17th.
You May Also Like
Music