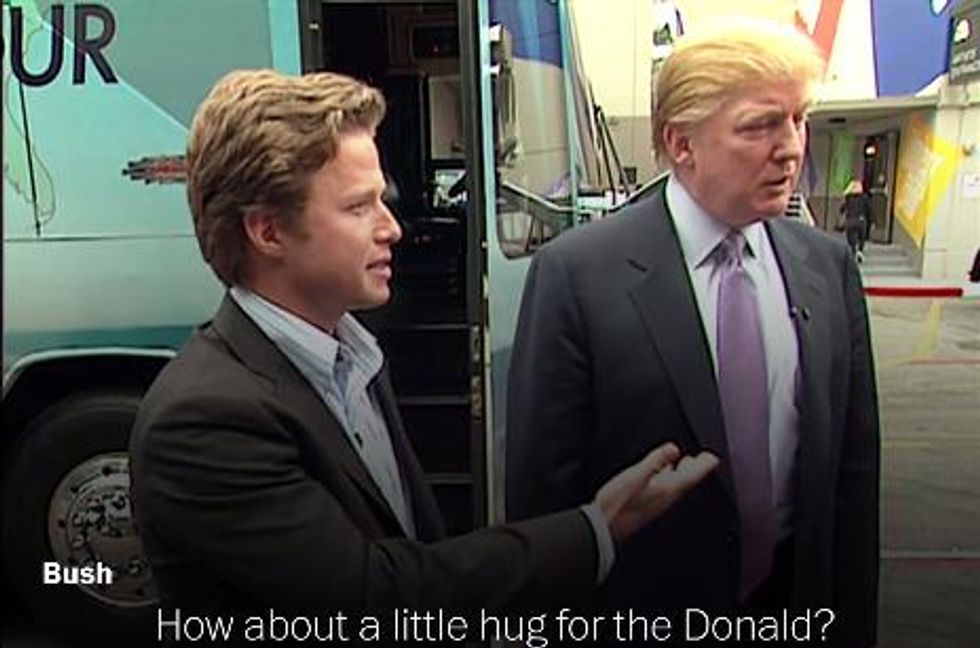 2005 Recording Of Trump Having Sexually Degrading Conversation About Women Emerges

The Washington Post has obtained "b-roll" audio of Trump engaged in a graphically explicit conversation about trying to sleep with women while filming a segment for Access Hollywood in 2005. In the clip, you can hear the Republican Nominee for President going in full frat boy mode with one of the show's former hosts Billy Bush--who is now a host of The Today Show, and a member of that Bush family--as the two were on their way to the set of the soap opera Days of Our Lives.

The duo appear to be on the topic of how easy it is to rake in the lady love once you're famous.

It's noted that this occurred several months after Trump married his current wife, Melania.

Here are some quotes:

TRUMP: I moved on her and I failed. I'll admit it. I did try and f--- her. And I moved on her very heavily. In fact, I took her out furniture shopping. She wanted to get some furniture. I said, 'I'll show you where they have some nice furniture. I moved on her like a bitch, but I couldn't get there. And she was married. Then all of a sudden I see her, she's now got the big phony tits and everything. She's totally changed her look.

Upon seeing the actress Adrienne Zucker, who is waiting to escort Mr. Trump to the show's set.

TRUMP: I've gotta use some tic tacs, just in case I start kissing her. You know I'm automatically attracted to beautiful -- I just start kissing them. It's like a magnet. Just kiss. I don't even wait. And when you're a star they let you do it. You can do anything.

This is then agreed on by BILLY BUSH: Whatever you want.

*Then the real kicker*

TRUMP: Grab them by the pussy. You can do anything.

When they greet Zucker, Bush, at one point, says "How about a hug for the Donald?" The glee in Bush's voice--the genuine reverence for Trump's words, is almost as disgusting as what Trump said.

Trump, who's been reminding time, and time again, that his opponent, Hillary Clinton, is married to "the single greatest abuser of women in the history of politics," released this statement on the tape:

This was locker room banter, a private conversation that took place many years ago. Bill Clinton has said far worse to me on the golf course - not even close. I apologize if anyone was offended.

Trump managed to squeeze in "golf course" in that statement. Bush deleted his Twitter account before the news was broken.

Also, I finally have a valid reason to say this: Fuck you, Billy Bush.

Listen to the audio below, and don't vote for Trump.