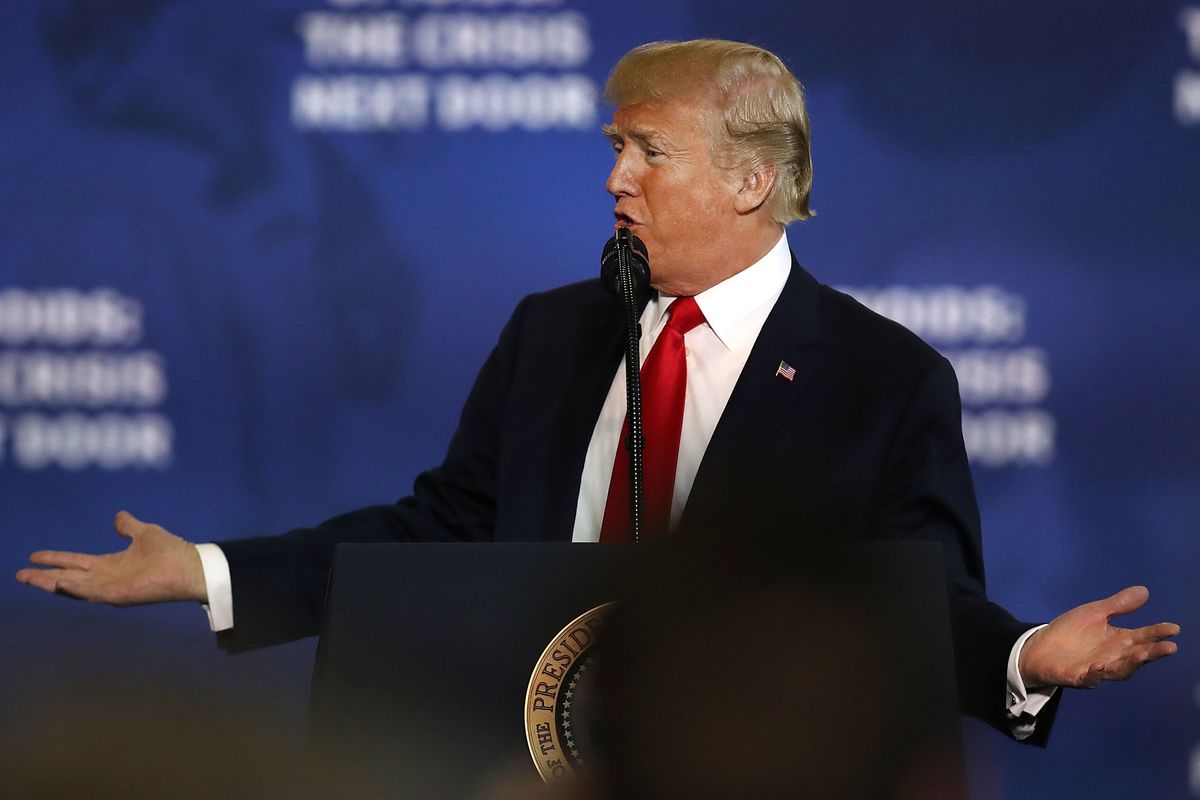 President Trump officially proposed imposing the death penalty for some drug dealers during a speech in New Hampshire on Monday. The speech was focused on the opioid addiction epidemic (which has hit New Hampshire especially hard), and Trump outlined the steps his administration plans to take to combat it, which includes the directive to "get tough" on drug dealers." Otherwise, "we are wasting our time," he said to applause before making clear "that toughness includes the death penalty."

He went on to say that dealers will "kill thousands of people during their lifetime" but won't face punishment for that.

"This is about winning a very, very tough problem and if we don't get very tough on these dealers, it is not going to happen, folks," he said. According to administration officials, the president's plan will combine harsher punishments for drug traffickers with an extensive ad campaign about addiction and more federal funding for drug treatment programs.

Trump has been in favor of sentencing certain drug traffickers to death for a long time, but public policy experts have condemned the plan before it's been fully proposed, saying that it doesn't address the root causes of the epidemic. Trump acknowledged that America might not be ready for such a punishment. "Maybe our country is not ready for that. It's possible...and I can understand it," he said. "Maybe, although personally I can't understand that."

Referring to the administration's proposed "large scale" ad campaign, he said, "The best way to beat the drug crisis is to keep people from getting hooked in the first place," Trump said. "This has been something I have been strongly in favor of—spending a lot of money on great commercials showing how bad it is."

A recently released report by the Center for Disease Control and Prevention (CDC) found that approximately 64,000 people died from drug overdoses in 2016, and that the number of American overdose deaths from opioids has quadrupled since 1999. The CDC also found that opioid overdoses increased by roughly 30% in the US between 2016 and 2017.

"Our results through September 2017 show opioid overdoses are increasing across all regions, most states for most men and women and most age groups," acting CDC director Dr. Anne Schuchat told The Guardian.

Last month, Congress appropriated $6billion in the budget to go towards combating the addiction epidemic over the next two years. It's a start, but in 2013, experts estimated that the total economic burden of prescription opioid overdoses and abuse is closer to $78 billion.

Sarah Wakeman, medical director at the Massachusetts General Hospital Substance Use Disorder Initiative, told Vox last month last month that she was skeptical of the plans and funds laid out by Congress. "It's hard to imagine $6 billion being enough, especially when you think about the annual budget for other illnesses like HIV, which is $32 billion," she said. "But even more than the amount, I worry most about the details. Investing $6 billion in interventions like greater criminalization would be not only ineffective but actually harmful. In contrast, $6 billion toward on-demand treatment, for example with buprenorphine or methadone, could result in lifesaving impact even though it wouldn't be enough money."