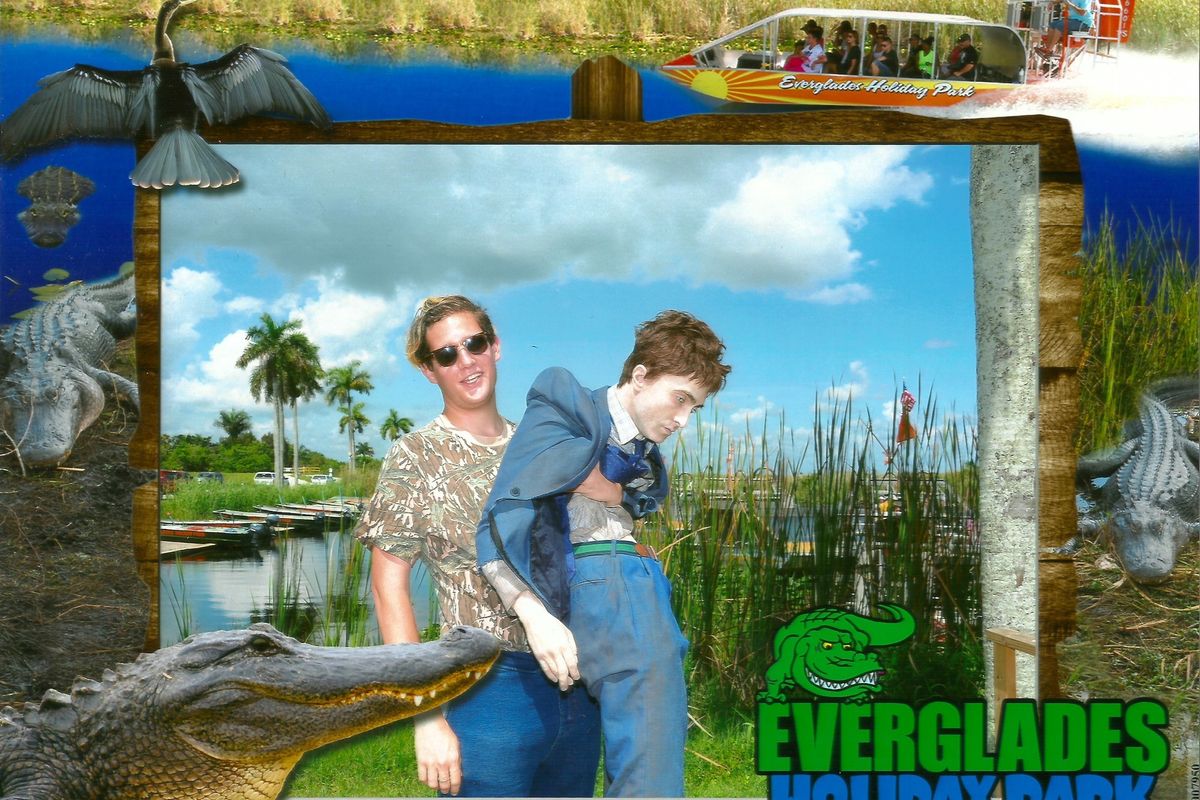 I met Manny for the first time on June 6th -- when he was thrust into my arms in a freight elevator on 27th Street. And as I carried him out into the street and experienced my first taste of what the next month of my life would be like: People glaring at me in horror, moving away from me quickly, and yelling "Is he okay?" in my general direction. I did my best to smile wide at the strangers to put them at ease as I walked down the block toward a double-decker tour bus for our first publicity stunt together, already sweating under his (literal) dead weight.


Meet Manny: He's a dummy custom-built to look like a corpse--specifically the corpse of actor Daniel Radcliffe, who you might know from his eight-movie run as the world's most famous wizard. I had been hired by the firm who was producing a marketing campaign for a new independent film Swiss Army Man, which centers on a young man lost in the wilderness, whose only companion is a flatulent corpse. The campaign concept was relatively simple, if unorthodox: I would travel the country, documenting my adventures with said life-size, hyperrealistic (but inanimate) corpse.

The itinerary included everything from the aforementioned bus tour, on which members of the press and the (live) Daniel Radcliffe joined Manny for a Q&A and some sightseeing, to posing for selfies at a Manhattan sports bar during the NBA finals. Over the course of a month, Manny would appear at various screenings and press opportunities, hang out in parks to greet the masses and get bottle-service at exclusive night clubs. There was a Barenaked Ladies concert in Central Park and a private boat tour of the Everglades. We would appear together on Good Day Chicago. I had some input on the schedule, but little insight as to how I was going to pull any of it off.

Up until I first stepped outside with Manny in my arms, I hadn't thought too much about the ways in which this project would be about scaring people, and what exactly that would mean for me as I tried to convert those feelings of fear and outrage into positives -- like potential ticket sales. I learned pretty quickly, however, that the only real currency in marketing is attention, and everyone pays attention to Daniel Radcliffe's corpse.

Daniel Radcliffe, it turns out, has an extremely large fan base. In case you forgot, he's Harry Potter. Luckily for everyone involved in Swiss Army Man, Harry Potter fans are all Hufflepuffs, which means they're extremely loyal, and their loyalty tends to reach its peak whenever Daniel Radcliffe, the IRL Boy Who Lived, is involved. Their enthusiasm knows no bounds, even when instead of real-live-Harry Potter, it's fake-dead-Harry Potter.

Everywhere I went, HP fans would appear in droves and knew exactly what I was doing without having to ask. They'd all get to work educating their clueless friends about the movie and what the corpse was doing there ("You guys, it's not a horcrux"). All this activity consistently lured a crowd of other muggles for me to explain the stunt to and thrust flyers upon, and then the cycle would repeat itself.

It turned out to be relatively easy to get people interested in the movie once they engaged with the spectacle. Even when people's initial reaction to Manny included shrieking, running in the other direction, or at least displaying a healthy dose of skepticism, one by one, they would warm up to him. Eventually they'd all end up in his lap, taking a selfie while kissing him on his scarily-real cheek. The hard part was everything else: The traveling, the hostile spectators, and having a corpse for a roommate.

I was consistently impressed by the range of reactions from people who saw Manny and I in transit. We mostly flew between cities--he as a checked bag and in what was essentially a giant tupperware container, and I in coach -- but Uber was our primary means of transportation on the ground. We'd sit together in the back seat, him slouched on my shoulder like a blacked-out friend I was making sure got home safe.

When the lighting in the uber beautiful but ur corpse is leaning on u pic.twitter.com/dXz3yDcJX8
— Ezra Glenn (@ez_rag) June 20, 2016

Lots of Uber drivers were pretty into it. Some asked to be photographed with Manny, posing in the backseat or pinned up against the hood of their RAV4. One driver was so curious about the movie that he pulled up the trailer on his phone and held it in front of his face for all of its 115 seconds while driving around the Lower East Side. Another asked for a stack of flyers to give out to his other passengers.

For every driver who was down with the gag, however, there was one who completely hated it. Often, as I stood on the sidewalk with Manny draped over my shoulder, drivers would pull up and assume he was an extremely sick or drunk person. They'd roll up their windows and step on the gas until they were far, far away from me. I tried chasing after a few of them, but my cries of "Wait, he's not real!!" went unheard (except by people on the street, who laughed at me while documenting my desperation on Snapchat). All told, my Uber rating dropped about half a star by the end of the campaign.

Most of my destinations also required traveling some distance on foot. Since he was heavy (about 50 lbs.) and the size of a normal (if pretty short) human, I mostly carried him over my shoulder, which tended to cause concern among passersby. I got pretty used to being endlessly Snapchatted while trying to navigate the winding paths of Central Park or looking for a place to sit on the Miami boardwalk. A lot of people called security, but when they arrived they never seemed bothered. The only time the police ever got involved, they just wanted a selfie.

Some people were less nonchalant about the presence of what appeared to be a dead guy. Choruses of "you're disgusting," "get the fuck out of here," and "what's wrong with you?" followed me everywhere. It's hard to convince someone to go see a movie when they think you're tossing around a literal human carcass, but I did my best to assuage their concerns.

The drunker the audience, the stronger and more upsetting the reactions tended to be. People were especially fond of grabbing Manny's foam crotch and shouting things at their friends like like "Put his face in your pussy!" or "Let's fuck Harry Potter!" This nasty enthusiasm often manifested as violence, and on more than one occasion I had to rescue Manny from belligerent visitors for fear of him becoming damaged or disfigured.

To make matters worse, the wear-and-tear of being touched by wild strangers doing it for the 'gram made him look more dead every day. Weeks of travel and manhandling took a serious toll. "He has teeth!" countless people shrieked as they shoved their fingers into his mouth, which resulted in his silicone face tearing open at the corners of his lips. The wires that made Manny's hands poseable started protruding from his fingertips like a bootleg Wolverine. All of his limbs were detached from his torso by the second week, so his entire body was held together by his clothing. And finally, outside the White House, the mechanism holding his head in place detached from his neck. Hundreds of tourists scowled at me, waiting for the decapitated celebrity lookalike to get out of their #patriotic selfies. I rushed him to the safety of my rental car -- which was actually very far away because you're not allowed to park near the White House -- and called Dr. Frankenstein himself for advice.

Getting his head re-attached was a surgery I was both practically and spiritually unprepared to perform, but I am proud to say it was a success. It required quite a bit improvisation and an equal amount of silicone caulk. It was one of many challenges I could not have anticipated when I got this job, but I'm proud to have weathered the various storms with relative success.

At the end of each day, I carried him up the stairs to my apartment and deposited him on the couch, where he'd sit vacantly until the next day's junket. Having to be roommates with Manny was perhaps the strangest part of the whole gig. No matter how long it had been, coming home to my apartment and seeing a man sitting in the darkness was never chill. Even when I covered him with a sheet or his shipping container, the pair of feet peeking out in my hotel rooms scared me literally every time.

The gig came to an end with the July 1 nationwide release of the film, and I was ready for it to be over. It ended up feeling something like a cross between performance art and a long-term psychological study of how people react to a man hauling a maybe-famous dead body. I learned a lot of things in the process, not least among them head reattachment surgery, but what really surprised me was how successful the campaign was. I watched an astonishing number of people become convinced to go see this movie based on the strength of their interaction with what was basically a spooky doll that didn't do anything. I'd like to think I had something to do with it, too, but I don't know--I'm just a part-time freelance dummy handler.