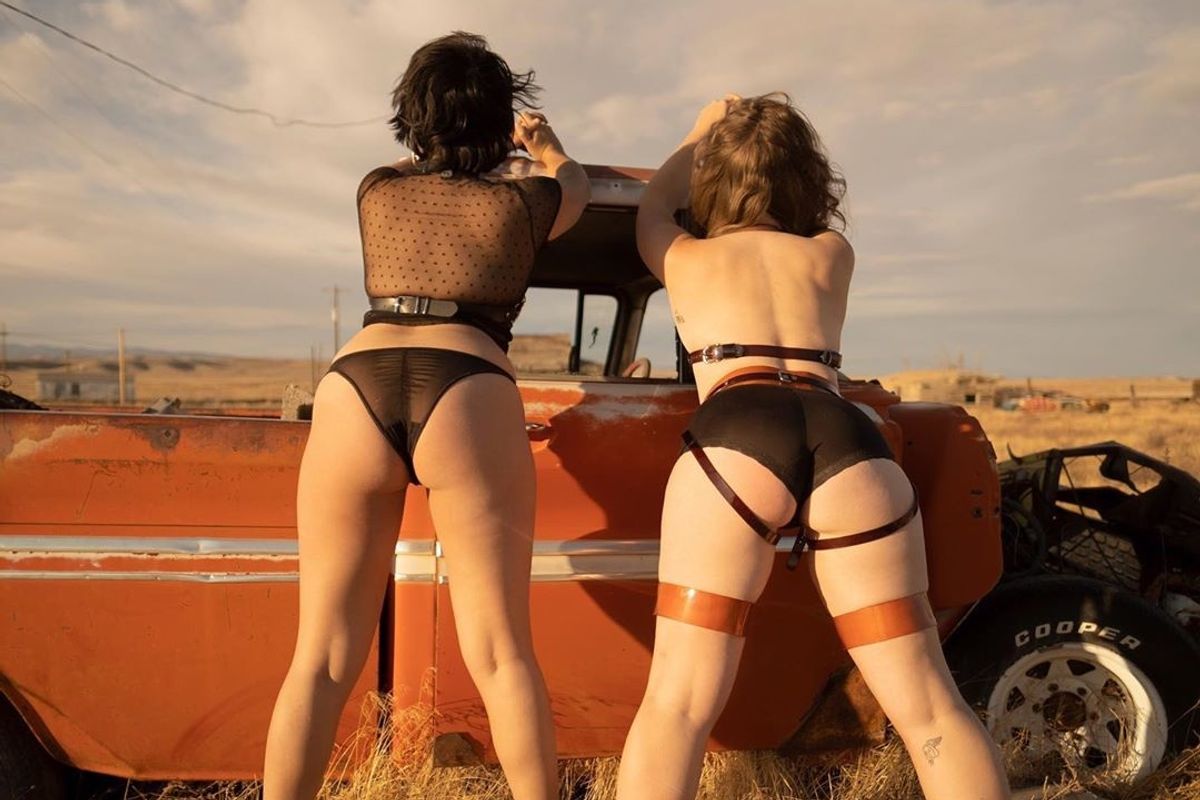 It's a welcome reclamation, but as high-end designers and major labels cash in, the trickle down effect is slow. Day-to-day existence in rural US towns remains difficult for many marginalized people, and those of them who self-identify with the country lifestyle are rarely embraced by their straight white counterparts. Except on the Instagram account @TruckSlutsMag, where gay "rednecks" are out and proud.

Growing up in '80s and '90s middle-of-nowhere Oklahoma, account founder Tiffany Saint-Bunny experienced that isolation — and then some — firsthand. She understood from a young age that she wasn't a welcome participant in the more stereotypically straight rituals of small town life.​

"People say you can't be a gay redneck," she tells PAPER, laughing. "You're not allowed to go hunting if you're a fuckin' homo or a trans homo."

Saint-Bunny has consistently refused to surrender her hobbies to bigots. "It's my fucking birthright to be around cool trucks and have cool trucks," she declares. Nearly 30 thousand folks have joined her in taking back redneck culture for QTBIPOC by following the account.

Truck Sluts is a virtual community for rural folks othered by the culture's white, cishet gatekeepers. They're united not only by a love of trucks (and sometimes wagons, conversion vans, and tractors, too), but also by ethics like body positivity, sexual agency, and righteous self-love.

It’s Monday and here’s a cheeky submission from the south: “Here’s me and my left butt! Was checkin my brake oil and my Levi’s broke after four years of service, rip. This is our 1991 Dodge Ram 3500. We like not having her run out of brake fluid and going off a cliff (this happened a few months ago but everyone was fine and she’s back in commission!). We got her off craigslist and had to scrape a big ol confederate flag off the ceiling, but now she transports queers and steers around our rural southern town! Xoxo - @registerjordang” - #idratherbecumminthanstrokin #gayrednecksonly #southerncumfert #assmasterclassic #horny4cornbread #makingtrucksgay #truckslutsmagazine #truckslutsmag

The photos, taken by Saint-Bunny herself or submitted by followers, are sometimes sweet, sometimes seductive, and at other times an especially campy type of raunch — like the shot of someone pouring sweet tea on the bare ass of a friend, both of them atop a Nissan truck, butts branded T4T.

Another post celebrates the 6.9-year anniversary of a couple, a trans femme and a non-binary femme, while an earlier one includes a quote from the person who submitted the photo, giving thanks to @TruckSlutsMag for facilitating a romantic connection.

Related | This Short Film Asks: Why Can't I Be a Chinese Cowboy?

There is a corner of Instagram long-since staked out by stereotypical truck lovers, and it's totally radioactive with the Trump-voting, Confederate flag-waving toxicity Saint-Bunny rails against. But the queerdos of Truck Sluts challenge all that, sprawled out on truck hoods, sunning in truck beds, or posing more simply, giving emphasis to a seemingly endless desert backdrop. On name alone, the account is a trojan horse to infiltrate Instagram searches; Truck Sluts posts show up right alongside those from accounts run by bigots.

"[Truck Sluts] pisses off fucking assholes. It makes these hyper-masculine, Trump lovers real mad. They get real mad when they see a homo, a queer, a trans person, a person of color — anyone that isn't a straight white man, or one of their fucking models that they like to put on their trucks at truck shows — they get fucking mad," Saint-Bunny says. "And I love it."

Bunny, who relocated to Oakland not long ago, vividly recalls her upbringing in a tiny Kansas border town were she faced poverty and intergenerational abuse. Knowing early on that she was trans made her hyper aware of the region's rampant homophobia and transphobia. She was 11 years old when news broke that Brandon Teena, a trans man, had been murdered in Humbolt, Nebraska. Five years later Matthew Shephard, a gay 21-year-old, was tortured and left on a fencepost to die near Laramie, Wyoming.

"I remember seeing [Matthew Shephard's death] on the news, and my mom just being like, 'If you ever turn out to be a f*****, I'll fucking kill you myself,'" Saint-Bunny recalls.

I got a submission the other day from a buncha individually anonymous queer veggie farmers up in Western Mass who said: “Five speed standard shift transmission for all our farming and slutting needs— Dirty on the inside and out. 5 sluts, 2 seats, 1 truck, @just_roots” . 📸: @dawnydonnie . Well, y’all can till MY field any time, if u know what I mean ¯\_(ツ)_/¯. Also I’m fully ready to get gay married to ur farm truck because it’s BEAUTIFUL 👀👅💋 . #tillmyfield #hoemyrow #hiluxhussies #workwearfetish #carharttandlace #homeiswhereholeis #farmgays #truckslutsmag

She escaped by joining the army at 17, a decision she credits to desperation and lack of education about student loans. She later attended Oklahoma State. It's a period during which she can't remember how many times "some motherfucker tried to run me over" in his truck.

"More than anything, I wish I could take [redneck culture] away from them. They value that shit so much, I just want to rip it away from them, just to hurt them," she says. "I guess that's part of what this is — obviously I feel some kind of way, and I have a lot of feelings about those guys in my life, these men in my life, and getting back at them feels fucking awesome to me."

Grad school and several stretches working on cooperative farms later, by 2016 Saint-Bunny was living in Portland, where "everyone drives a Subaru or a fucking Prius," she laughs. That's when she created Truck Sluts, originally just as a means of showcasing "cool trucks." The account's initial group of followers came from a network of friends, but a shoutout on popular platform Queer Appalachia gained it a huge new audience.

Saint-Bunny's still operating Truck Sluts solo, but maybe not for long. The project has become bigger than her: a channel that can offer friendships, artistic connections, or chosen family for every potentially isolated rural queer.

"They need to see they're not alone," she says. "That they exist among people like them, that there is a history [of] people that have come before them, and will exist beyond them."

Thinking back to her own coming of age, she sighs. "What I would have done to have something like Truck Sluts."

With every bump in visibility the Truck Sluts account gets, the potential for shadowbanning and policing by Instagram inevitably increases. Salty's recent investigation shows how "risque" content from the accounts of LGBTQIA+ people, with emphasis on bigger bodies and those of color, is disproportionately flagged and removed compared to other groups.

"I've had a lot of posts removed," Saint-Bunny says. "Out of all of them, all but one of them that got removed featured trans people. They almost never remove photos of cis people. The only one that ever got removed that I can think of is like there was menstrual blood showing on her underwear."

Saint-Bunny laments that entire queer histories have been erased from Instagram. She won't leave the platform, but is in the process of creating a physical magazine version of Truck Sluts that she'll publish next year. The message is too important to lose.

"There's a huge conflation of that toxic masculinity, patriarchy, racism, and white supremacy with the signifiers of the culture," Saint-Bunny says. "But driving a truck doesn't make you a racist. Being from the country doesn't make you straight. Everyone can be their own person. It is kind of redefining it, in a way, I suppose. And I'm not the only one. I'm just the one that blew up about it on Instagram."