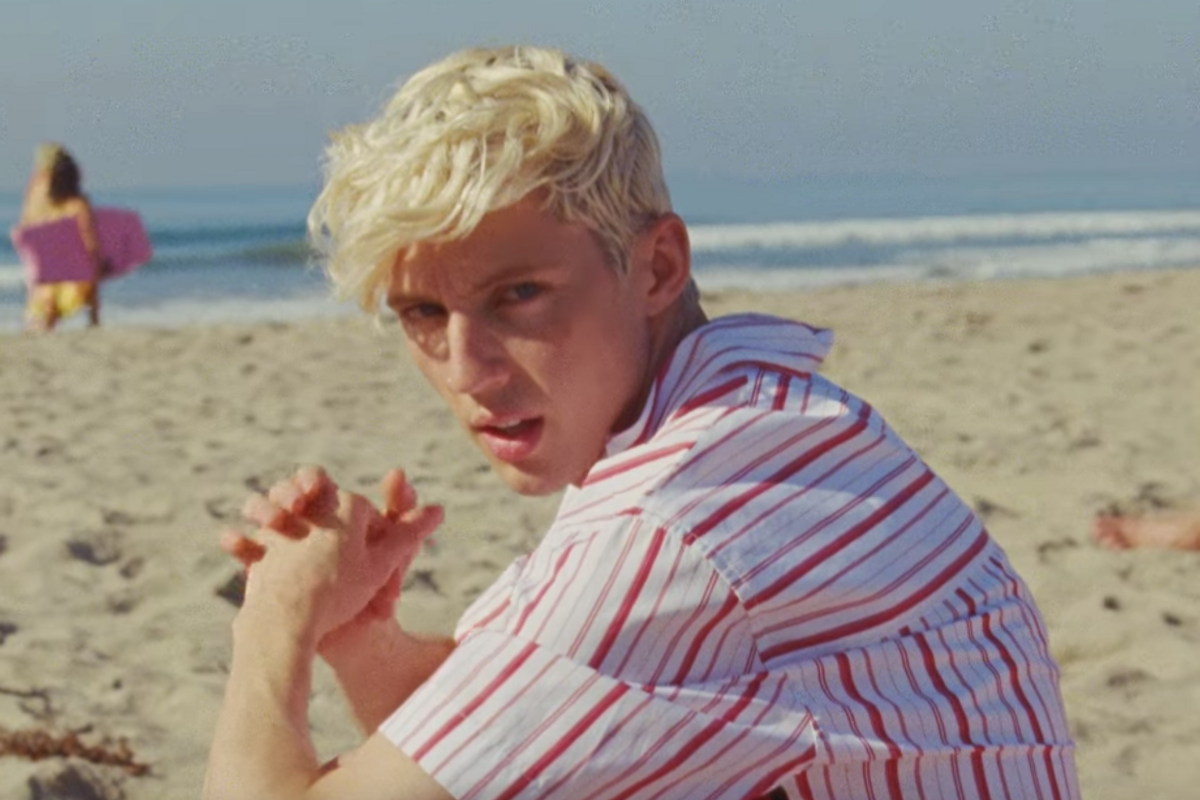 Troye Sivan is back to warm your winter blues with his newest visual for "Lucky Strike," the atmospheric dance cut from 2018's Bloom. Hyperreal expressions of love and lust have become a trademarks of Sivan's visuals in the dawn of his commercial success, and "Lucky Strike" is no exception. While at once invoking a familiar, teen-beach-movie storyline, the video also presents surreal camera-work and imagery, including surprisingly delicious-looking bleeding heart cocktails. All parts considered, the summertime romp is a tense, yet tender, trip through a queer summer fling.

Oh, and the ever-dreamy Brandon Good takes his shirt off — a lot.

The video was directed by Emma Westenberg, who also struck music video gold last year with Janelle Monae's "PYNK," so it comes as no surprise that "Lucky Strike" is equally as stunning. The soft pastels that light a sun-kissed Sivan and his lover are contrasted with the striking, saturated reds of the beach shack bar and the beating human heart being juiced into patrons' drinks. Sivan doesn't seem to mind the obscure drink ingredients, though, which one can only assume is because of the muscle-bound bartender, played by Good.

The two fall in love over blood cocktails, after which Good strips down to a Speedo. The two then proceed to set sail in a pillow-laden rowboat, while Sivan sings the bridge in Good's arms. The summer love concludes with a dance party in the sand, where each beachgoer gets the chance to beg viewers with the sultry chorus: "Tell me all the ways to love you."

"Lucky Strike," as a song, lends itself perfectly to the story being told in the video; bright synths are interspersed throughout Sivan's soft vocals, which themselves are made anthemic by the catchy, longing hook. While it may seem on the surface to be a fairly formulaic video, with a story told in the same vein of classics like "Summer Lovin'" from Grease, the differences are in the details. For example, despite Sivan's shirt getting stained as a result of his love-infused cocktail, the entire cast of "Lucky Strike," look particularly well-dressed throughout, which upon further inspection is thanks to the genderless, Amsterdam-based denim brand, Hardeman.

The intentional choice to utilize a LGBTQ-friendly label for costumes underscores Sivan's dedication to creating a culture of inclusivity in his works. Sivan recently starred in the critically acclaimed film Boy Erased, which spoke to an enduring culture of homophobia for young gay people, as well as subsequent trauma incurred as a result of conversion therapy. Along with Jónsi and pop powerhouse Leland, Sivan penned the Golden Globe-nominated Best Original Song, "Revelation," from the film. Sivan's own commitment to telling a multitude of queer narratives in his own songs and visuals, as well as in Boy Erased, is a step forward for the pop music industry as a whole, with a focus on inclusivity for people holding many, intersecting identities.

While "Lucky Strike" isn't the brand new music Troye Sivan stans are already begging for, it'll hold us over until we can get our hands on whatever he's been writing as a follow-up to Bloom, his highest-charting release to date.