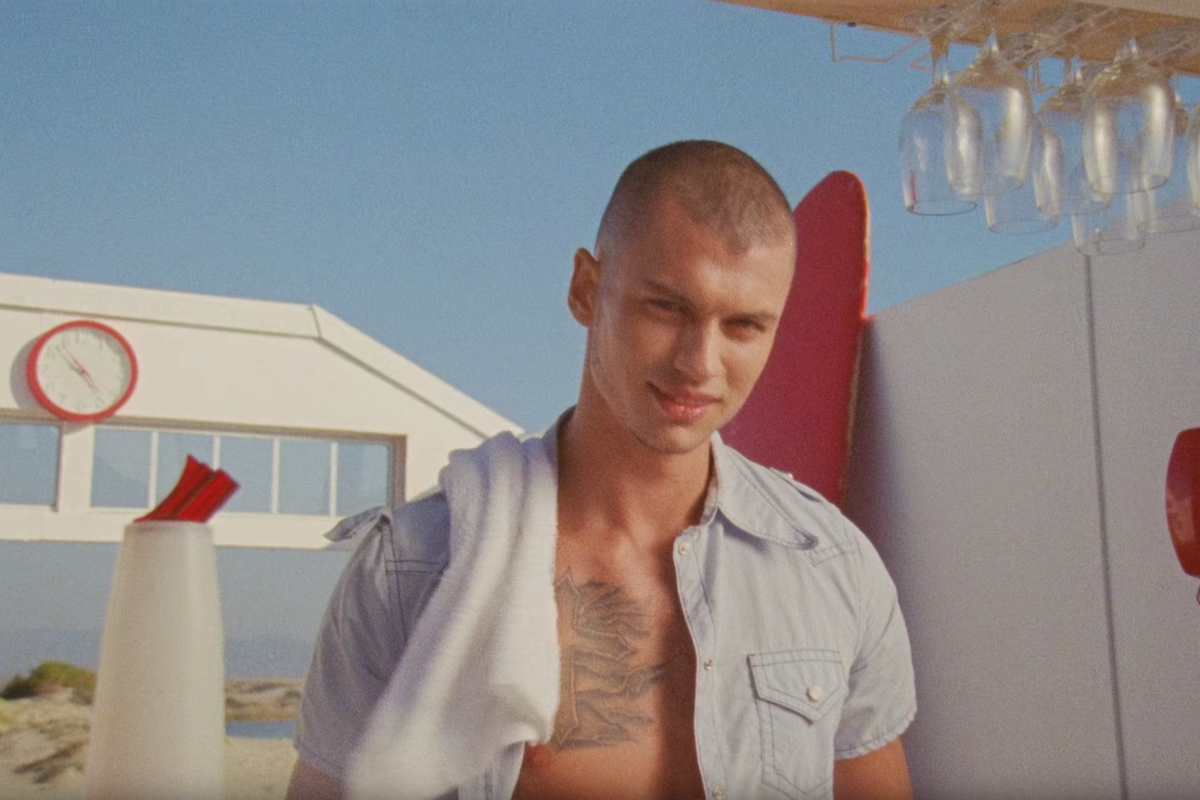 This week saw the premiere of Troye Sivan's fourth music video from his sophomore album Bloom, putting the fan favorite "Lucky Strike" front and center. The downtempo dance-pop cut seemed to get lost in the shuffle of great tracks off Bloom when it was released back in August 2018, despite packing just as much punch as the worldwide hit "My My My!"

The drop of the newest visual sent stans into a frenzy over several details — many obsessed over the aesthetically pleasing the shots of the beach and the water, which were all thanks to director Emma Westenberg and colorist Nick Lareau.

Then, there were the stans obsessed with Sivan's love interest in the video, model Brandon Good. Stan accounts went crazy posting screenshots of the muscly, tattooed bartender romancing Sivan while running in a speedo and whipping up bleeding heart cocktails.

PAPER talked with the Good to learn about how he keeps in shape, his interesting foray into modeling, and his love of Sivan's music.

How old are you? Where are you located?

I'm 25 and currently located in LA.

Can you tell us a bit about how you first got into modeling?

I met a scout/photographer close to where I'm from in Pittsburgh. He thought I had potential as a model, and wanted to do a photoshoot to see if I was as photogenic as he thought I looked. Technically that was my first ever shoot. I really had no idea what I was doing and was beyond awkward in front of the camera. He submitted my photos to an agency in New York — I eventually got signed and immediately relocated to New York. After landing in the city, I quickly found myself working for some of the best fashion houses and creatives in the industry like Moschino and Nicola Formichetti.

Were you a fan of Troye before working on "Lucky Strike"?

Troye is a global pop star, and his music is everywhere. I definitely have have heard and enjoyed his music in the past, I just couldn't name who the artist was behind them back then. Honestly, I've never really been the best at placing artists to songs. After I met and heard Troye sing live with the song during our first scene together, I can without a doubt say that I'm a huge fan.

You looked amazing in the video. Do you have a background in fitness?

I work out every day. I strangely get excited to go throw around some weights. I got into training hard at a young age, being so involved in sports. Football was my main focus and my weight coaches in college taught me a lot. I always felt a little smaller and weaker than my peers, so I would set weight and max goals to gain the mental edge I needed. I think that's what's helped me the most with maintaining and setting new fitness goals.

What are your plans for the future?

I still have a bunch of goals that I want to accomplish in modeling, so I'll continue chasing them for as long as the industry will have me. At the same time, I definitely want to pursue acting and make it a focus this year — especially now that I'm based in LA.