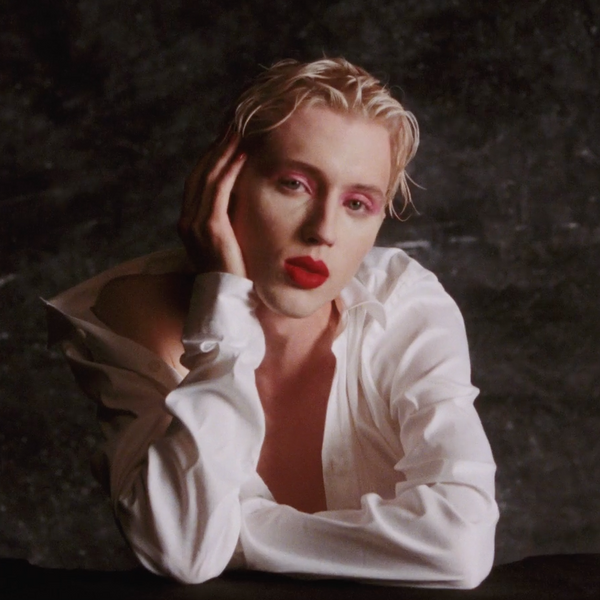 Holy Mother of Gawdess, this is iconic. Swiftly rising Aussie queer icon Troye Sivan drops the video for "Bloom," his '80s-tinged bopalong single extolling the virtues and innumerable joys of bottoming, using cheeky floral metaphors to drive his points home. And it's enough to make those of us moving through the world as gender nonconformists (hi!) jealous we don't always have the budget, while also celebrating every frame of this for the triumph it is. "Bloom" is also is a big, gleefully-raised middle finger to the establishment, aka those who simply can't fathom the incredible chicness of it and are thusly, left gagging with no water.

Directed by frequent Vogue contributor Bardia Zeinali and styled by Kyle Luu, the visuals for "Bloom" pull from the handbooks of queer fashion and art greats like Boy George and Robert Mapplethorpe. But the glossy red lip, white shirt, and pinstriped blazer combo with slicked-back hair is so very Linda! As in Evangelista. As in supermodelle, hunty. And then there's the floral dress Sivan twirls around in at the video's climax, pun totally intended. I cannot.

What is perhaps most lovely about this video is how it acts as yet another example of what being here and being queer can really look like. In a mainstream gay landscape increasingly dominated by homogenized muscled cisgender white gay men, it's never not important to show and remind folks that those of us who bravely and deftly blur the lines of our gender identities and expectations deserve to have a seat at the table (or a twirl at the circuit party), too. It's the perfect message of inclusion for Pride, and though Troye is white, which he of course can't help, his visibly genderqueer presentation adds much-needed intersectional layers to LGBTQ discussions around whose voices get centered and why. "Bloom" may not change the world, but for me, it's always so nice to see that we are truly just out here.