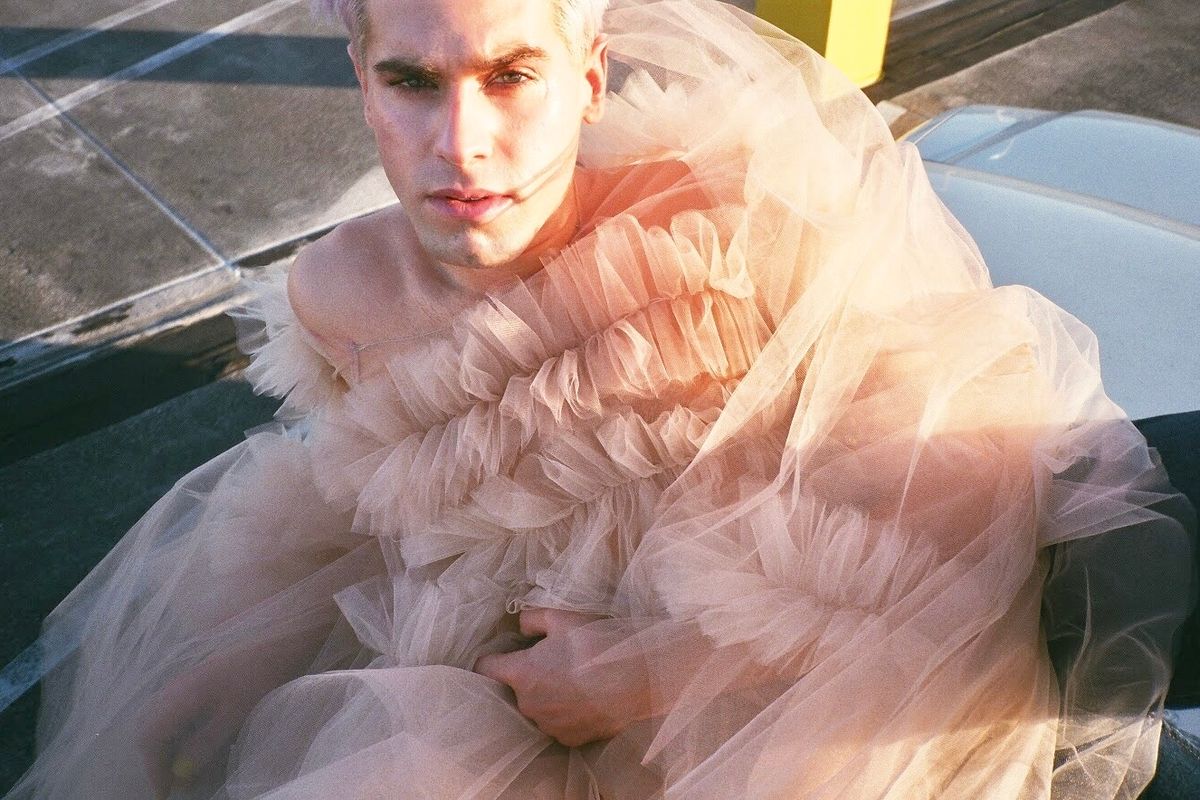 Drawing on his experience growing up as a queer man in Savannah, Georgia, SCAD student and fashion designer Troy Allen sees his garments as "show pieces" that are meant for having fun and making great memories in. This was inspired by his reputation as someone who is loud and knows how to entertain. He tells PAPER, "Even though I do love going out and being social, sometimes I feel like people just see me as a rodeo clown." In this way, his clothes are also a satire of being expected to put on a show and be happy and fun when that's not always what he's feeling inside.

Allen, who launched his namesake label in 2018, started making clothes because he's "too femme to be masc and too masc to be femme," which makes it hard for him to find clothes that fit his unique sense of style. All of his designs are handmade, and his recent Spring 2019 collection speaks to a Southern aesthetic through its romantic silhouettes and pastel color palette. This sensibility landed Allen designing all of the clothes bedroom pop star Gus Dapperton has worn on his recent tour, and due to Dapperton's own fluidity and experimental fashion sense, it's a collaboration made in heaven.

PAPER spoke with Allen about his Southern upbringing, his collaboration with Dapperton and how it felt to see someone don his designs at Marc Jacobs' wedding.

What was growing up in Savannah, Georgia as a queer kid like?

I grew up in a very conservative family, and there was always a strong emphasis on being perfect. I initially went to a private Christian school, and then my parents divorced when I was in the sixth grade. I had just started navigating being queer and having that feeling that I was not the same, which led me to a really dark place. But I ended up going to a public arts school, which was a blessing because I got to see a lot of diversity that I had never been around before. I realized that there was no such thing as being normal; you could be whatever you wanted. At that time, I also started getting into ballet. I was really scared to do ballet just because I was a boy and it was the South. My parents fought about it constantly, and I just wanted to dance. I also struggled a lot with internalized homophobia. And I think it was not until really the last few months that I've been able to fully embrace who I actually want to be. You know, wearing glitter, having pink hair all the time.

"I realized that there was no such thing as being normal."

How did you get your start in fashion design?

It was actually Wicked, the musical. Every art kid had a weird connection to it. And I was in seventh grade and I had started dancing, and I was too scared to tell people that I was interested in fashion and wanted to be making the tutu's rather than dance. (I do love ballet. I still do it. I have actually have a show today.) I still to this day have not seen Wicked live. But I got the book, and I would just re-sketch all the costumes and then I showed that to my babysitter, and she was like, you should like sketch other things. Then, I got to high school and my teacher was like, why don't you design costumes, you should do that.

What's your mission with your brand?

I view it as a dream. I want it to be lighthearted and fun and give people an escape where they have the freedom to be themselves. For so long I was so afraid of dressing up and being myself, and so with my clothes, I wanted to do the opposite and embrace individuality and show people that you can do whatever you want and have fun. I want to be that person that someone can look at and say, it's okay to be myself and to have fun. I can still name the queer men and women who I looked at when I was younger. It was like, wow, they're really being their true, authentic self.

I'm constantly into the idea of exploring love and romance. Romanticism is my favorite art movement. It's quite grotesque. It's sublime terror. Obviously it's romantic, but it's also about horror and horror is my favorite movie genre. For Spring 2019, I was inspired by all my favorite women in horror, like the Carrie prom dress. I'm also interested in exploring the idea of someone who is always performing and providing for people, but isn't providing for themselves. Spring was definitely womenswear, but I'm trying move into genderless [looks].

How did you end up collaborating with Gus Dapperton? What has that experience been like for you?

I styled Gus on a shoot for my friend, Jess Farran. He's very particular about what he wears, and our styles kind of just meshed. Then a few weeks later, he asked me to do his tour looks. Before that I hadn't really done anything for boys or anything gender neutral. He really pushed me and believed in me. Gus is such a hard worker and so inspiring, so it was really great experience collaborating with him.

How did it feel to see someone wearing your designs at Marc Jacobs' wedding?

Honestly, I had a hard time processing it. It was kind of full circle, having something I made be worn at special event like his wedding; it was quite surreal. Marc Jacobs was my first exposure to fashion as a kid in the South and has always been an icon to me, so having that opportunity was really incredible.

What are your plans to expand your brand in the future?