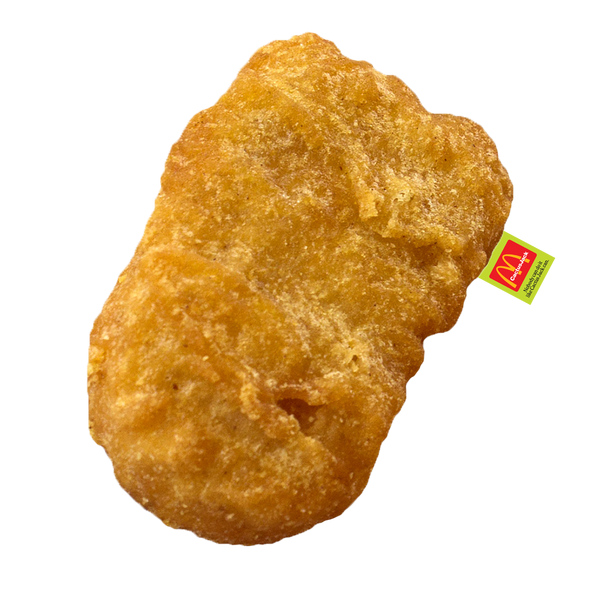 Would You Cuddle This Chicken McNugget Body Pillow?

Yesterday Travis Scott and McDonald's introduced to the Cactus Jack meal. A Quarter Pounder with cheese topped with lettuce and bacon, a medium side of fires with BBQ sauce and a extra icy Sprite all for $6, marking only the second time the world's largest fast food chain has ever collaborated with a celebrity. The internet went wild for the collab and after showing up at a California McDonald's in a Ferrari to order his namesake meal, Travis Scott was swarmed by mobs of fans.

Related | The McDonald's Travis Scott Meal Is Real and Out Now

In the interest of full editorial transparency, it is worth addressing that the this writer has previously described the Cactus Jack meal as being "underwhelming" in light of the hype and supposed scope of the collaboration was reported to have in the big lead-up. Where was the merch? The custom uniforms? My happy meal toy? Well, I stand corrected because less than a day after the Cactus Jack meal was rolled out across the country, Travis Scott has shared the first merch drop from the multi-level partnership and it is extensive.

Drawing on imagery from the current campaign as well as vintage McDonald's motifs, the new line features your standard run of shirts and hoodies with designs that range from "Cactus Jack" being spelled out in sesame seeds to the previously-teased fry graphic as well as some tie-dye faux-bootleg tees. But it doesn't stop there with a full range of bottoms including sweatpants, athletic shorts, boxers and embroidered print denim, an oversized polo, a burger tie, a work jacket and a full McDonald's/ Cactus Jack-branded basketball uniform complete with matching red basketball.

Going beyond just apparel, the drop also features a few out-of-the-box items like a metal lunchbox, plastic lunch trays, a pack of styrofoam cups, a few different rugs, a life-size cardboard cutout of the Rodeo action figure in a vortex of french fries and a body pillow shaped exactly like a Chicken McNugget (just like the one from your dreams!).

The McDonald's x Cactus Jack collection is currently on sale for a limited time while supplies last, head over to Travis Scott's webstore to shop the full drop and check out some of our favorites pieces below: