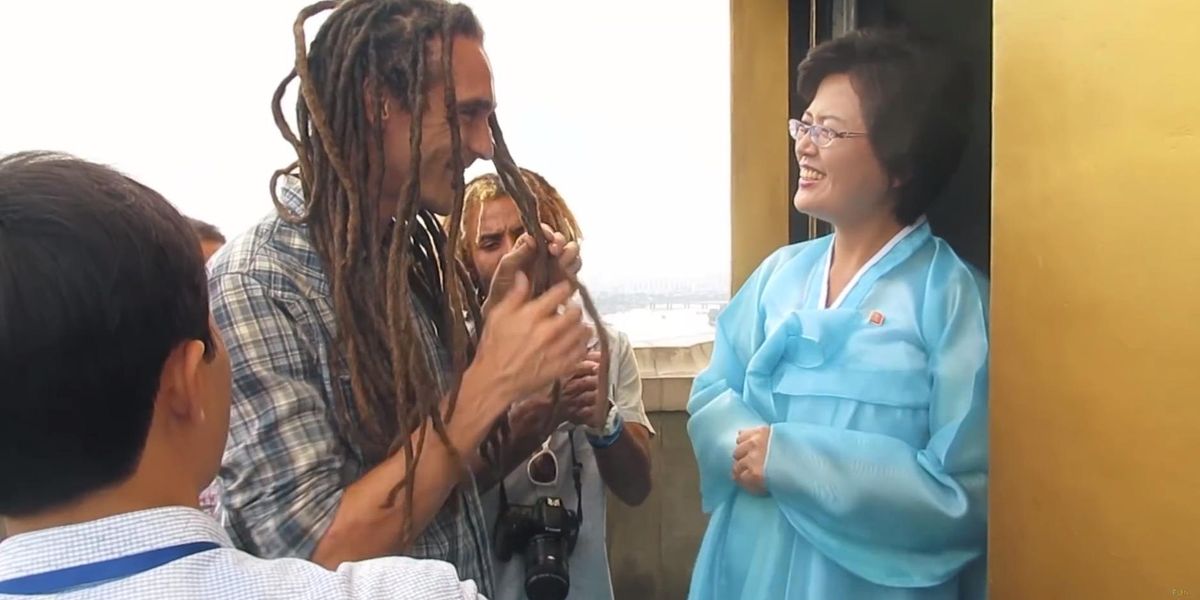 UPDATE: Presented without comment, Louis Cole and his cohort Lancifer have released a truly ghoulish music video rap about how great North Korea is.

After ALLLLL of that:

Meanwhile, here are videos of children starving in the streets of North Korea:

[UPDATE 08/17/16, 1:30 p.m.: Louis Cole has just posted a video in response to the backlash his vlogs have received. In the video, Cole says he was not invited by the government. Instead, Cole says he tagged along on a surfing trip organized by a person doing humanitarian work, whose relationship with Pyongyang he did not want to sully. He also references fellow YouTuber Philip DeFranco's analogy comparing his videos to a tour of a mansion that only shows the beautiful heated pool and completely ignores the torture and murder happening down the hall. Cole, however, sees this as an unfair comparison, saying "what about the people, in the house, that are in those rooms, in the nicer rooms? I think the only way to make a difference is to connect with those people and show them love and maybe that will impact the entire household. So if that means surfing or going on these tours, then I'm really keen to do that." You can watch his full response video below.]

Earlier today, Vanity Fair's Richard Lawson posted a smart piece on YouTube travel vlogger Louis Cole and his recent trip to North Korea. It's a strange destination for Cole, whose brand (like so many other "influencers") is centered on positivity and feel-good posts -- but how these sunny tropes fit into a place that the Human Rights Watch deems unparalleled in its oppression is unclear. Indeed, it's also giving some of his followers pause:

Comments from Cole's video "Beyond The Tourism - North Korea Day 5"

However, as Cole writes in the accompanying video descriptions, he sees these clips as a way to highlight "positive things in the country and combat the purely negative image we see in the Media." And while "fairness" and providing a "balanced perspective" is a valid argument, playing along with what another vlogger on the same trip has suggested was obviously staged is a gross stretch of these tenets.

For example, Cole has uploaded six clips from the trip -- all with zippy titles like "WATER PARK INJURY!" and "NORTH KOREAN SURFER CHICKS" -- some of which feature him indulging in multicourse meals and enjoying fancy espresso. Meanwhile, the rest of the country braces for another famine the government says will require citizen to sustain themselves on "the roots of grass."

And while there's been no official statement from Cole on whether or not his videos were "state-sponsored", it's pretty odd, as Lawson also notes, since the videos come sans critique or context. After all, North Korea is known for its scrupulous oversight of all media projections and communications, and limiting media access to create a controlled narrative.

Cole's ardent application of the "YouTube influencer" model to the country also just comes off as tragically tone-deaf. In one of the more egregious videos, Cole ghoulishly applies one of the most well-trodden, clicky YouTube tropes: pranks. At the 7:05 mark in his video "PRANKING MILITARY GUIDE! - North Korea Day 3", Cole takes a tour of a military museum and pops out to surprise his female tour guide.

So many people in the Western world are affected by North Korea's brutal sanctions, myself included. My grandmother's entire family is from North Korea, and while many emigrated to the South before the borders closed, a number of my extended family still inhabits this totalitarian state. Or maybe they don't, because we haven't been able to communicate with any of them thanks to the government's strict ban on international communications. I have no idea whether any of my cousins are one of 100,000+ political prisoners, inhabitants of a torture center or have already been murdered. But hey, the country's got great water parks.