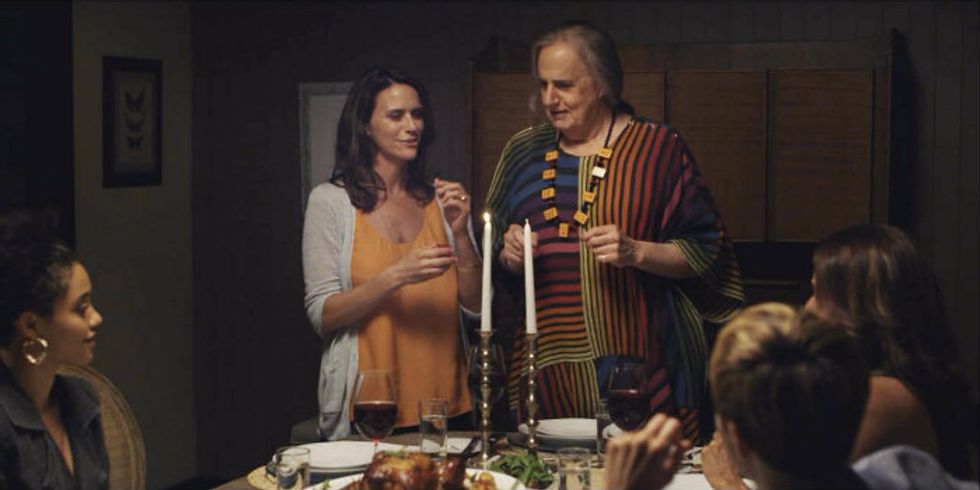 Transparent is Coming Back This Winter, Here's Why It's the Best

Today at the Television Critics' Association tour, Amazon announced that the second season of its series Transparent would become available December 4. That sounds like a long way away (and, in some respects, it is), but now it not only gives fans a day to look forward, it also lights a fire under anyone who has been meaning to get around to watching the first season. Transparent is one of the best shows around, so it really is a good investment of time. But if you haven't seen the first season yet, here are a few reasons why you should catch up:

The Family
Transparent is about the Pfefferman family, composed of matriarch Maura (Jeffrey Tambor), a trans woman in the process of discovering her new identity, Maura's ex-wife Shelly (Judith Light), and children Ali (Gaby Hoffmann), Josh (Jay Duplass) and Sarah (Amy Landecker). It would be reductive, in some sense, to say that the show is just about Maura's coming-out process -- it's about much more than that, including the family's neglectful history, the screwed-up lives of the children, and their attempts to recalibrate their relationship with Maura. It's a painful, often selfish series of emotional dynamics, but it's also honest and raw.

The Past
Where most other prestige television moves relentlessly forward -- using the past primarily as a space for ruminating on bad choices that turned good men into kinda bad men who do bad things -- Transparent presents its characters as the result of a history, and a long weight of accumulated choices. The ongoing flashback story about Maura's tentative friendship with Marcy (Bradley Whitford) blossoms into one of the best things about the show, and the eighth episode, which takes place entirely in the past, is maybe the highlight of season one.

The Music
Supervised by Soloway's husband, the music of Transparent has a pretty consistent sensibility -- Jim Croce, Bill Callahan, J.J. Cale -- that works to constantly evoke a distant, not-quite-real past. The show's soundtrack creates feelings of longing for a simpler time while everything else about the series reminds you that that simpler time never really existed.

The Clothes
Throughout the show, fashion becomes a way for characters to (literally) try on different identities and figure out who they are -- watching Maura test out different feminine clothing in the flashbacks is one of the sweetest, most delightful parts of the show. And in the present, Tambor wears a fabulous selection of caftans.

The Tribe
Transparent is, among the many other things it is, one of the best artistic depictions of modern secular Judaism. The Pfeffermans are nominally Jewish by affect, with Shelly caring about the opinion of the rabbi (welcome guest star Kathryn Hahn), who winds up in a relationship with Josh (that's them in a mikvah in the image above!). The sixth episode ends with a warm, spiritual shabbat dinner, a scene that, in its long, complicated, conversational battle, cuts to the heart of what makes the show so fantastic: its incessant, surprising empathy for everyone.