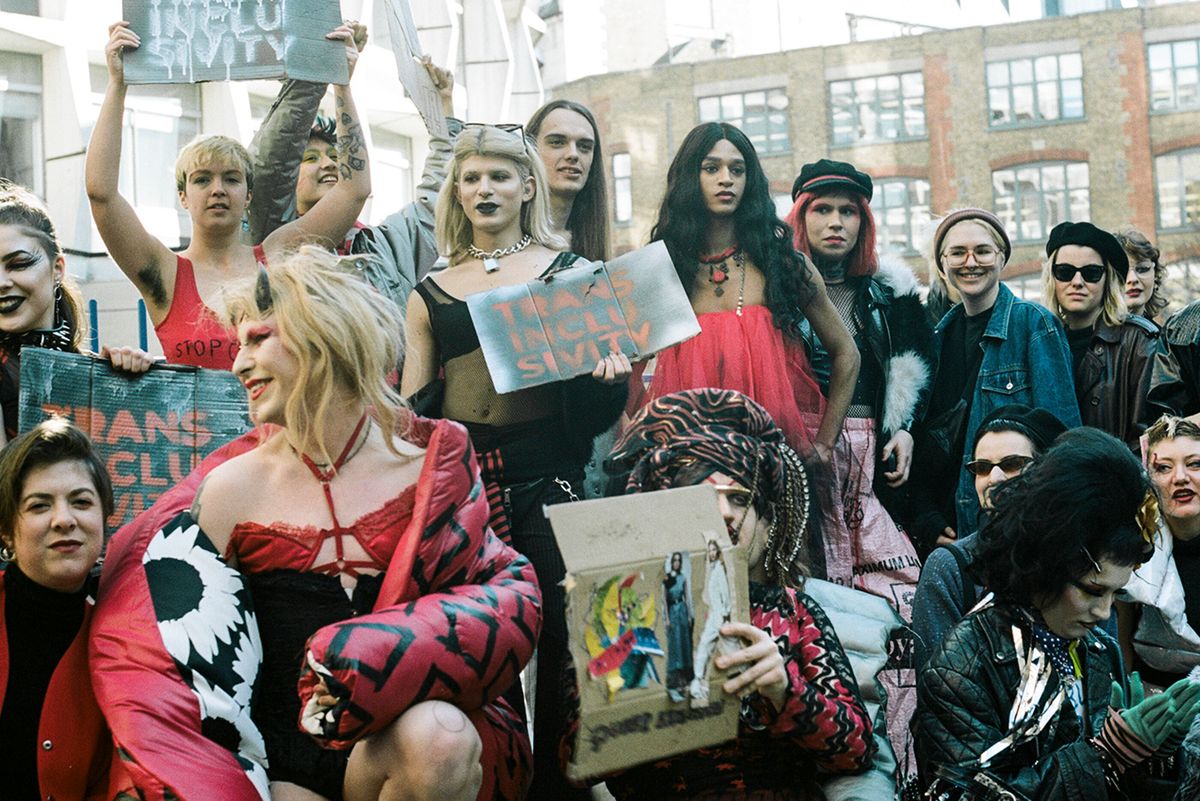 Transmissions, a trans activist group that advocates for greater and more widespread inclusion of trans people in the fashion industry, held a protest today to send a strong message as the city launches its fall 2019 Fashion Week.

Members of the group and supporters in gender nonconforming looks gathered on the Strand bearing signs reading "get us off the moodboards and put us on the covers," which, tea, highlights one of the primary aims of Transmissions: to end the stain of trans inclusivity for mere tokenism.

While spring 2019 was fashion's most inclusive season yet, in terms of age, racial, and gender diversity, trans casting still reportedly made up just over one percent of all models in shows and presentations, so clearly there is much work remaining to be done. And it should go without saying that there is a clear bias in terms of what fashion feels is acceptable for trans representation, relying on bodies who "pass," or fit more neatly into binaries than others.

Only just this season did a trans woman designer, Pierre Davis, show at New York's official fashion week for the first time, with her LA-based line, NO SESSO. Other designers, like Gogo Graham, have had to make space for themselves independently.

And in terms of models' representation, as brands like Gypsy Sport, Chromat, Charles Jeffrey, Art School, and only a smaller selection of still smaller brands show, it is definitely possible (and should become the mandatory norm, not the exception) to represent all types of bodies on runways, in editorials, and in advertisements. And it should be done, in droves, not in "safe," compact numbers that, again, only serve to tokenize the trans people who get rare placements in fashion and marginalize those who don't. Some of our biggest names in fashion — from Andreja Pejic to Munroe Bergdorf — are trans, so the time is ripe for greater representation.

As Transmissions' founder Lucia Blake tells Dazed, "the fashion industry decides what bodies are normal and which ones are not," which, of course, makes the group a perfect vehicle to help transform society's attitudes towards trans bodies. Non-passing trans models with stubble, walking runways in Paris, leading major (and not only niche) editorial campaigns, starring in luxe perfume ads on the subway and on TV, looking how they look and expressing what they express, all deserve a place in fashion, and in the world. But first, we have to see as many of them as possible.