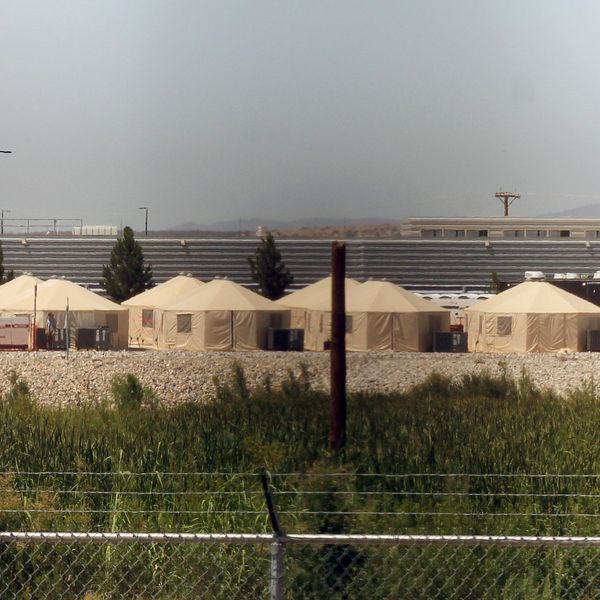 Separating Children from Parents Leads to a Lifetime of Toxic Stress

Since the Trump administration began implementing its "zero tolerance" policy at the border, more than 2,000 children have been taken from their families and placed in detention centers. Calls to end the cruel practice have focused mainly on the (should be) obvious inhumanity of breaking up families and on the sparse facilities where children are being detained — from giant warehouses complete with cages to cot-filled former Walmarts.

But in many ways, the negative long-term psychological, emotional and physical effects of being separated from parents at a young age on children are even worse than the temporary trauma of their surroundings.

Toxic stress is the well-documented phenomenon that happens when children are exposed to on-going adverse experiences in their environments. The daily trauma of situations like living amidst domestic violence, on-going abuse or neglect, having a close relative incarcerated or being torn from your parents and placed in a detention facility with strangers can all contribute to toxic stress, which is associated with lifetime negative health outcomes, including risky health behaviors, chronic health conditions, low life potential, and early death.

The National Association of Pediatric Nurse Practitioners (NAPNAP) clearly calls out the generational trauma that can occur, as "there is evidence that toxic stress in childhood may cause 'turn on; genes that increase disease risk in affected individuals and this risk may be passed to future generations."

Related | How to Help Migrant Families Separated at the Border

Emotionally and psychologically, toxic stress wreaks havoc, especially on children under 5 who are especially vulnerable to developmental disruption. Survivors of toxic stress have increased risk of mental illness, attachment difficulty, substance abuse, and other problems. Apart from being separated from family members, the institutionalization of young children has long been recognized as fundamentally unsafe. The NAPNAP explains:

For more than a century, child development experts have underscored the negative effects that institutional living environments have on children. These are highly stressful for children and do not provide needed social-emotional support and security. Research shows that overcrowded, institutional environments heighten children's risk of physical, mental or sexual abuse. Every effort should be made to ensure children's safety while in shelter residence and minimize the time children reside in border shelter facilities.

As assistant professor of psychology at Yale Dylan Gee wrote, "Forcibly separating children from their parents at the border strips children of their strongest buffer against stress when they need it most."

These risks have led groups like the NAPNAP, the American Association of Pediatricians and the American Public Health Association to publicly condemn the violent practice. If and when Trump stops the separation policy, it will still take time for children to be reunited with their parents, and even longer to be out of an institutional setting. A report by the Texas Tribune and Reveal shows that children are already being sent to facilities "accused of serious lapses in care, including neglect and sexual and physical abuse." John Sandweg, the former head of U.S. Immigrations & Customs Enforcement, has warned that some migrant children may never be reunited with their parents. Forcible separation must end immediately; mountains of damage have already been done.