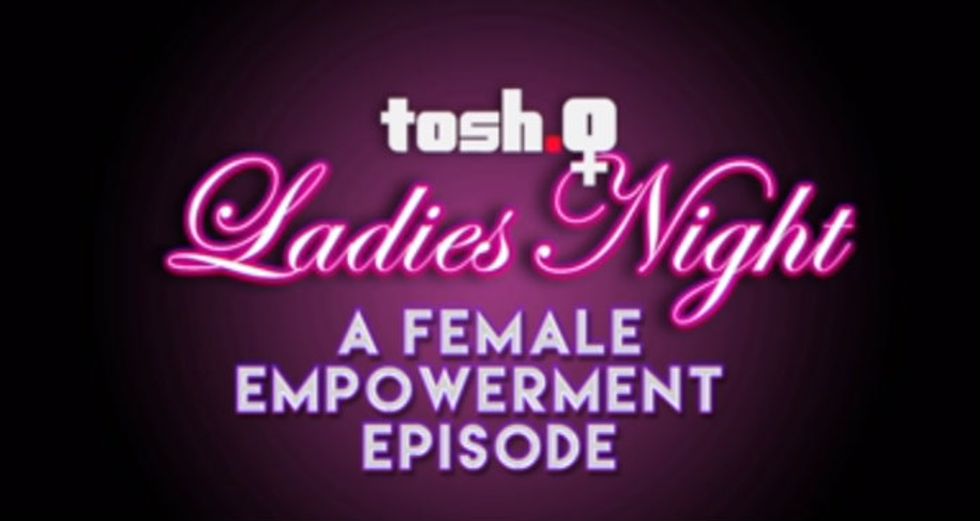 Tosh.0's "Ladies Empowerment" Episode is Like Magic Mike Without the Magic (and a lot of Sexism)

PAPERMAG
We all know that Tosh.0 is garbage. You will know this if you are a regular reader of this website, have even a glimmering of political awareness re: various systems of institutional oppression, and/or do not have the comedic sensibility of a six-year-old. But the show did something even more horrifying yesterday: a "Female Empowerment Episode," during which the show (still hosted solely by Tosh) would, in theory, make up for years of lazy and bad jokes about women.
Here is what happens during the episode: Daniel Tosh says the word "Yasss" with an ironic lilt, because it's funny when people care about things in ways that are coded as feminine. He repeatedly proclaims that, yes, women are funny, bestowing upon them the moral legitimacy they have lacked in the comedy world since the great Tosh Proclamation That Women Aren't Funny of 1802. Occasionally, Siri pipes up in the background (is this a bit of product placement?) to read facts about things women did historically -- you know, because it's like, vaguely surprising that they have contributed to humanity.
The worst part by far is a "Web Redemption" for a boy who tried stripping at his prom. (For those of you who have never accidentally watched parts of Tosh.0 while waiting for an episode of Key & Peele, Drunk History, or a cable airing of My Cousin Vinny, this is a segment in which Tosh finds someone who has been ostensibly humiliated online and gives them the opportunity to "redeem" themselves while he makes jokes about it.)
<br/></div><div><br/></div><div>In this scene (which almost made me tear up with joy in the theater), Richie is willing to genuinely put himself out there -- he's putting everything he has into making this woman happy, and the scene has stakes precisely because if he fails, it will hurt his feelings. It certainly helps that every other character is also deeply invested in his success, banging on the windows of the store for encouragement. They're totally, 100% present, and no, it's not just because they're all rolling face.</div><div><br/></div><div>Tosh has no apparent feelings to hurt. The problem with the "Ladies' Empowerment Episode" isn't even that the show does a bad job of trying to pretend to celebrate women, it's that it hoards all authority for itself and assumes that the empty gesture is equivalent to even beginning to address the rot at the center of the show. It's less that <i>Tosh.0</i> hates women and more that it hates everyone -- and itself.</div></div></div></div>
You May Also Like
Black Lives Matter