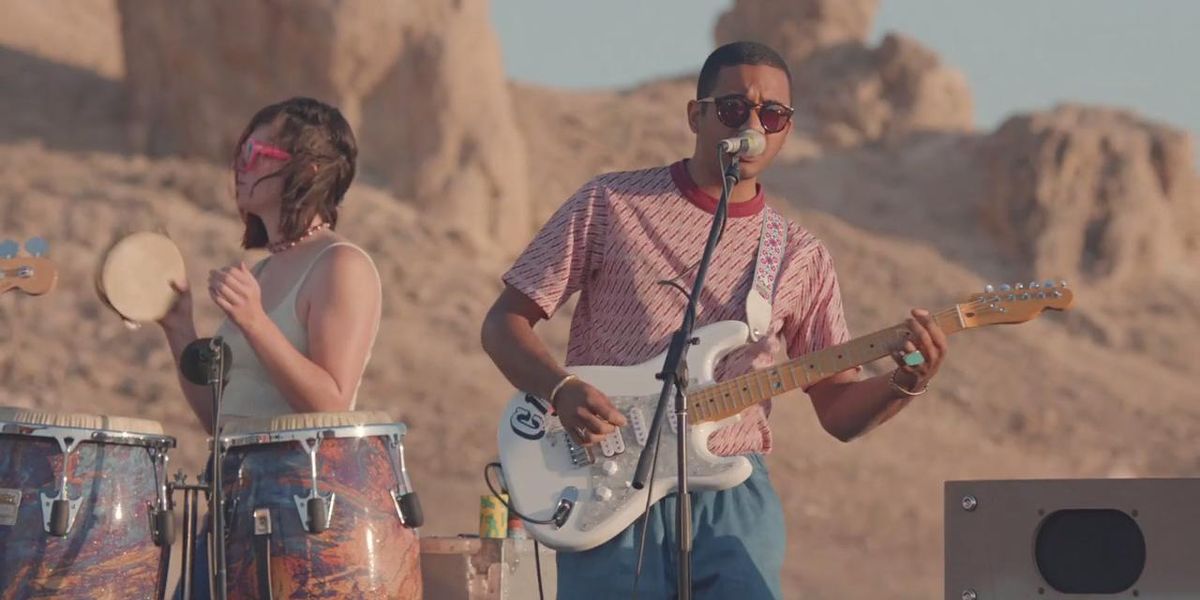 You may have listened to Toro Y Moi's "Live From Trona" which debuted early last month and includes the remastering of some of the band's older songs including, "Say That", "Still Sound" and "Grown Up Calls". But there is something visceral about the live album film, which oscillates between being a visual masterpiece and a chillwave lullaby. Chaz Bundick's vocals and laid-back sound, coupled with pink pastel animations and the loneliness of expansive desert is an interesting, yet surprisingly apt reflection of Toro's whismical, tender tunes. "Live from Trona" the musical and visual version of Chamomile tea; soothing, sweet, and good for the soul.

Shot amidst the Trona pinnacles of California, the initial feel of the live album is reminiscent of a cleaner, quieter Coachella. With no audience and no fourth wall, "Live From Trona" reveals a raw, revised version of some of Toro y Moi's best songs. We sat down with Chaz to talk more about the film.


We're seeing this peak in visual albums lately and have seen a decline in live albums, why choose to create the latter?

Visuals are a big part of music I feel like it's other half of the experience. When you listen to a new song and you're at the beach, that song is always going to kind of remind you of the beach, you know? I wanted a different approach to the experience. I've always admired musicianship and I think that's the goal with live performance videos, so that you can watch musicians and see where the fills are. It's for the hardcore music nerd, really. I've always tried to balance making stuff that's for musicians and for people that just love music.

How much artistic input did you have in the creation process?

Pretty much [director Harry Israelson] and I were in control of the artistic direction of the whole film. This included everything from the colors of the umbrellas that you see in the drone shot, to the colors of the people's clothing, the font of the logo, all that we picked ourselves. That kind of stuff is really important — I think it's the smaller things that make a bigger, cohesive project. It was amazing to finally get to do that kind of thing.

There was this kind of forced intimacy between the viewer and the film, especially in the juxtaposition between the close up shots and the aerial ones that remind you of the desolate landscape. Why choose to have no audience?

The main reference of the film was Pompeii by Pink Floyd and they performed in an arena around no one with just the film crew. It was this really epic thing shot on 16 millimeter and it was beautiful. Also, going back to why we tried to pursue that approach was because personally it shows that we're in it for the music. We're not trying to please people. First we want to make sure we're happy doing what we're doing. We're having fun just playing by ourselves, essentially just having a band practice in the desert. It was really great for us. We got to keep that audio and press it to Vinyl and then extend the experience to other people. Personally, I thought it was one of those moments where you realize, "wow this is crazy my music is taking me here, to the middle of nowhere, with these really nice cameras and these beautiful colors". I consider the connection of the desert being pretty isolating to music, [which is similar] because it puts you in your head.

You mentioned it felt like just a band practice but can you walk me through the filmmaking process that day? Was there less pressure due to the absence of people?

There still was pressure because we were racing the sun. We had one or two tries at each song but for the most song we went straight through the entire set. Once the crew was ready to film, we started at 4:00PM and just started going. By the time the sun was setting we took a good hour break for it to completely set and [then we shot] the night time stuff. It was so fast I can barely remember. It was one day and it seriously took 20 other people 10 hours to do their thing. I'm glad we filmed it because I don't really remember it.

You've worked with Harry before both under Les Sins and for multiple Vimeo award-winning music videos of Toro Y Moi. How was it working with him again?

Harry has become one of my best friends since we started working together. He's kind of my go-to visual guy and he's pretty much part of the team. Working with him, he's like my Virgil Abloh. He's always like, "check out these colors" or "check out these themes". He's constantly texting me YouTube links. Our relationship is really cool and collaborative. His mind is constantly going.

How do you feel your sound or your group's dynamic has developed from your earlier work and original EPs to 'Live From Trona'?

It's one of those things we went into together. I don't know how to explain it besides to get technical with it but all of us are splitting the album sales. It's our baby, it's the band's baby not just [mine]. That in a way is a big testament to our growth. I'm glad we could do something together and split it equally and make it ours and still have it be under Toro. It's funny because it's not until you're older that you find out the Beatles we're really just two guys writing most of the stuff. For this to be a full collaborative band things is really nice.

The limited edition pink vinyl double LP is available for purchase November 4th. You can rent or purchase "Live From Trona" via Vimeo.