From beach-ready styles at Chanel and Michael Kors to experimental accessories by Erika Cavallini and Y/Project's Glenn Martens, these are the bags that caught our eye during spring 2019 fashion month. See more of our favorite styles from the season, below. 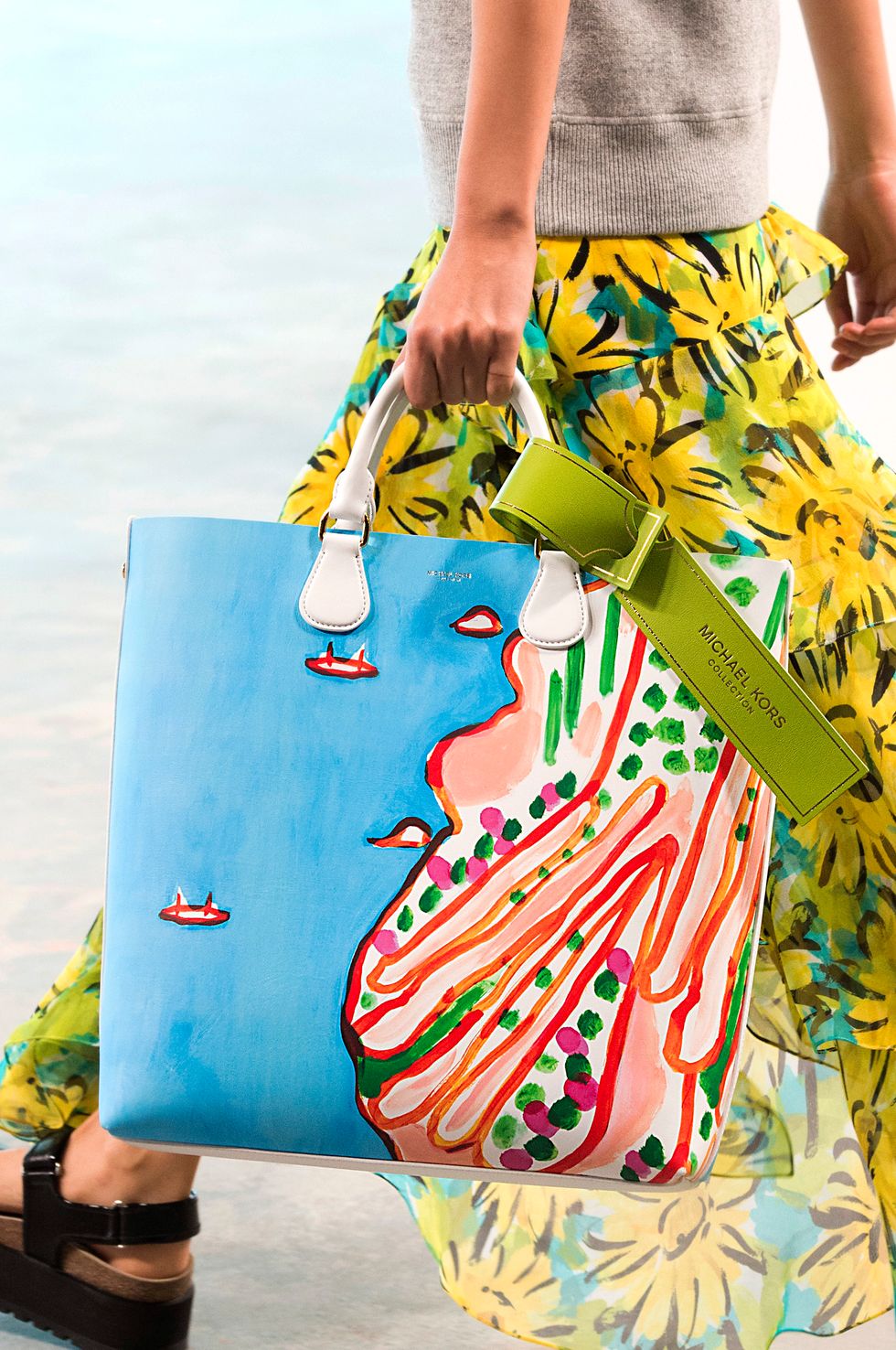 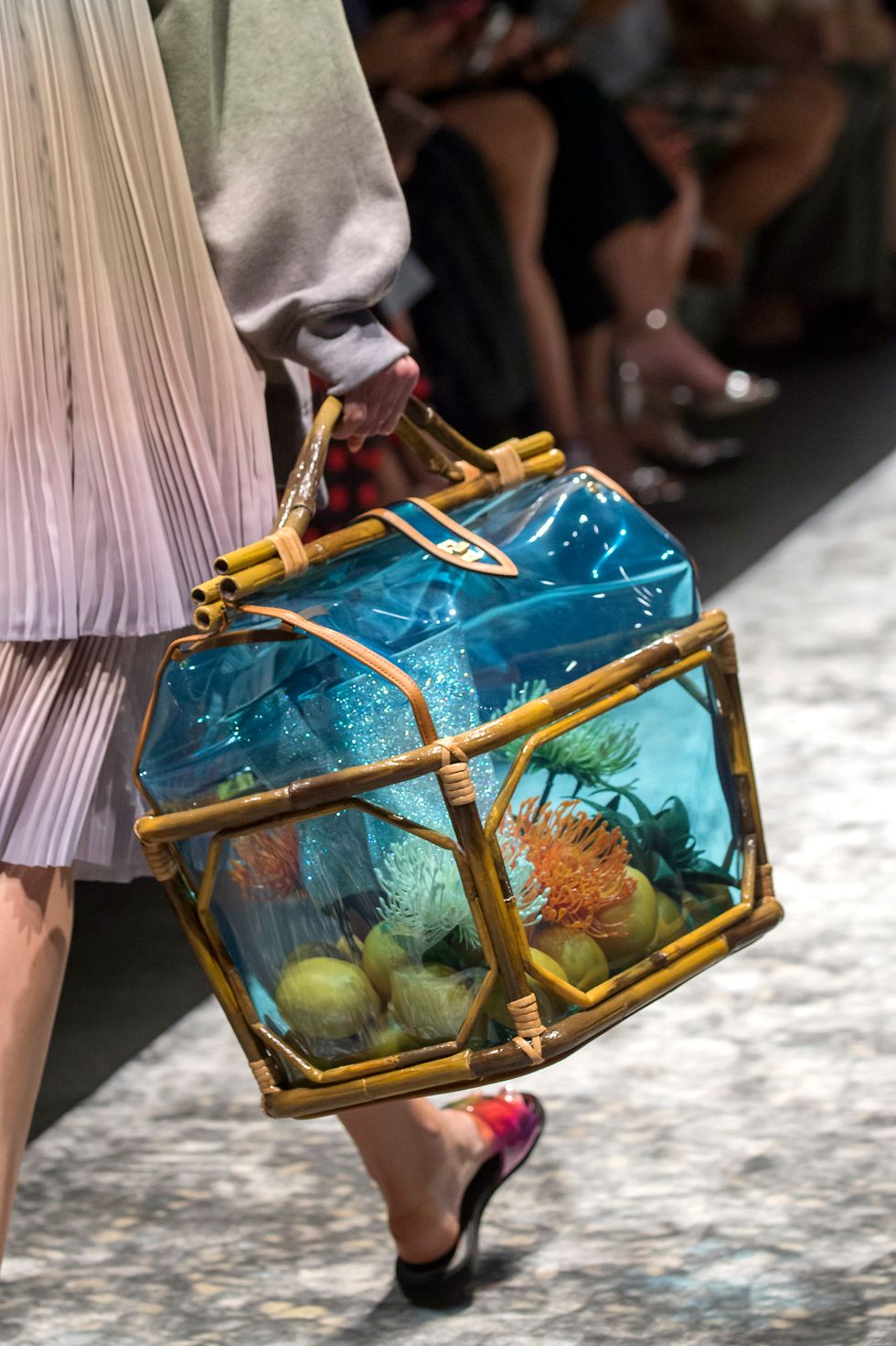 Marco de Vincenzo has been looking back on his Sicilian upbringing for the past three seasons. For spring 2019, the designer was inspired by his aunt Santina, a Californian whose mannerism, curiosity, and wardrobe perplexed locals when she visited in the southern Italian state in the 1980s. Her "trashy taste" as de Vincenzo described it, reflected in a fabulously garish, bamboo and PVC carryall filled with lemons and flowers. 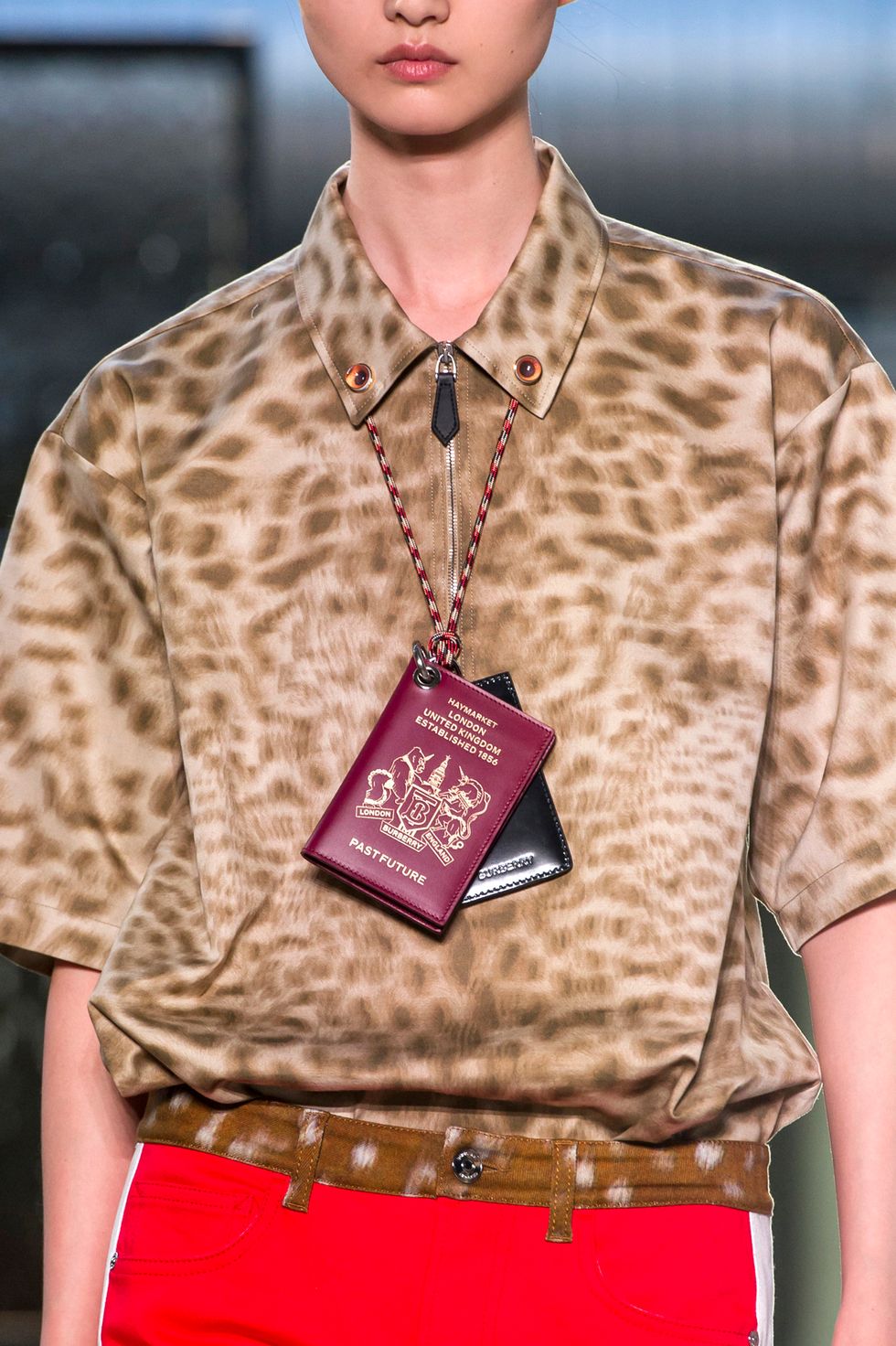 In his debut collection at Burberry, titled "Kingdom," Riccardo Tisci made a subtle political statement with accessories. A maroon billfold wallet that resembles the U.K. passport was attached to a lanyard and worn as a necklace. Now that the U.K. has left the European Union, its passports have turned navy. The incisive touch made the Italian designer's stance on Brexit crystal clear. 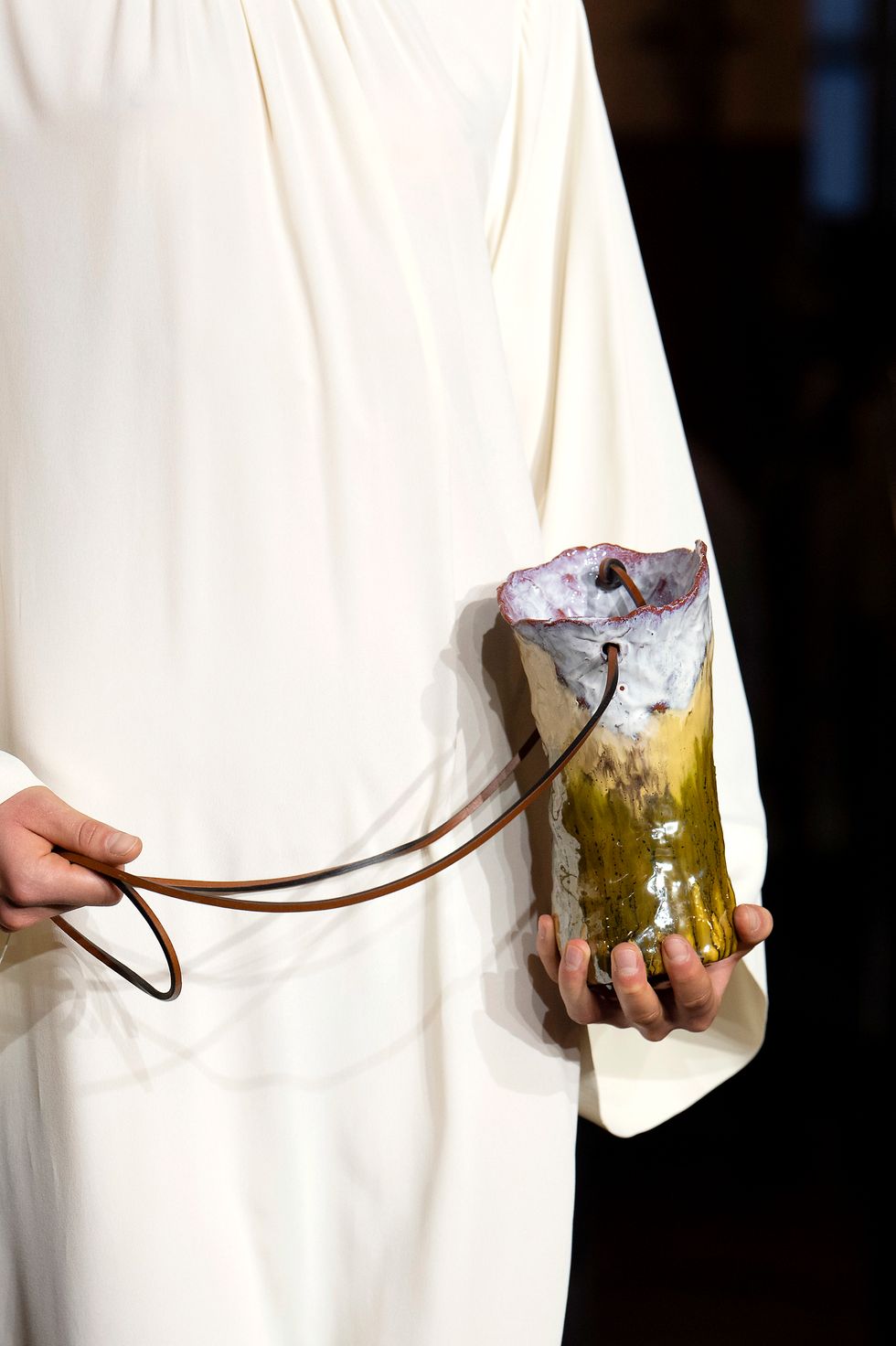 Milan-based designer Erika Cavallini took a sculptural approach to her bags this season, quite literally. Hand-formed, raku-fired vessels in rust, ocher, moss green were attached to leather straps and styled as cross-bodies and belt-bags. A limited series of these porcelain pieces, signed by Cavallini, are currently available at the designer's Via della Spiga boutique. ​ 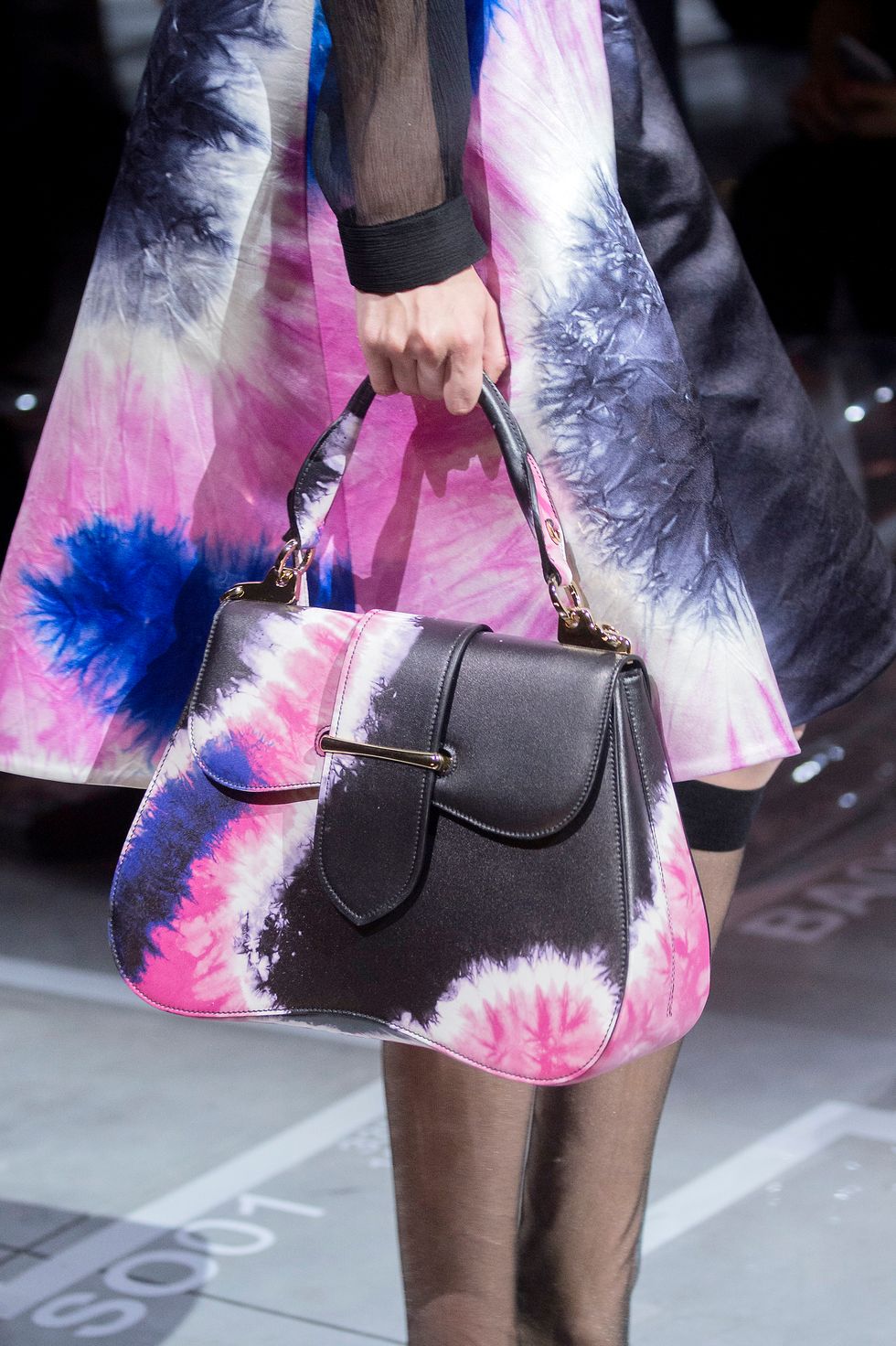 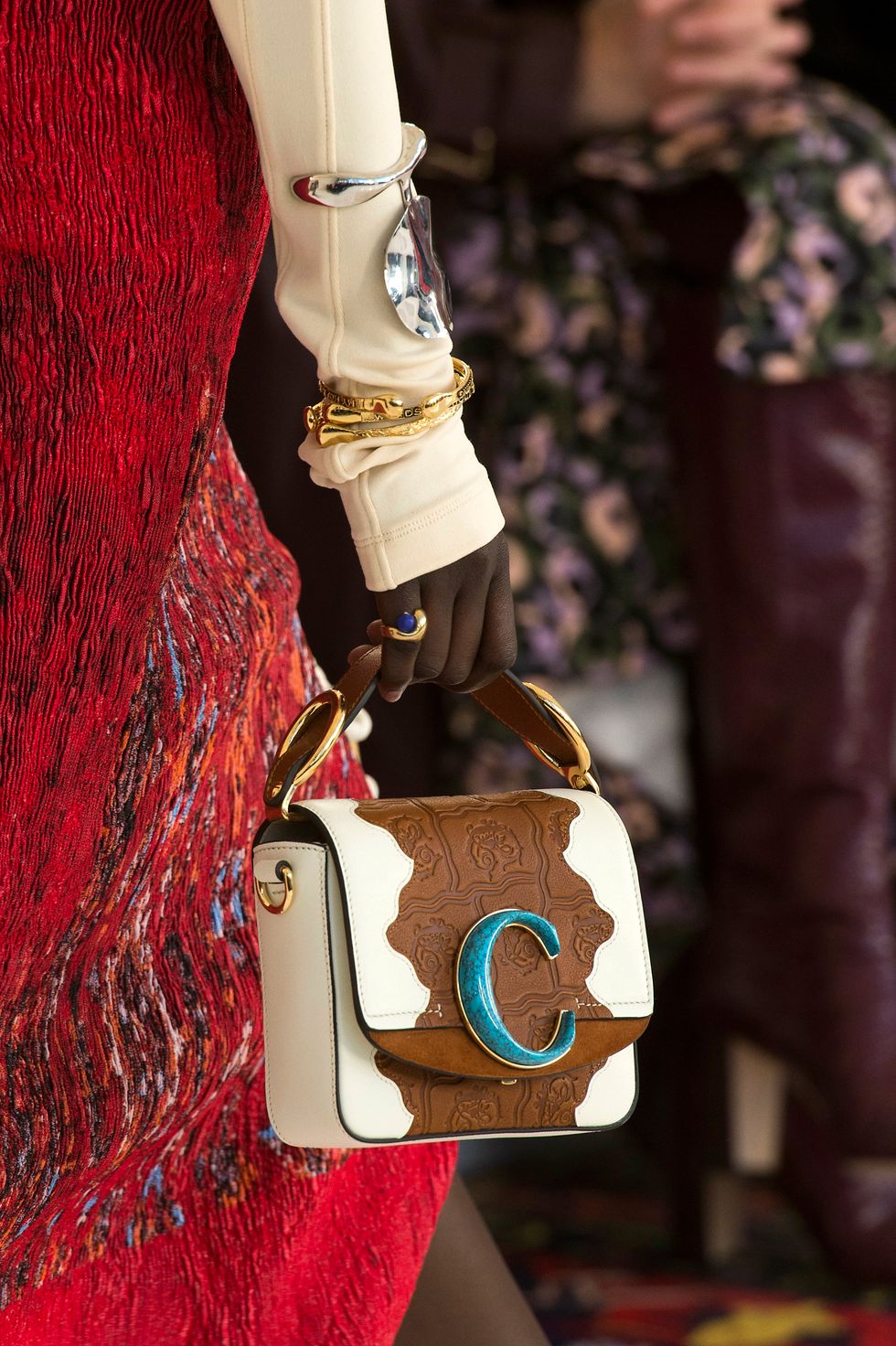 Natacha Ramsay-Levi introduced a new range of accessories — rather work-ready for a collection rooted in fluid Grecian dressing — at Chloé's spring 2019 show. On this bag, punctuated by calligraphic C's, a turquoise stone carved into the house's first initial pops against crisp white and rich chocolate leather. 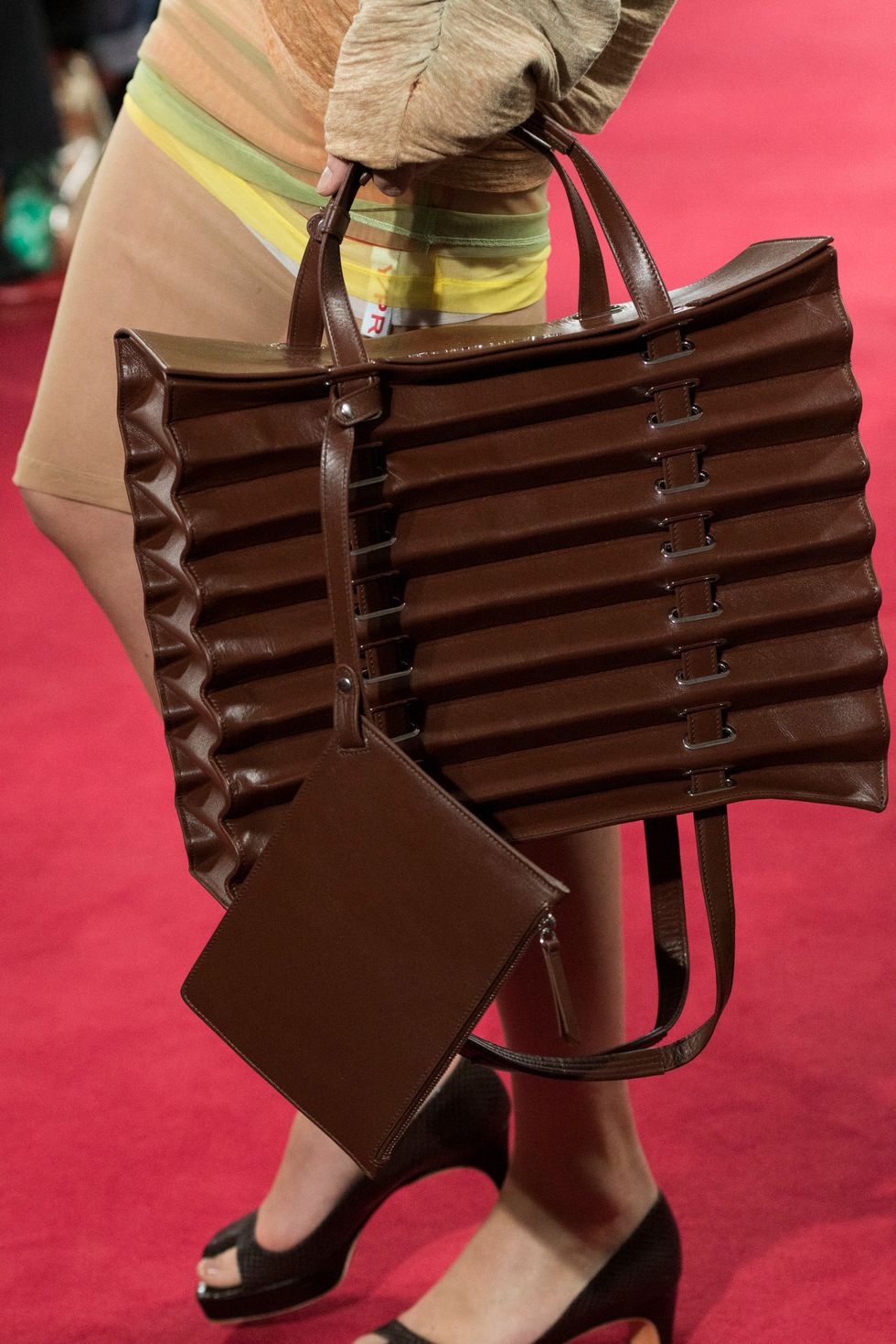 Glenn Martins, the Dutch designer at the helm of the Parisian label Y/Project, presented rectangular accordion pleated bags alongside one of his most versatile collections to date (there was everything from an emerald green silk evening gown to drawstring sweat pants and acid wash denim jackets). With adjustable straps and a detachable wallet, the geometric style touches on Martens's desire to create an adaptable, diverse collection. 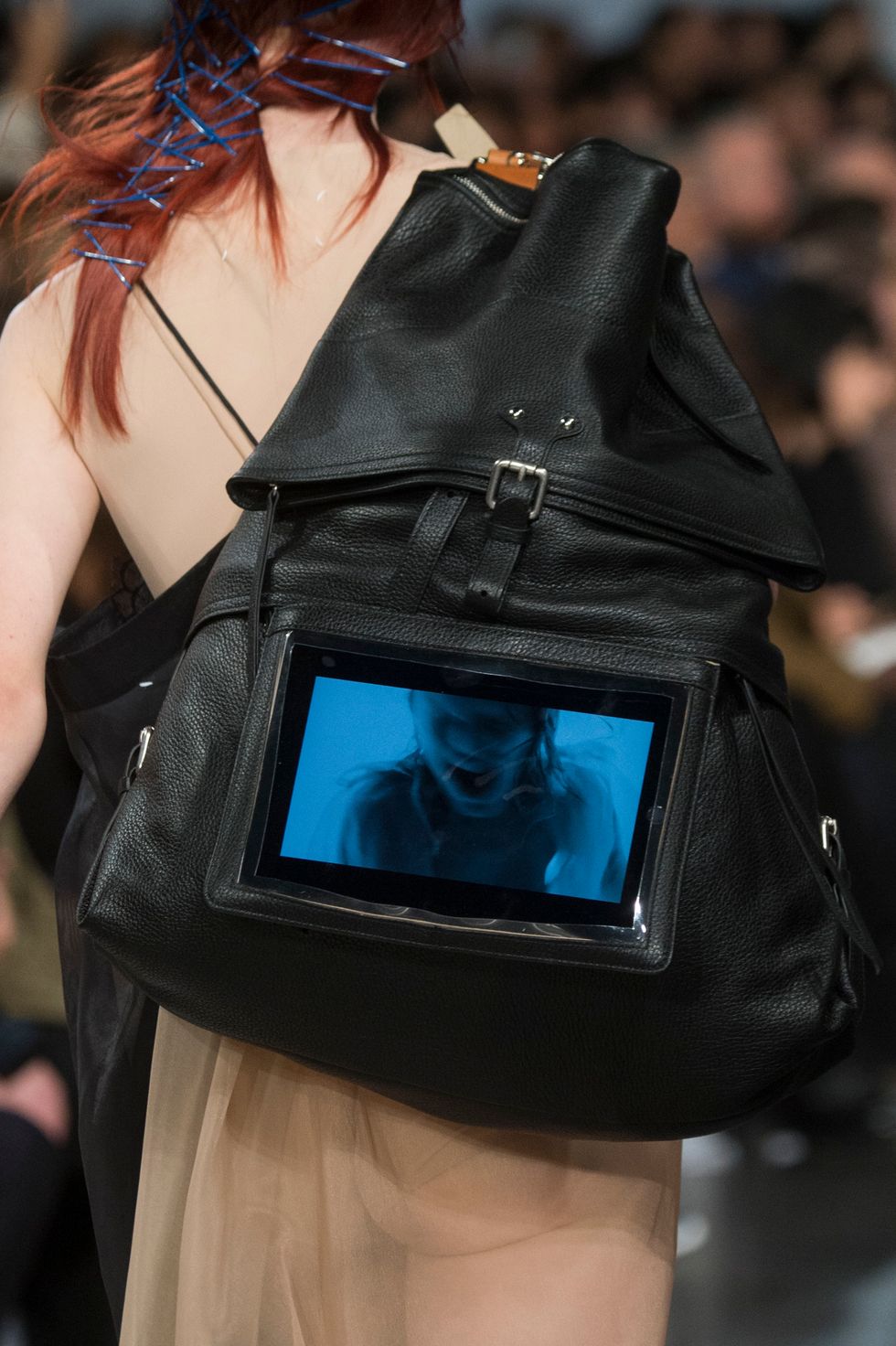 John Galliano's reflection on identity in a tech-obsessed world has carried forward from his fall 2018 haute couture collection. At Maison Margiela's spring 2019 show, iPads peering through clear plastic pockets on backpacks, played scenes from the short film for "Mutiny," the house's first fragrance under the designer's reign. 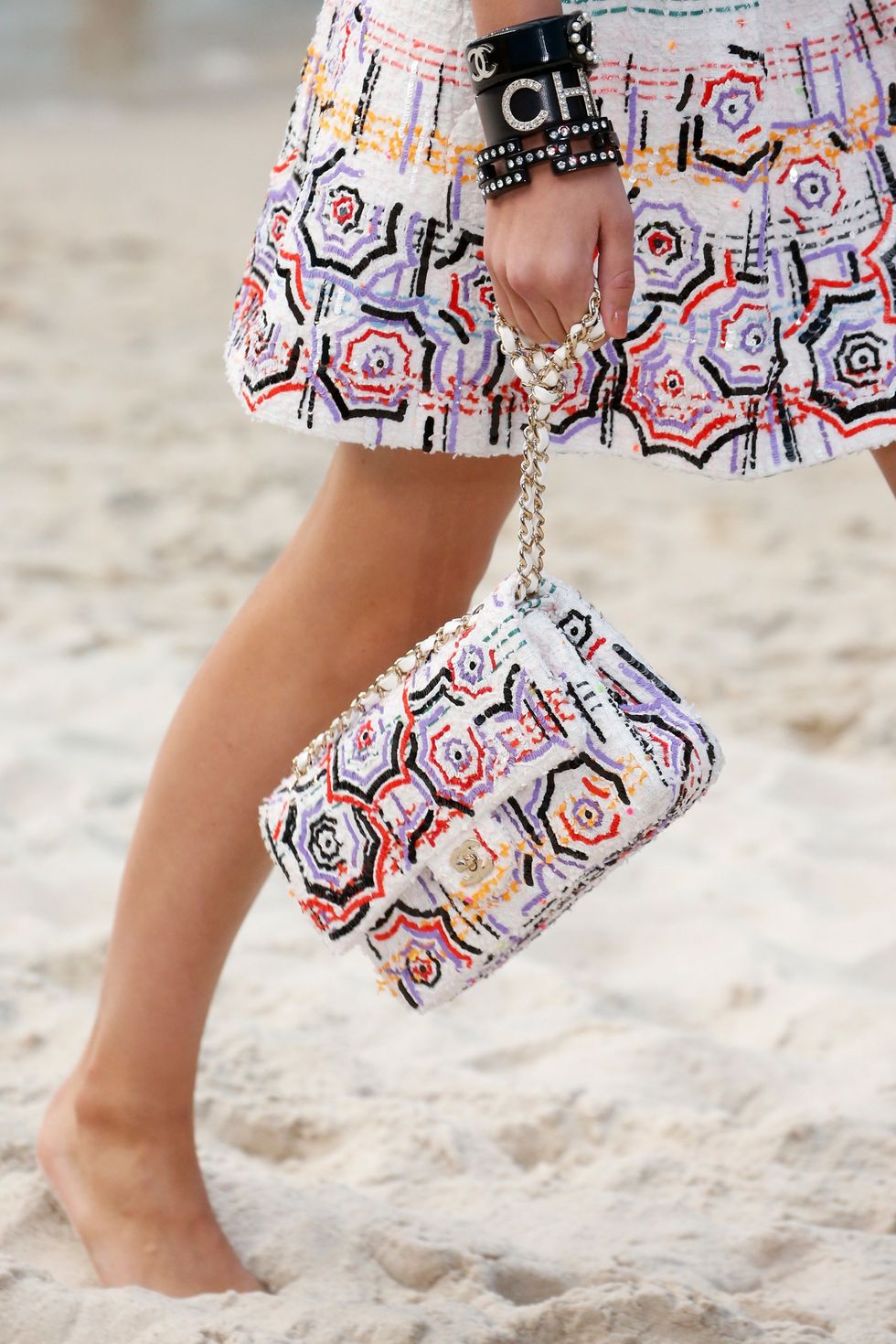 Karl Lagerfeld's beach-themed Chanel collection — shown on a set complete with rippling waves, a sandy shore, and a functioning bamboo hut — was full of subtle, coastal motifs. Here, the house's iconic flap bag is reinterpreted in white bouclé tweed and covered in embroidery at resembles a bird's-eye view of colorful umbrellas. 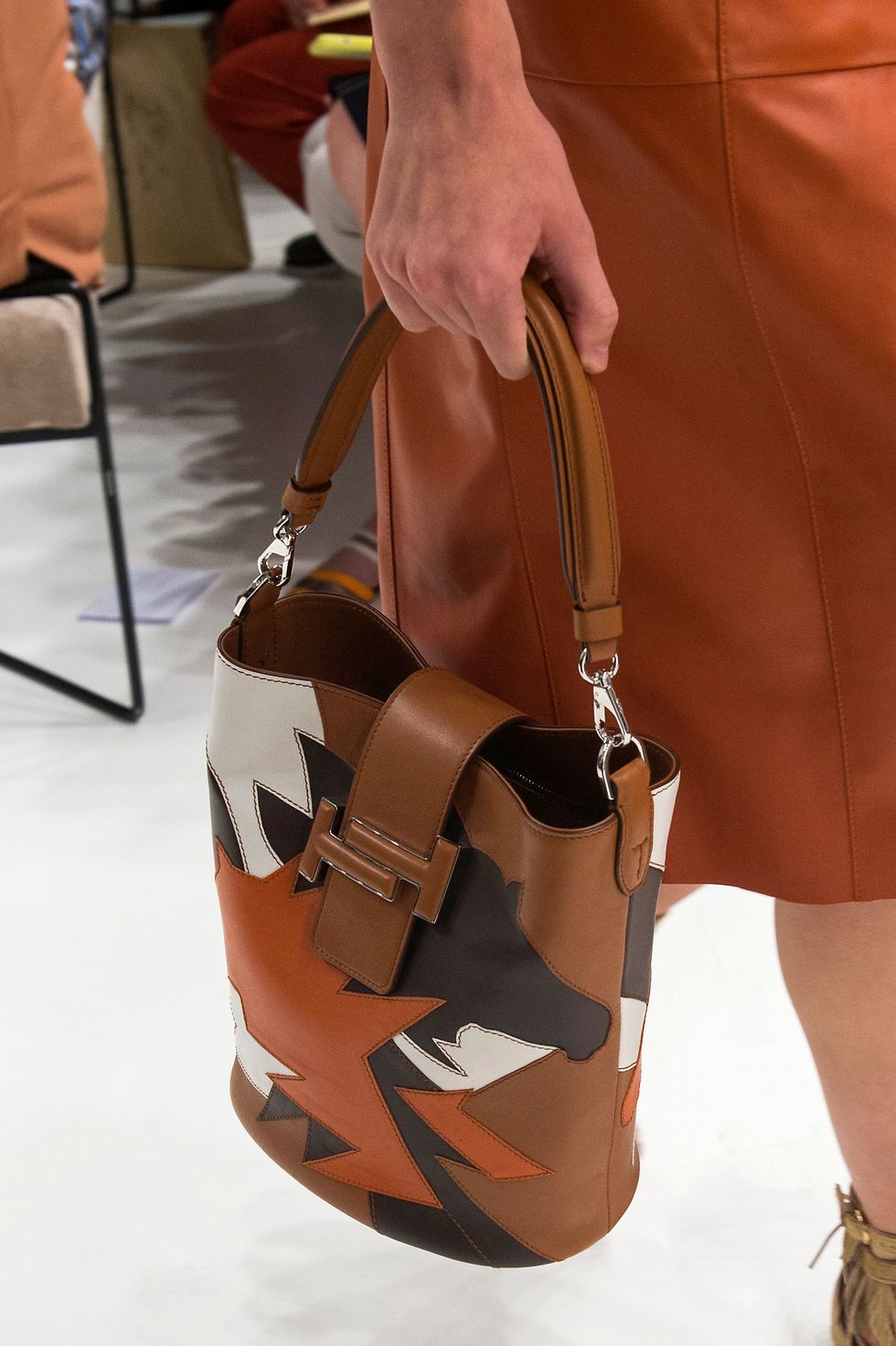 At Tod's — one of the few fashion houses that operates without a creative director — the design team gave the classic bucket bag an equestrian bent. Rich leather cutouts in egg shell, caramel, and chocolate brown were stitched together to create the profile of a running horse.