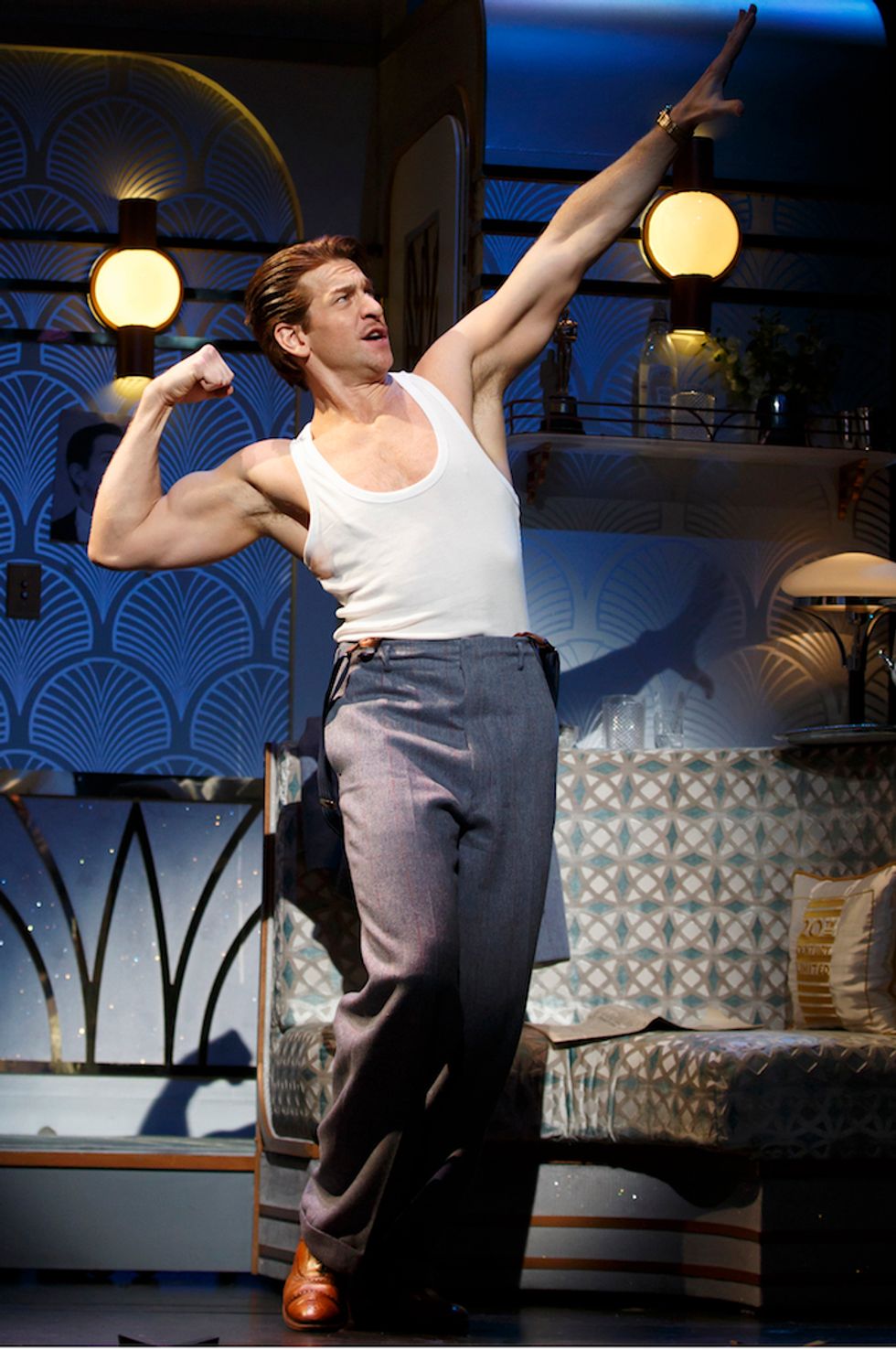 by Mickey Boardman
PAPERMAG
Photo by Joan Marcus
The current Broadway revival of On The Twentieth Century is a side-splitting smash that has theater addicts lined up around the block. The entire cast is stellar and includes Peter Gallagher, Kristin Chenoweth and Mary Louise Wilson but Andy Karl who plays Chenoweth's muscle-bound movie star boyfriend Bruce Granit more than holds his own with those heavy hitters. We caught up with Karl, who was nominated for a Tony Award for Best Featured Actor to see how it feels to be one of the sexiest men on Broadway.

Had you ever seen the musical On the Twentieth Century before starring in it?

Well, in the 2005 Actors Fund performance of On The Twentieth Century I actually made a cameo as one of the luggage toting and singing "Porters" with THE ALTAR BOYZ (the Boy Band group from off-Broadway). It was myself, Cheyenne Jackson, Tyler Maynard and David Josephsberg singing the showstopper, "Life Is Like A Train."  We did not tap-dance but the audience loved our performance. I think you can check it out on Youtube. I admit I knew nothing about the show then and we were taught the number separately from the rest of the performers.  When it was showtime, we were escorted in to the theater to do our number and escorted out directly after. I was never able to watch the show and until now still knew nothing about it accept my little blip in its history.

Your work with Kristin is so amazing. Did it take tons of rehearsal to get everything just right? Or is there any spontaneous tomfoolery with you and Kristin (as opposed to it all being precisely choreographed)?

A little of both actually.  What's great about meeting and working with Kristin is that we quickly found we have a similar sense of humor and goofiness that allows us to go for just about anything for a chuckle, but we also share a need to make things work in the right way. So we would discuss and plan what would be funny, then try it out, then let it go bananas until even funnier things were discovered and it became perfectly imperfect. What's easy is that she's so tiny I can pretty much throw her around and lift her like dumbbells in the gym if there's any physical madness. What's tricky is that I don't break her on stage. She's the yin to my yang.â�¨

You might be the only HUNK on Broadway. What types of fans wait for your autograph after the show?

Fans? I have fans? Where? They all want Kristin's autograph. So do I. And as far as HUNK's go, there are plenty on Broadway.  But, who's got two thumbs and works with Kristen Chenoweth?...This guy. Jealous?

â�¨After playing Rocky and now this role do you feel type cast as a muscle man?

Excuse me, I think you forgot my turn as the UPS guy in Legally Blonde.â�¨ Whatever gets me the job, man. But seriously, I spent many months during Rocky learning how to properly become "in good shape" and push past my own expectations. And (I believe) going beyond your expectations is what Rocky really was all about at the show's core. I can apply that same notion to going deeper as an actor or doing funnier gags on stage and never saying, "I can't do it."  If I am type cast as a muscle man, the directors better expect I'm coming in with a lot more to say and offer then flexing a little. With that said, "Bruce Granit" was never written as a musclebound fool, he's self-centered and vain, flexing the biceps just makes that more apparent and way funnier.

Your scenes are so funny. Do you ever have a problem not laughing during them?

If it's me doing the funny in the scene I'm pretty unshakable.  As soon as the other cast members start to do something new and funnier and different, I bite my lip a little. What gets me the most is when things go wrong and we have to ad lib our way out of it. There's been a few "grape" issues between me and Kristin and Mary Louise Wilson loves to get a little "nuts" sometimes and throw us all for a loop.â�¨
You May Also Like
Music