I have been on a great tour with Junkie XL for the past month and haven't had a ton of time between remixing tracks and working on vocals for a handful of artists around the world during the time I am actually home. However, I had always said that I would never go to Coachella unless I was playing it. This year I broke my word on that as I had been invited to play at a few day parties and figured it would be nice to go hang in the desert while the weather in New York was still shit. I am not exactly sure what I expected but what I got was quite different than I could have ever dreamt of.

Daniela and I arrived on Thursday night late and had a chance to rest a bit and enjoy a night that was both warm and devoid of humidity, much unlike New York at any time of year. Now you see, I have a love/hate relationship with California in general so going there is a process every time. I love the weather there and I like the terrain but the stoned/K-Hole attitude of most everyone who lives there grates on my nerves. I will take the hard working East Coast attitude (from those who actually do) anytime, but I digress. I played a party for BPM that had a Smurf theme on Friday afternoon and it seemed that most of the people hadn't arrived yet so the attendance was slight. I had a great interview with Imeem and got a great Smurf blue hoodie and Daniela grabbed a great '70s bikini from 55DSL before I played a noisy set with a mountain behind me on a very hot day. After all that we grabbed a few things from Trader Joes and went home in time to sneak in a quick skinny dip in the pool before our housemates got home. Fuck yeah!

Saturday was the Anthem party and it was approximately the hotel sequence from the Tom Hanks classic, Bachelor Party. I wore a robe that everyone thought was either classic Indian or simply a Jesus robe and of course, it was neither. I bought it from a hotel in Tulum, Mexico that my friend Jon got married at. My set time was great; 3:30-4:30 p.m. right in between Spencer Product, who dropped some tracks from his upcoming solo album, and the Ed Banger all-stars who arrived at 5:45 making my set time grow from one hour to two hours, 15 minutes. I played my usual Armageddon Fidget Rave for about an hour until the diving contest judged by Tim Harrington of Les Savy Fav (who announced me as "Jesus Lebowski") and then trolled through another set of Hendrix, Bjork, Jamie Lidell and Mountain's "Mississippi Queen" before rolling back into full on dance music and then handing it over to Xavier from Justice and So Me, art director for Ed Banger, and for music videos by Kanye West and Justice. I feel like kindred spirits with the French Invasion but I must ask the question, why on Earth were they dressed in seersucker on a 105 degree day? Of course they closed Coachella after Roger Waters on Sunday so who the hell am I to even ask such a question? They played an insane mix of Manfred Mann's Earth Band and Puff Daddy tracks and again, when you rule the world you can play anything you fucking want to.

We had to split with our friend Austin Brown (who runs things at Etines) to the festival as we wanted to catch the trifecta of Kraftwerk, Portishead and Prince. We arrived on the grounds to the opening sounds of Kraftwerk and were able to watch the show in the company of Sioux Z from Magnum PR and Mark Jones who owns Wall Of Sound Records in the UK. Sadly, the message that Kraftwerk sends out is lost on 2008 America, even as it is more relevant than 30 years years ago when the songs were actually written. This country has become the robots that they predicted so many years ago and their striking performance was lost entirely on a crowd waiting for something more action packed to take place. They were certainly let down when the musical quaalude named Portishead took the
stage and took Kraftwerk's cold take on life in the modern age into the bowels of hell by way of bad relationships and love undone. Their music is perfect in a smokey club but in front of 70,000 people on a hot night, it was much like a hit of Ecstasy with too much Junk in it.

Daniela and I enjoyed the VIP tent and ran into tons of people who were there. Highlights and fun conversation with Beth Gibbons wailing as the backdrop; Justin, who does the Nick Jr. show Yo Gabba Gabba and Junkie XL as well as sightings of Mark and Sam Ronson, Chloe Sevigny, Serj Tankian and Tony and Adrian from No Doubt. Of course we were all dying to see Prince and it was time to secure our spot on the green. As the anticipation built we ran into Dana Dynamite from Ben Sherman and spoke of the impending brilliance with anecdotes of Prince gigs past and set lists from the glory days of his royal badness. It was time; Morris Day and The Time took the stage and did "The Bird" and "Jungle Love" only to make way for Sheila E. and "Glamorous Life" and the only thing I kept thinking is, "Where the fuck is Prince and why are all these other people singing his songs?" At the end of this medley, Prince took center stage and launched into a wanky, self-indulgent "jam" that went on about eight minutes longer than it
should have, mind you he hadn't sang one note yet. "1999" was the first song he actually sang, 2- minutes into the show and "Controversy/Housequake" was the surprise of the set. Then he went into a "Lite FM" interpretation of "Little Red Corvette" and made one of my favorite songs of his sound like a cover band was mauling it. "Musicology" made me realize how much he has really lost his mojo and
the rest sounded even worse. By the time he sang Radiohead's "Creep," his back-up singer sang "Arms Of An Angel" by Sarah McLachlan and then he made John Lennon puke in his grave by playing "Come Together" in the middle of "7," I realized something. THIS WAS HIS LAS VEGAS REVIEW AND HE WAS TORTURING 70,000 people who were ready to be kicked in the ass by Prince and instead had our ears raped by his half-assed versions of the songs we grew up to, lost our virginity and minds to
and loved. He had the remaining crowd chant "No War" but it was so limp that the message never got any traction. By the time he played "Purple Rain" and "Let's Go Crazy" he was out of gas and most of the crowd had lost all interest. Now he can still play guitar and there were flashing moments of greatness but they were crushed by his editing of his lyrics for God and the idea of "taking us to church" by doing a review of his past glory while telling us that the glory of God is the way. Thanks Prince for mixing God with Funk. Did the President get to him to? I felt the show leaving dirty, not in the way I expected to and was embarrassed for him when all was said and done. I am sure he spent all 4.8 million he was paid for the gig on praising the Lord and not on the excess of life as a nut job. Needless to say I was scarred by the whole thing and that night was spent trying to sort out my awful feelings about it.

The next day we returned to the Anthem party for Surkin, Boys Noize and Claude Von Stroke who were all awesome and so was the party. This was so much fun we forgot about the traitor who shit on Radiohead the night before and decided that instead of going back to the scene of the crime, Daniela and I had a great dinner with Austin, his friend who does publicity for Burton and his other friend who works for Yahoo! After dinner Austin, Daniela and I went back to where we stayed at and talked until the wee-hours. No "Dark Side Of the Moon" for us as I didn't want the possibility of having another legend crap himself on stage. Our conversation was way better than it ever could have been and my trip to Coachella taught me a valuable lesson; that friends are way more important than any band and maybe this is exactly what Golden Voice, the promoters of the festival are trying to teach us. Who knows?

Just to make this story more insane, I almost forgot that Daniela and I had a layover in Denver on the way home and instead of taking the over-sold flight, opted for free tickets on United instead and took a night in the Doubletree and a flight home the next day. We spent the early evening at a Target Superstore and terrorized the Colorado folk with our insane clothes and antics and relaxed until the next day. On
that flight home I realized that "Purple Rain" really was almost 25 years ago and that there really was no way Prince would be that good in 2008. Maybe I should have cut the royalty a break but instead realized that he really did suck and that is no excuse. 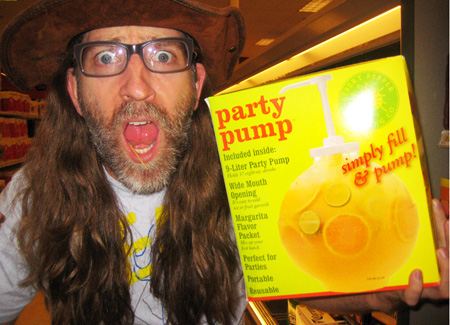 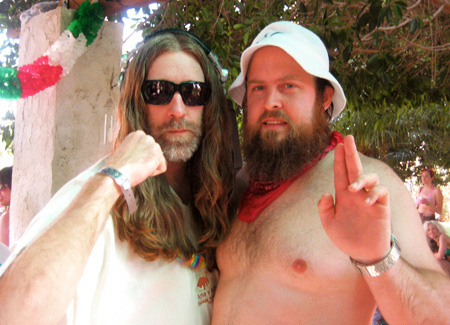 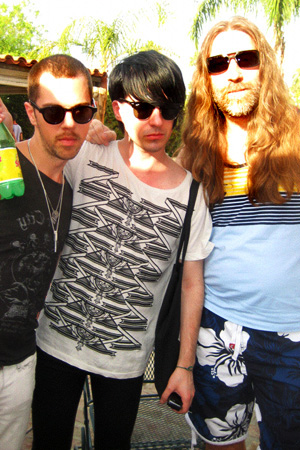 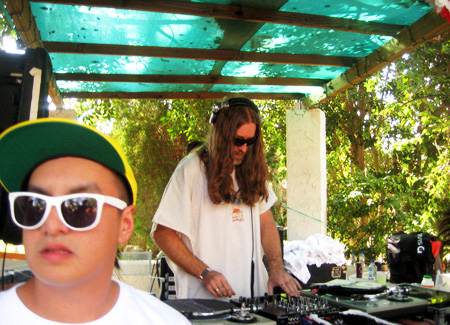 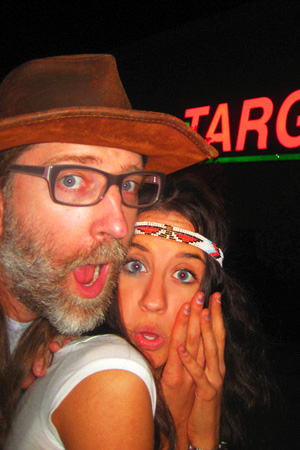 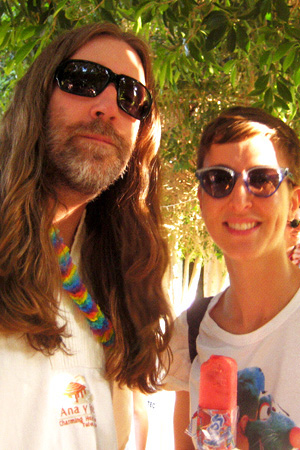 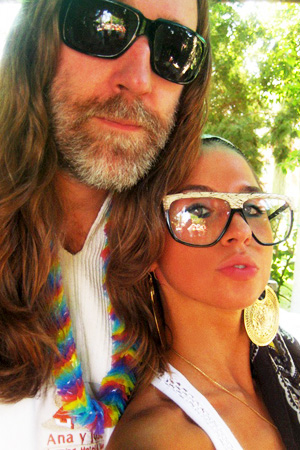 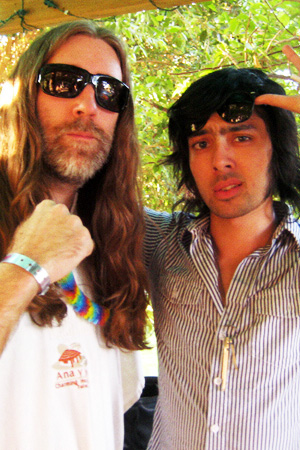 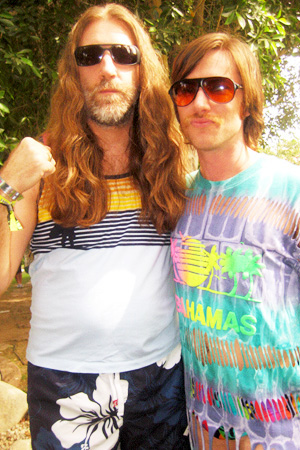