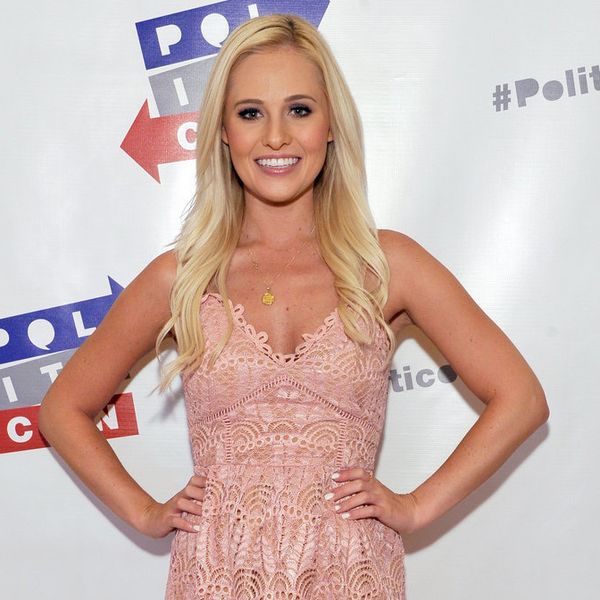 In the wake of mass shootings, the sale of products designed to prevent harm often skyrocket. Many parents buy their children bulletproof backpacks; the students at Marjory Stoneman Douglas High School have been required to carry transparent bags, so that it is harder for potential shooters to conceal weapons. Now, FOX contributor Tomi Lahren is advocating for an entirely different kind of product — one that, instead of serving as protection from a shooter, allows you to hide a gun... in your yoga pants?

Lahren recently posted about the pants on Instagram, marketing them as a tool for empowered women. She said, "Ladies, chances are your assailant is gonna be bigger, stronger and faster and that's why you have @alexoathletica for your gun, your mace, or even your phone." The brand Lahren is endorsing, Alexo, markets itself as them "first active carrywear line helping women stay safe and stylish." Their tagline is "Carry With Confidence."

Yes, women certainly need to defend themselves from unwanted advances and domestic violence. But, coming just days after the March For Our Lives, which was organized by high school students — many of them women — advocating for gun control after 17 of their peers were killed by an armed shooter, Lahren's endoresment feels deeply insensitive and ill-timed.

Lahren has a well-documented history of calling The Women's March a "vulgar display of hate and bitterness," criticizing Black Lives Matter protestors as "militant and overtly aggressive," and supporting rigid gender roles. Given this reputation, evoking women's rights here feels more like a manipulative ploy to sell $99 exercise pants than a radical political intervention that would help all women and femmes defend themselves.

And, as Jezebel writes, exposure to guns does not always make women safer, as it puts them at a higher risk of suicide and homicide. After Trump suggested arming teachers as a way of preventing further school shootings, critics also said that guns in public spaces like schools (or yoga studios) could endanger both students of color, who often face harsher punishment than their white peers, and teachers of color, who are more often punished for carrying guns. Similarly, a black or brown person carrying a gun to yoga is much more likely to be seen as a threat than a white person like Lahren is.

So, are these pants really a useful tool for black and brown women who want to feel safer? What about women for whom that $99 price is prohibitive? Or women who just don't want to support the NRA? Looks like we're gonna have to stick to Lulu Lemon (or... like sweatpants?) for now.