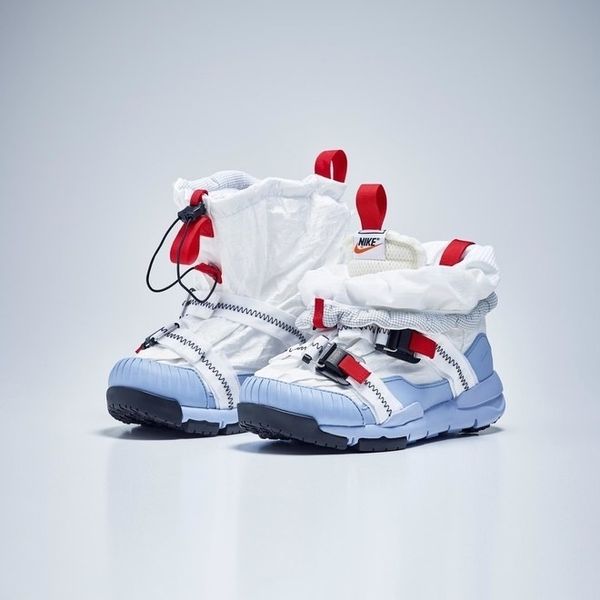 In what has quickly become the most talked about and anticipated sneakers of the fall, artist, designer, and filmmaker, Tom Sachs, is set to release his newest collaboration with Nike this Thursday, October 11th.

Having made films about going to Mars and papering his Instagram with NASA iconography, Sachs keeps with his affinity for space travel for the Mars Yard Overshoe. The tundra-ready boot, features Sachs' previous collaboration with Nike, the Mars Yard 2.0 which was initially developed for simulated Martian terrain at NASA's Jet Propulsion Lab, stitched in to a waterproof Dyneema bag that cinches with magnetic ladderlock buckles.

A cross between a moon boot and hazmat cleaners' shoes, the Mars Yard Overshoe is as much about looks as it is about functionality. Thick rubber souls and multi-layered protection make the sneaker perfect for weathering anywhere from a dirty and slushy NYC winter to "a walk of the surface of Jupiter's moon, Europa" says Sachs.

The launch of the shoes coincides with the release of Sachs' latest film, Paradox Bullets. A spiritual sequel to his previous film, Ten Bullets about rules for working in the studio, the new film will look at how break and invert those rules in order to achieve a similar outcome. Narrated by legendary documentarian, Werner Herzog, and starring iconic painter, Ed Ruscha, the film follows the narrative of a man who loses his keys in Mojave Desert while delivering an important package guided home by a set of rules called the "Paradox Bullets." "I think Ed and Werner are like my dads, like my art dads," Sachs told Vogue "My writing style, the movies that Van [Neistat] and I write together, are always kind of in Werner's voice."

Paradox Bullets was produced with the help of Nike and premiered as a part of Frieze Art Fair in London ahead the shoe's limited release later this week.