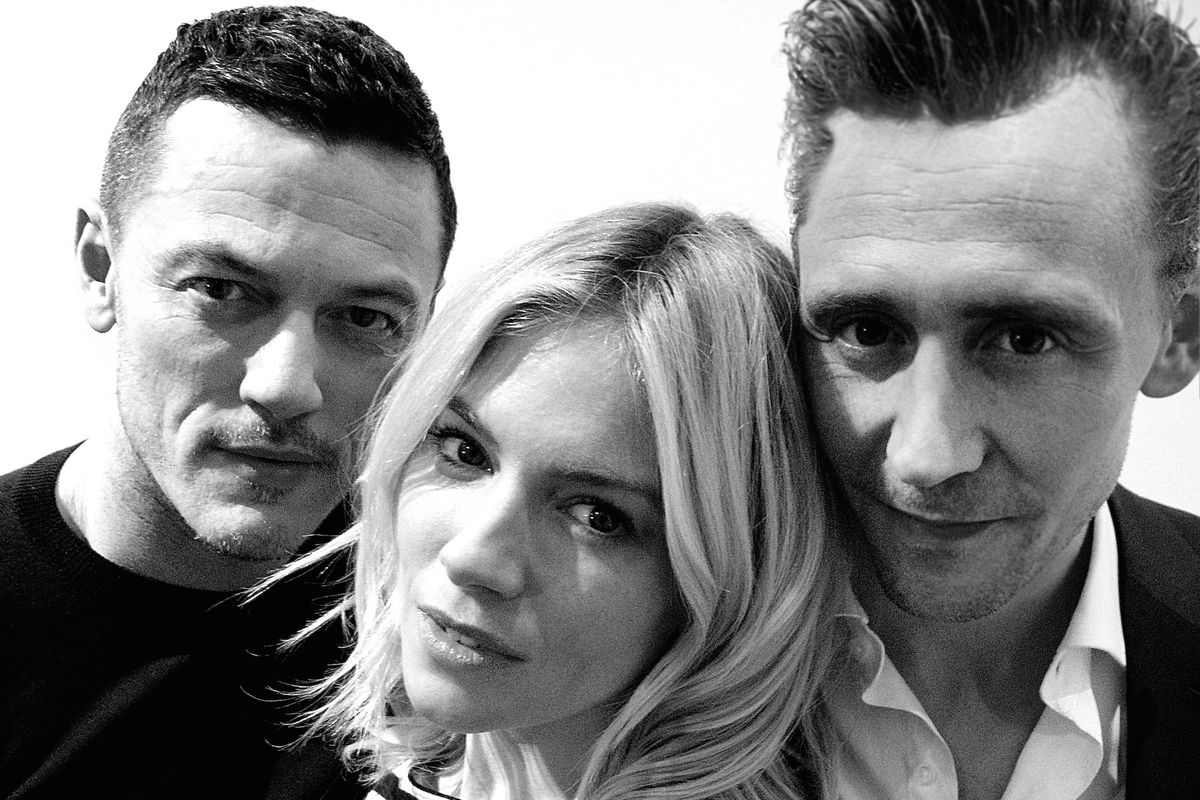 "The subject matter was chaos."

"There was no 'too far' with this film," Sienna Miller says about acting in Ben Wheatley's adaptation of J.G. Ballard's dystopian 1975 novel, High-Rise. "We got to push our boundaries," continues Luke Evans on appearing in the intensely claustrophobic film about tenants living in a posh 1970s skyscraper who increasingly become cut off from the outside world, leading to chaos, violence and anarchy within the apartment tower. The film, which premiered at the Tribeca Film Festival this year and opens in theaters today, also stars Tom Hiddleston, who joined the two for a chat about social media and its prophetic-like relationship to Ballard's story, New York versus London and how quickly humans can turn into animals.

How was it to work on High-Rise?

Tom Hiddleston: It was thrilling. The combination of Ben Wheatley, Jeremy Thomas and J.G. Ballard was intoxicating as a prospect. It delivered on every expectation. Ben, as a man, is incredibly kind and modest and gentle. And he creates an extraordinary atmosphere because his taste is fearless. The work he's doing is unique and singular within British cinema. He creates a very permissive environment for you to do that. And I loved it. It was just stimulating on every level. It was very physical because a dystopian apocalypse requires that commitment. But it was intellectually stimulating also. Each character is emotionally challenged. In my case, [my character Dr. Laing's] profession of detachment is challenged. He's a medical practitioner who can disassemble the bio-mechanical engineering of the human body, as it were, to distance himself from the symptoms of behavioral dysfunction. But that detachment is challenged because he is a man in the world. He is a man in his own environment and that aspect of himself is profoundly emotional. So yeah, it was great.

Sienna Miller: It was really fun. The environment was just totally creative and boundary-less. And the subject matter was chaos. Ben as a filmmaker creates an environment that's really free. And you kind of hear people talk about that but this was not a huge budget -- people were there because they wanted to be a part of this film. As a result, it just resonates. It's artistic and creative and liberating to be a part of something like this.

Luke Evans: Liberating is a very good word. It's how I felt everyday.

What kind of inspiration did you use when preparing for your roles?

LE: Somebody kept coming up in my mind -- Oliver Reed. Just because of the way he lived his life. He was a hellraiser and he had this fire in his eyes. A very intimidating presence when he wanted to be and incredibly charming when he wanted to be also. There was a very unpredictable nature about him. When you watch interviews with him you just didn't know whether he was going to give you a kiss or head-butt you. There was a real fine line depending on what you asked him. And I thought that was a really interesting energy to bring to [my character] Wilder. I felt like he was the same often. There's a scene in the film where he's chatting to this one woman at a party and this guy comes over and says, "Why are you talking to my girl?" and instead of just walking off because he was walking on territory he shouldn't have, he punches this guy in the face. And then absolutely pulverizes him. He's an unusual creature. Somebody you wouldn't want to meet on a night out, that's for sure. But I felt that person that we all know of as Oliver Reed was a perfect reference for Wilder.

SM: There was no one specific [inspiration] with me. I really felt like [my character, Charlotte Melville] was quite clearly who she was in the script and also in the book it was quite revealing. I thought about the '70s parenting techniques, which was just blatant negligence in many respects. And I thought about the class system -- who I would be in the high rise. Who she was. She's manic, she's kind of mercurial and she can seamlessly flip anywhere.

Did you find yourselves making parallels between the world in the film and the world we live in today, particularly with how isolated we are from one another due to social media?

SM: It's definitely an interesting point. There are many parallels. And I think that was the genius of Ballard. A lot of what we are experiencing now, he predicted. Not only in High-Rise, but in some of the essays, conversations and interviews that he did. He really saw this coming. Social media and what we're doing to ourselves and the culture is such a huge conversation. But it's really daunting. I feel like we are kind of heading to an extinction of sorts. A.I. [Artificial Intelligence] -- it's very real.

LE: It's very insular -- that what's weird about the story. They can leave at any point. That front door is never locked. They can leave but they choose to stay. There's something inside of them. They want to live this rule-breaking primal life. Breaking into supermarkets. Stealing things. Having sex with your neighbor. Killing your neighbor. All these strange bizarre things are going on yet all of them can walk away from it at any point. It's almost like a drug. What's deep inside of us is ignited in this film.

SM: It's interesting to see how quickly people without the infrastructure of society or the implications, [show] an aspect of humans that is very animalistic. When put in a kind of zoo-like environment, how do people implode? I think that's the brilliance of this film. You leave and you ask questions that are deep and profound and I think important. We're quite nullified with all of this technology, but actually when you break it down to basics there is this animal aspect. Especially represented by Wilder. He's just voracious and hungry. That really exists in people.

TH: Ballard was definitely fascinated with our obsession in technology. That's why Wilder has a Super 8 camera. There's homemade pornography that they film of each other and its projected on the walls even though it's 1975. Wilder gave an interview around the same time about High-Rise and his predictions. He was talking about live television and how extraordinary he thought it was that you can be in a suburb in London watching the news in California through a live feed. He said that fairly soon we'd be participants in a 24-hour television serial where we'd be the star of our own reel. I think that's what happened. He talks about having access to vast amounts of filmed material of every conceivable kind, which is Youtube. I think he saw it coming and to some extent the 'High Rise' is a man made substitute for nature. I think the novel challenges whether that's a good thing or bad thing. It provokes discussion.

There would be no story if your characters left the building, but why was it so difficult for them to leave? What kind of logic or backstory did you create for each of your characters about why they chose to stay?

LE: Well I think for Wilder's character, there's questions he wants answered. He wants to know who the architect is for a start. There's this man who lives on the top floor that he's never met, and he's fascinated as to how [his neighbor] Dr. Laing has turned up late and has become friendly with the top floor so quickly while Wilder has never been accepted into that echelon of society, which exists only a few floors above him. He wants to find out those answers. The only way to find them out is by staying and trying to find his way to the top. For him, leaving is not an option. He's actually dumped outside in a shopping trolley at one point and just gets back up, finds his camera and walks back in. It's bizarre to put yourself back into the lion's den. But he chooses to do that.

SM: People are clinging to the idea of what this is. For Charlotte, she's found her place in this world. The building is absolutely a character in this film. This is what they are told that they should aspire to be. This is the idea of living. I think even if it's bad for you, humans have this aspect of their nature that they stay in or they can't help but drive by the car crash and look. It's going to make you feel terrible, but you have to do it.

LE: And people follow people. Trends happen. There's a pack mentality in human nature. Especially in children. You see it a lot in school playgrounds. You want to latch onto the successful group or majority. We have this big trend in London of men having beards. It's traveled and transcended now all throughout the Western world -- I can't grow it and that's why I'm so bitter! But even things like that, people like trends. And I think in this story, you see everybody become part of this circus of damnation in order to avoid becoming the minority. It's really dark.

The film is set in London but had its premiere in New York, another city where it could easily have been set. Since you all travel back and forth between the two cities frequently for work, what are your thoughts on each place and what they offer?

SM: I feel like people come to New York to do something. I kind of dine out on that energy. No one moves to New York to take it easy. Everyone is here because they're like, "I have something to say, something to do and I'm going to do it." And that energy of it, without sounding too cosmic and new-age, I feed off. London feels clique-y and sometimes a little bit like swimming through mud. At the same time, the sense of history in London is staggering and beautiful and it's home in many ways. I find New York, at the moment, a little bit more inspiring.

LE: London falls asleep. London has a sleep mode. But New York doesn't. It never stops. My God, this city never stops! It's so noisy. I feel like in London you can turn a corner and you'll find a street with no traffic and no people. Here, I've tried it: it's impossible. It's impossible, I've done it. Literally, I've walked everywhere in this city. I lived here for three months. I couldn't find a moment of solace. It was a massive difference for me between London and New York. I love it though. I really love it.

SM: Not yet anyways!

SM: It's quite different. Also anyone can be a New Yorker. You can be from anywhere and be like you are a New Yorker. And I love that. It's totally multicultural but it's also embracing of culture. When something happens, like it snows, everyone is out there shoveling everyone's snow. In London if it snows, you'll just get someone doing their little patch. They bond together.

LE: I was here when that happened! It was like six feet of snow. It was extraordinary.