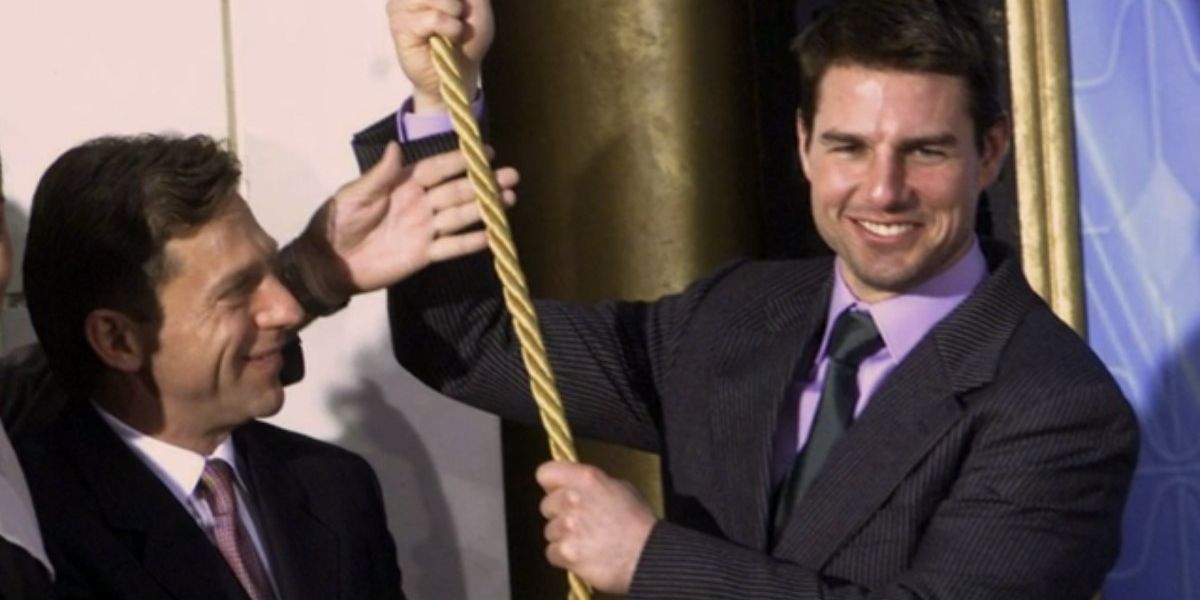 Tom Cruise & David Miscavige's Bromance Is Even Creepier Than You Thought

The Daily Mail released an "exclusive" exposé illuminating the oppressively bromantic love between Tom Cruise and David Miscavage--the current head of the Church of Scientology.

While the eye-roll-inducing and unshakable link between Miscavige and his star disciple is common knowledge, the details of their bizarre antics at the church's secluded Gold Base, provided by folks like former security advisor, Gary Morehead, and Tom's former personal chef, Sinar Parman, bring a whole new, cringeworthy layer to the affair.

On Tom's quest to lure David Beckham into the church:

"The Beckhams were due to come, but they never did. They leveled a field. You know the guys even learned about how to put patterns in the grass and stuff like that so it looked really well groomed.

"Cruise and Miscavige had just come back to Scientology HQ from a crazy party weekend in Las Vegas, and sat in their exclusive lounge and puffing away on the finest Cuban cigars. They threw down their winnings - bundles of cash so big, one hand wasn't enough to hold them."

Tom and David lowkey speak Thetan to each other:

"Tom would come out with all this stuff. He would talk to DM [David Miscavige] in this crazy way, his mannerisms were just unreal, all this tech speak. He would speak like the inner culture of Scientology, that's the way you speak if you're a complete Sci fanatic. He would pride himself on speaking in those buzz words."

Miscavige had a meadow of wildflowers planted near Tom's Gold Base residence, after the actor described a dream he had of running through a florally meadow with then-wife Nicole Kidman.

Nicole Kidman was too scared to eat anything:

"The only one I didn't know was Nicole, she didn't speak, she was very, very quiet, even though I would see her every day. She ate so very little, barely anything some days, so it was impossible to tell what she liked or didn't like. She was a bit spooked out, freaked out by it all. She had a little pasta, boiled eggs, toast, but hardly anything."

"At times, he was there pretty routinely, he would just sort of show up at the house. He would be there for a considerable length of time, days or weeks, and everybody had to call him "Sir" and everybody had to smile. There wasn't to be anything that would give him the impression that this was anything other than the ideal, perfect, most wonderful place in the world."

Only Tom can use David's private gym:


Only Tom and David's dogs can use Gold Base's private, air-conditioned kennels:

"Only Miscavige - and Tom - are allowed to use the kennels. The likes of Kirstie Alley and John Travolta never had that privilege, according to ex-members, even though 'Kirstie brought in some kind of a small marsupial, a deal she had with San Diego Zoo."

"[Tom] was also smoking cigars like they were going out of fashion, he'd have four or five Montecristo No 2s, torpedo shapes."


David is literally a psychopath:

"I know that there were two camera systems for Cruise – one was a camera he did know about - a JVC camera on a tripod - which made him believe that was it. But I had to set up a second camera in Tom's auditing room.

That was for Dave's own personal entertainment although it was meant to be for the purpose of being professionally critiqued.

It was Dave's little secret to look inside people's little sessions. If Tom ever wanted that tape, Dave would still have the other one.

I started installing these secret surveillance systems – hidden camera systems where Tom and other staff had no idea they were being watched, recorded and reported."