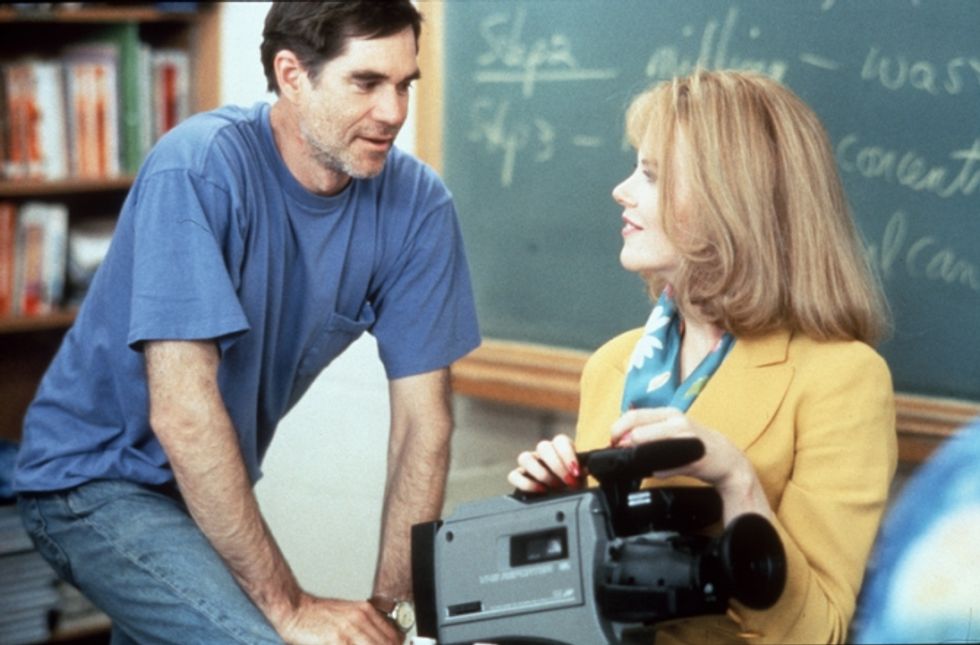 To Die For Turns 20: Director Gus Van Sant Weighs In On Its Legacy

by Cassie Carpenter
PAPERMAG
A still of Nicole Kidman in To Die For
It's been 20 years since Gus Van Sant blessed the world with his darkly hilarious film To Die For, and yet somehow it's never been more relevant. While the fame-hungry weather girl Suzanne Stone is frozen beneath an icy lake, her spirit lives on in a culture obsessed with selfies, sex tapes, reality TV, and manipulating the media.

The film, which centers on Stone, a narcissistic reporter who manipulates high schoolers into murdering her husband to further her own career, seems to have accurately predicted today's exploitative, manufactured stardom. Celebrity has become the new religion, and Suzanne was an early yet ruthless devotee, declaring: "You're not anybody in America unless you're on TV. On TV is where we learn about who we really are. Because what's the point of doing anything worthwhile if nobody's watching? And if people are watching it makes you a better person."

"[I] didn't have a clue that it would be as interesting as it is today," Van Sant says of the film.  "It was a year before I would witness my assistant send an email. So a lot was on the way. It was cable TV at the time that was the media bonanza."

Inspired by the 1991 Pamela Smart trial and based on Joyce Maynard's novel of the same name, To Die For was given a mesmerizing mockumentary format, thanks to Buck Henry's script. "Buck was able to make a very funny version of the story, I think, partly because he was extremely curious to the point of obsession about what I would call 'knucklehead American people and their love relationships,'" explains the two-time Oscar-nominated director. "Larry Clark had been to the [Pamela Smart] trial and shot pictures of it. At the time there was another media scandal that was in Oregon with Tonya Harding, then came O.J. Simpson."

Practically everyone in To Die For is delusional, especially Stone's teenage accomplices who "did everything but leave a business card" at the murder scene. The victim's skeptical, ice-skating sister Janice Moretto (played by Illeana Douglas) was one of the only characters not under Suzanne's spell.

"Illeana Douglas was really great. Her character is the only one in the film that isn't buying Suzanne Stone's style, and it put her in a different light from the other characters," Van Sant says. Douglas' co-star, Nicole Kidman, earned a Golden Globe for her perfect portrayal of the perky femme fatale, but she was not the first choice to play the self-absorbed Suzanne.

"Meg [Ryan] was someone that we had wanted and we met with her. At the time, she was one of the biggest actresses in the business," Van Sant reveals. "And I think it was a little unknown to her exactly what we would do with the story. But Nicole called us after a meeting and she said that she was 'destined' to play the role, and it made us confident that she would really try her best."

The Australian Oscar winner thought it was "wonderful" being able to play a character so "vicious" and she prepared for the tabloid role in an unusual way. "I checked into a hotel, ordered room service, watched TV for three days and went completely nuts doing it," Kidman told the LA Times back in 1995.

"The hypnotic effect of television is just extraordinary," she continued. "The way in which it gets into you -- you can't turn it off. Watching all those talk shows, all the yelling. You're like this first (widening her eyes). It's everything you look down your nose at and then you're (screaming) doing everything the audience is doing. You have to go 'Whoa!' That's how I understood [Suzanne]. That's what she's been raised on. So she's a victim of society, a victim of that."

And the binge-watching worked. "When she was on the set she was ready to go -- she knew every scene, could do exercises for every scene, [and] knew the script backwards and forwards. She actually helped me wrangle the kids when we filmed," the director recalls.

Gus Van Sant and Nicole Kidman on the set of To Die For
"Joaquin I knew through his family and his brother River [who starred in Van Sant's My Own Private Idaho and passed away from an overdose in 1993]," Van Sant explains. "But also I knew him from Parenthood, in which he played an amazing character. He also worked very hard to get into his role, and he hadn't been acting for a long time but he took it so seriously, and I was grateful for that."

And Joaquin had a surprising way of slipping into his romantically forlorn character between takes. "I remembered he used to listen to Barry White in his trailer when we weren't shooting," Van Sant notes.

R&B slow jams aside, the Portland-based filmmaker filled out the rest of his ensemble with memorable performances from Alison Folland, Casey Affleck, and Matt Dillon.

Somehow, two decades on, Suzanne Stone -- a swirl of gingham and heavy metal -- arguably remains Van Sant's most iconic character onscreen. And that's saying something for a director (known predominantly for serious fare), who introduced audiences to a superstitious junkie, a narcoleptic hustler, a belligerent genius, and an openly gay politician.

"I was surprised that it got made," Van Sant marvels, looking back. "I think I'll [always] remember it as an interesting collaboration between all of us, Buck Henry, producer Laura Ziskin, Nicole Kidman, and myself using Joyce Mayard's book - and [I] have grown really fond of it."
Photos courtesy of Columbia Pictures
You May Also Like
Fashion