To Be a Korean-American After the Virginia Tech Nightmare 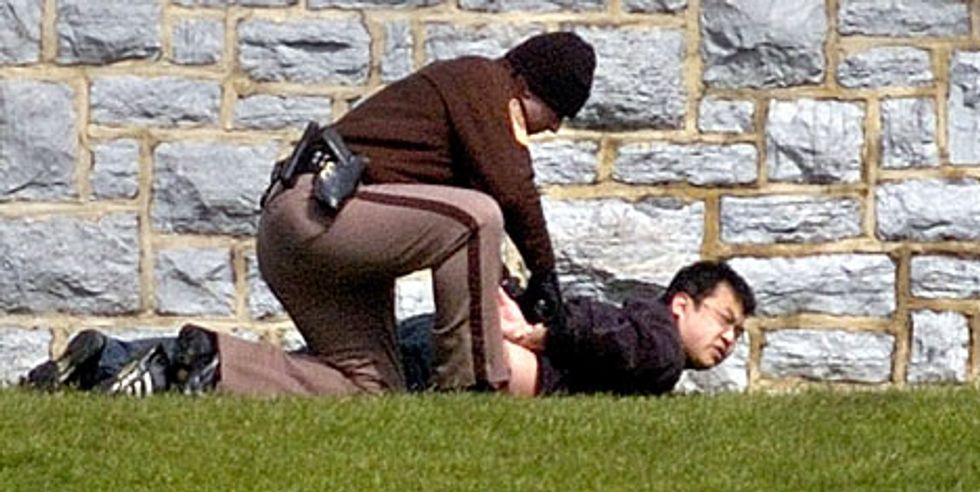 By yesterday morning the whole world knew the guy behind the beyond-tragic shootings at Virginia Tech. Every headline read that the killer was "a 23-year-old student from South Korea." And then it was cemented forever that he was a loner. While it is legally correct that Cho Seung-Hui was a Korean native, a resident alien in the U.S. and a South Korean immigrant (all descriptions used by the media), many of the articles made it out as though he had just come off the boat last week -- when in fact he was a mere 8-year-old when his family emigrated to the U.S. None of these facts excuse the monstrosity of his murderous act -- though beyond his green card status, he was a seriously disturbed social-outcast.

I feel like the media is not owning up to the fact that he was more or less a common law American. They're emphasizing his foreignness in order to further demonize a murderer who is already dead. And for what purpose? To perpetuate a racial backlash and deepen the remorse and paranoia that already exist among the Korean-American community? (nytimes.com has been flooded with comments by Koreans all over the world expressing apologies and regrets.)

Like so many, I've been freaked out, haunted and saddened by the nightmare at Virginia Tech. I've been following the news closely since the moment I first heard it on jetBlue en route from North Carolina (it's a weird thing to hear the biggest breaking news while on an airplane -- it had never happened to me before.) Later that night back in New York, my obsession with following the news grew even more when I found out that the suspect was an Asian male. After hitting many global news sites, I came across this unsettling photo (above) in the UK's Daily Mail of an Asian man on the VT campus being handcuffed. I was confused because I had thought that the gunman had killed himself after the rampage. I hope nothing happened to this guy. I see him and I see the faces of my own friends, cousins and brother. And I hope that we don't lose sight of the real issues at hand here.