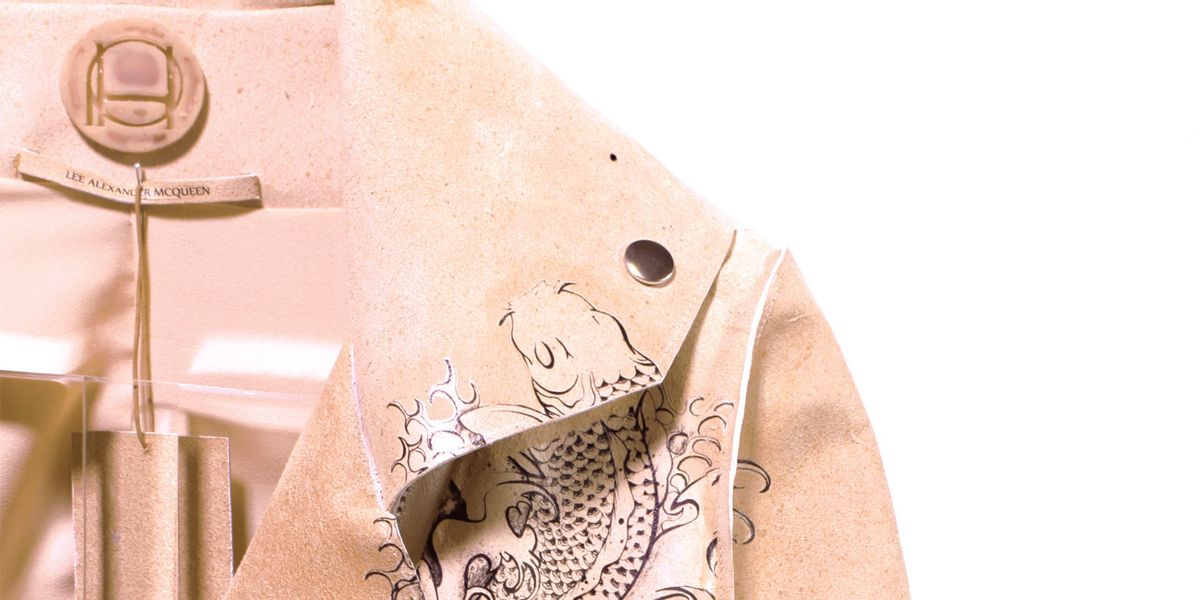 Though aspiring design students often struggle to get their names out there, Central St. Martins design student Tina Gorjanc's has had no trouble getting press. This is mostly thanks to her much-written about thesis project, "Pure Human," which envisions clothing and accessories made from tanned, lab-grown human skin.

It's a memorable, if not spooky, concept that, somehow, gets even odder: The skin Gorjanc wants to work with will be harvested posthumously from hair recovered from the designer Alexander McQueen, who committed suicide in 2010.

The endeavor has run into a landmine of practical and bioethical questions -- a topic Gorjanc said she became interested in after enrolling in CSM's Material Futures masters course. And while the project is still in its conceptual phase, the mere act of mocking up her project with pigskin has sent the Internet into a frenzy, with some hailing it as "the future" and others calling it "a crime."

We reached out to the London-based designer about her personal ethical views, current legislative loopholes and, of course, what McQueen himself would likely think of the project. No need to be squeamish.

How did this project come about? Were there any particular cases or stories that spurred it?

In my second year of [Material Futures] I become interested in the ethics behind biotechnologies and started researching medical cases that dealt with those issues.

The case of Henrietta Lacks was one of the first that dealt with the "theft" of genetic information. It's fascinating how much we can still relate to that story in our current time, as there's not been much improvement [in regards to the ways we use and] exploit bodily materials.

That kind of exploitation first happened in the medical field in the 1950s (with the aforementioned Lacks case), and later with John Moore, whose biological material was extracted...and ended up being copyrighted [for the purpose of] product development (aka cures). However, the patient never gave their consent for it and got no benefits.

Today, the luxury industry is investing in biotechnologies and I find the intersection of those fields fascinating. But the source of some of the products that are being developed come from surgical patient "leftovers". As the patient is not expected to keep [their removed cancer cells, etc.], they belong to the institution executing the procedure. Those materials are then sold to bioengineering companies as a stem cell source. And if those companies are collaborating with a luxury brand, the cells would be produced into products and copyrighted by the manufacturing company.

Can you speak a little more about the legal shortcomings surrounding current protections of biological material? What do you think is the biggest loophole present in current legislation?

The [current] legislation that deals with the ownership of biological materials within the medical field states that bodily tissue is not considered stolen when it is obtained from a doctor through tissue or blood samples -- this basically means that a person loses the ownership of his biological materials as soon as they leave his body. [Like,] if you get a haircut at the hairdressers, you don't own the hair that was cut off.

Those kind of materials are even less protected in other fields, as they weren't previously used for any other purpose. I believe that it's essential to reset legislation so that it's up to speed with the advances of biotechnologies. Currently, the law still considers bioengineered products in the same category as transplanted organs. I believe this categorization to be wrong because of the difference in their origin. The bioengineered products were developed in the lab [sans consent, while transplanted organs are consciously donated ahead of time by their owners]. We would also need to define boundaries when it comes to ownership of genetic material, as we don't have much to go on in that section ether.

Obviously your project has raised a lot of questions in regards to bioethics, with everyone from the Guardian to PETA weighing in. Where do you personally stand? Do you have moral qualms about what you're doing or does the end justify the means?

I believe that the field of biotechnology requires the development of new terms that will define its products. We usually try to fit products made from such technologies into terms like natural or synthetic, but none of them can really describe their true origins. [Current legislation also] allows us to patent human genetic information, as the products developed with biotechnologies are synthetically developed and are categorized as such and can therefore be copyrighted.

On the other hand, I believe biotechnology is bringing up an interesting question regarding the ownership of genetic information. For example, if we look at the aforementioned case of John Moore, he wanted to protect the exploitation of his genetic information by claiming ownership over his bodily material -- which in principle is a fair claim. However, his bodily materials on their own do not represent any innovation and would therefore never be copyrighted for their individual characteristics. The invention came from the scientist who used his scientific knowledge to develop a cure based on Moore's genetic material.

I believe that there are numerous potential applications in the commercial market [for lab-grown skins] -- more sustainable alternatives to today's processes. For instance, bespoke laboratory skin for cosmetic testing would minimize or even remove the use of test animals, and laboratory-grown leather could also replace some of today's cruel leather producing techniques.

Why do you think it's taken so long for people to regulate consumables that incorporate human elements? i.e. the underground market for tooth earrings or skulls on Etsy, the whole Boneghazi situation, etc.?

It's really interesting how we as a society still have a really taboo relationship with human bodily materials. The common reaction to human leather is disgust, while animal leather -- which is still obtained under much more cruel conditions -- is still regarded as a common, everyday material.

However, I must add, that human materials developed with biotechnology are fundamentally different than human materials obtained in a 'natural way.' Bioengineered human material does not require an element of death, and they are developed by growing and multiplying a [single cellular] source.

If all goes according to plan, when do you think the first samples will emerge?

I am aware of companies already trying to develop laboratory-grown leather as a sustainable solution and, as I understand, they have already succeeded in growing samples of the material. However, before such a material is introduced into our mass commercial market, it still has to adjust its process to fit a production system that enables the development of specific quantities.

What do you think McQueen would think of your project?

Unfortunately, we will never know. However, I have received some feedback from the public that [seems to indicate] that he would find the concept of the project intriguing.

Do you actually think we'll get to a point where people will be desiring lab-grown human leather, as PETA seems to think? In your opinion, how feasible is this dystopian reality you've created?

I believe [this sort of advancement] will first happen outside of the human body, where it's more acceptable to our society. Therefore, my speculative collection represents just one of the potential applications that will occur in the transitional stage of the technology. It can be easily applied to other sectors of the luxury industry, and it probably will.