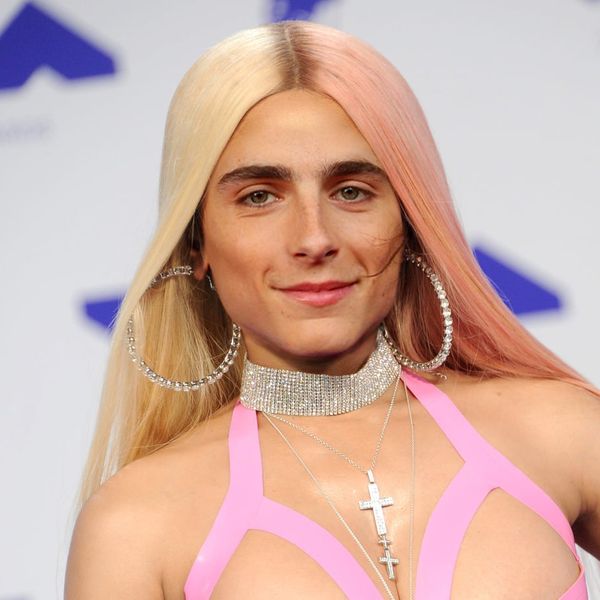 Timothée Chalamet Is a Barb, as He Should Be

It's no secret that us Barbz have had it rough over the past few years, what with constant flack and bullying from other standoms in the Twitter universe — but it's good to know that Nicki Minaj fans have an ally in the form of the one, the only, Timothée Chalamet.

A clip resurfaced on Twitter recently of Chalamet performing "Roman's Revenge" at what appears to be a school-wide talent showcase of some sort, donning a white tank top with Minaj's face and name printed on the back. The acclaimed track from Pink Friday, Minaj's debut album released in 2010, takes on some twisted new form with Chalamet's performance, complete with back-up dancers and a pink bob wig.

timothée chalamet imitating nicki minaj is the most wonderful thing there is and I can prove it!! @RealChalamet https://t.co/OWlB3q6mwN
— 𝖊𝖒𝖊𝖗𝖘𝖔𝖓 (@𝖊𝖒𝖊𝖗𝖘𝖔𝖓)1533242578.0

It's evident that Chalamet is in his element performing the song, nailing every lyric — save for expletives — and delivering every "Raah, raah!" with enough fervor to rattle the auditorium. In true Barb fashion, he also nails some light choreo to the delight of his classmates who scream each verse along with him.

@josexswift @midzommar The way he paused and cupped his mouth for one calm moment and then as soon as he said Roman… https://t.co/6fEdII7HP2
— joe jonas rights (@joe jonas rights)1574392325.0

This also isn't the first piece of evidence that Chalamet is a Barb. He's dropped a paper trail of evidence for stans to comb through and discover the affiliation. In another clip from a red carpet event for The King, Chalamet answers a passionate fan's question about his favorite Minaj track, which he admits is "Roman's Revenge." Now that's some good meme foreshadowing.