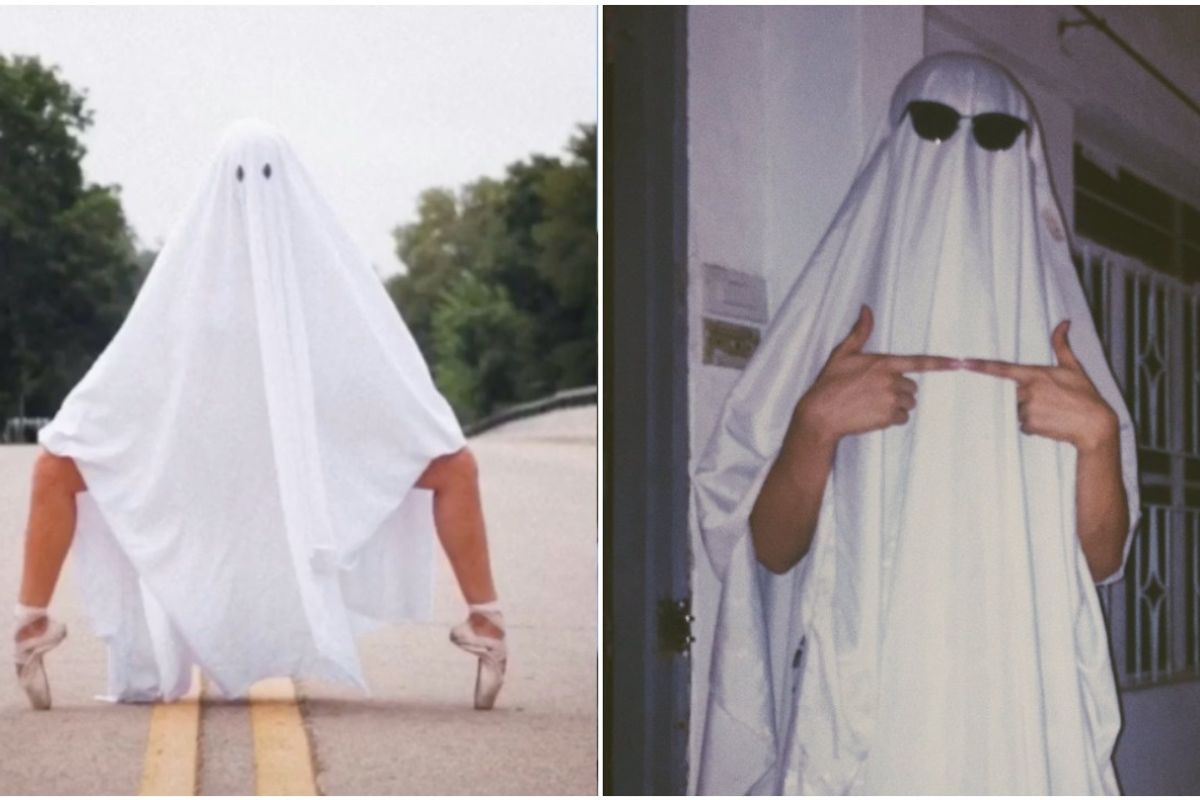 original tweet thread included POC participants. We have also included more of her response to the criticism surrounding her thread.

A new TikTok trend in which participants dress up as ghosts has sparked a fierce online debate.

With the end of the pandemic nowhere in sight and just a month until Halloween, teens have apparently begun posing in white bedsheets under the #GhostPhotoshoot hashtag. That said, the shoots have also since incurred a fair amount of criticism due to the costume-in-question's resemblance to the Ku Klux Klan uniform.

Granted, while the bedsheet ghost costume has been around for a while and doesn't feature a pointed hood, a number of people argued that the photo shoots were still "tone-deaf" and "insensitive" — especially amidst the ongoing Black Lives Matter movement.

There’s no way I’m the only one thinking this is insensitive, right? Like, do you not see the similarity between this and KKK costumes? And with #BLM still having to defend that their lives do in fact matter, no one had the thought of like, let’s not?

"I can imagine the diversity behind these sheets isnt very different than the color of the sheets they're behind," as one commenter noted, while another person said that, "If i saw a group of people dressed up like this, i would run for my life."

I can imagine the diversity behind these sheets isnt very different than the color of the sheets theyre behind.

if i saw a group of people dressed up like this, i would run for my life.
please think about the possible associations with this ghost trend. https://t.co/oF01rXnYYl

Meanwhile, others defended the trend by saying that there was nothing "malicious in kids putting on old-timey ghost costumes and taking pics with friends."

If you're choosing to see something malicious in kids putting on old-timey ghost costumes and taking pics with friends, they you really need to get off Twitter and find some joy in your life. SMH.

However, the conversation surrounding Ghost Photoshoots came to a head on Monday after a Twitter thread by New York Times culture reporter, Taylor Lorenz, went viral.

A tiktok trend rn that’s big with teens is to dress up in sheets and take ghost photos. It’s the first day of fall, so here’s a thread. pic.twitter.com/zWH0H13Acx

After being accused of "whitewashing" the trend — which some people claimed started on "spooky hood alt TikTok" — Lorenz pointed toward several videos in her original thread, which featured POC participants. In a subsequent interview with the Daily Dot, she also noted that the trend seems to have started in Asia.

"People of all races and backgrounds are participating in this trend. It's a fun spooky Halloween thing that's easy to do and safe in COVID times," she said in another tweet. "Please stop trying to cancel ghosts."

Btw people of all races and backgrounds are participating in this trend. It’s a fun spooky Halloween thing that’s easy to do and safe in COVID times 👻. Please stop trying to cancel ghosts 🤦🏻‍♀️ pic.twitter.com/fyTHZ7NjbM

If you’re one of the many people trying to cancel literal children for dressing themselves and their pets up as ghosts while trying to celebrate yet another holiday they’re largely being robbed of b/c of COVID please unfollow me and go away pic.twitter.com/7CDLGmJE44

Kids in Korea and South Asia and Australia have been on the ghost photoshoot trend since last week 👻 pic.twitter.com/mPQrueEeEz

However, Lorenz also went on to apologize for any offense the thread caused, though she added the trend was innocent, especially seeing as how "bedsheet ghosts have been around for hundreds of years (since Shakespeare days) and are frequently portrayed in pop culture."

Bedsheet ghosts have been around for hundreds of years (since Shakespeare days) and are frequently portrayed in pop culture. I didn’t anticipate how angry ppl would be that this is still a popular kids Halloween costume! but I appreciate everyone who shared their thoughts. pic.twitter.com/7GVkqu2aKM

Still, as people like writer Nylah Burton wrote, Lorenz's adamant defense felt like a belittlement of all "the trauma and the impact this could have on actual Black folk like me, whose families have actually been terrorized by the Klan."

I think people are more interested in cancelling you for belittling the trauma and the impact this could have on actual Black folk like me, whose families have actually been terrorized by the Klan https://t.co/xK1X0QU5xZ

In her interview with the Daily Dot, Lorenz also apologized again for offending anyone, saying that it was "a totally valid gut reaction" for people of color to be initially taken aback by the images. She also called the first photo in her thread a misstep as it shows several people in bedsheets standing in a row. However, she pushed back against criticism of POC participants being put further down the thread by saying that she "literally just shared the ones that I liked on my phone."

"Things are lost in communication… but if people want to say 'these are problematic costumes, and we don't want them anymore' that is fine," she told the publication. "I just think people need to have that conversation as a society, and recognize that this costume is hugely popular, not just for Halloween. This is a thing that people do, so if it's not acceptable anymore, I just think that needs to be a broader conversation."

Either way, the Ghost Photoshoots have continued to spur discussion on Twitter. See what else people are saying about them, below.

Actually, it's been a trend sinche the XIX century pic.twitter.com/8sLQy0SejB

they’re wearing sheets to be ghosts... this isn’t new why are people just now having a problem lmao

white kids in the replies calling this a reach... with blm in their bio and names... as expected... pic.twitter.com/YnIwNAfqxX