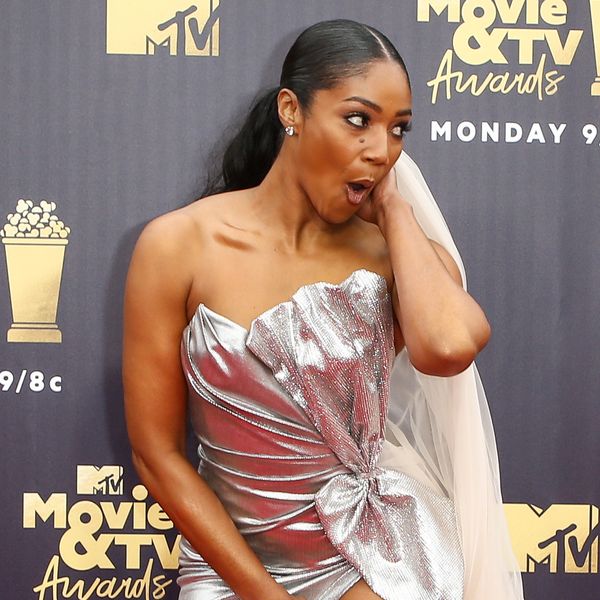 Here's Why Drake Stood Up Tiffany Haddish on Their First Date

Comedian supernova Tiffany Haddish, the queen of our collective hearts and the woman who has worn the same Alexander Mcqueen dress on four separate public occasions, has revealed she almost dated Canadian rap superstar Drake. Emphasis on almost.

Joining Jada Pinkett-Smith on her Facebook Live show Red Table Talk, the Girls Trip star revealed Drake asked her out to dinner after she starred alongside many other female entertainers in his "Nice For What" video. Haddish told Pinkett-Smith she took a personal day to prepare herself for their date, only for the mogul to pull out at the last minute.

Related | Tiffany Haddish Received $13 Wine For Presenting at the Oscars

"I blocks all this time off, like shoot, I'm gonna get my mustache waxed, you know what I'm saying?" She explained. "Get my armpits waxed, got me a nice little dress. Then I'm like, 'So what time are we heading out? Are you sending a car? Where we going?'" Tiffany said. "And he's like, 'Oh, man, my bad.'"

Apparently, Champagne Papi had to rush back to Canada for a "family emergency." Haddish, who recently hosted the VMA's, presented at the Oscars, has four films slated to come out in 2018 and three next year, does not just take time out of her busy schedule for anybody, claimed she could have been making stacks of cold, hard cash instead of primping for Drake.

Drake is also a busy man. Fans are waiting with bated breath for his fifth album, Scorpion, which is set to be drop this Friday. Check out the trailer, below.