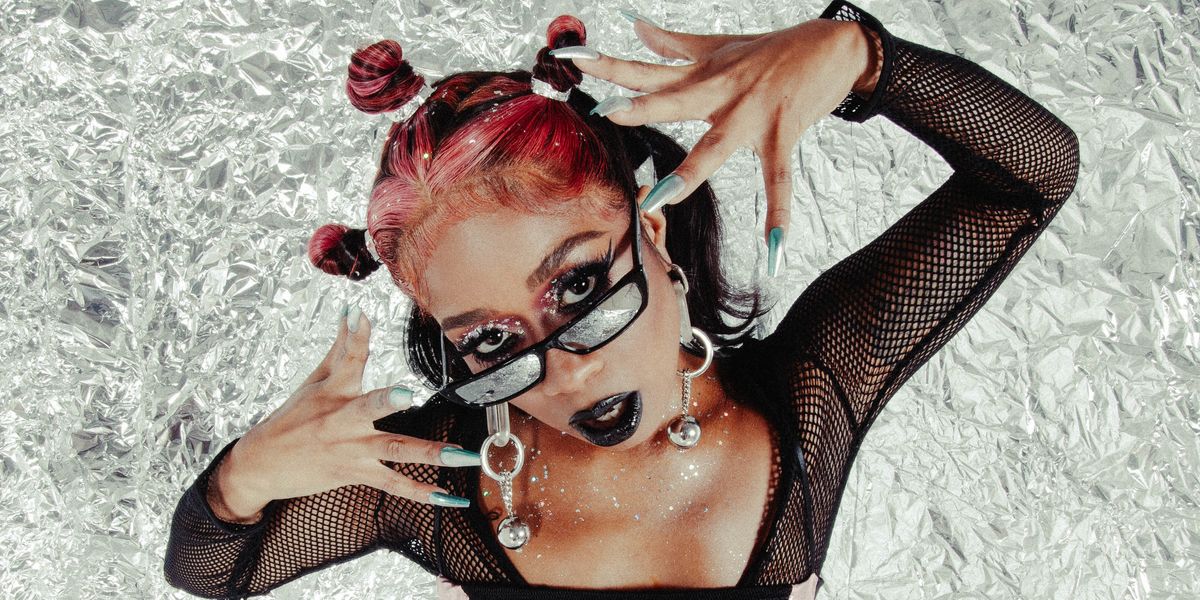 TiaCorine Tells the Stories Behind Her New EP

With her sharp hooks, fierce rhyming skills and a sultry voice, up-and-coming rap superstar TiaCorine has arrived with 34Corine. The EP, containing eight tracks with titles such as "Forever," "In My Room" and "Avril Lavigne," is what TiaCorine refers to as her introduction, unapologetically showing the world who she is.

The North Carolina-based rapper is best known for her viral single, "Lotto," in which the lyrics, "I don't give a fuck, I'll beat a bitch up," went viral this summer on TikTok. Now, she says she's "trying to show people how versatile I am and bring them into Tia's world. I want to show everyone something different."

Below, TiaCorine gives PAPER a track-by-track breakdown of the entire project.

I just broke up with my boyfriend, blessings were coming in and I was feeling myself. I caught a few sneak disses online, so I felt like addressing those in this song. [This is the] first song where I punched in the whole way through and I recorded this mid-day, which was very different; I usually record at 6 PM. I had been recording soft-toned songs and [that day] felt like showing off. I can really rap and I'm tired of people trying to make competition for me in my own city because I don't just sound hard, I am hard. I am very lyrical and I have my own flows, so I just wanted to remind people that I really do this and ain't nobody up against me, I got everything.

My boyfriend pissed me off. He's always doing little dumb shit and broke something of mine. So basically I was freestyling off how I felt: "I know you know but here we go/ And that's that same shit I know I seen before/ See that's that lame shit you know I can't ignore/ So nigga don't touch if you know you can't afford." The whole time I am talking shit to him and just letting him know I'm that nigga. I said, "You say you happy but I know you still be doubting me/ Some bitches overseas telling me how they so proud of me." Sometimes I feel like he isn't excited about my success or achievements like he should be, so that's where that first line came from.

"I just popped a bean shit nigga, what's a bean?" — that's from a true story. So basically my little cousin Shania asked if I wanted a bean and me being down for whatever — cause I trust my cousin — said, "For sure." So after I took it I said, "What's a bean?" and she laughed in my face and said, "How you goin pop something and don't even know what it is?" We both just laughed and then I put on a instrumental someone sent me. I just started snapping from there. I felt like going off; I was flowing so effortlessly, I was talking that shit. People really don't know I'm hard. I love pink, but I'm not sugar, candy and rainbows. I been through some shit. I don't cap in my raps, everything I say is really real. I speak on personal experiences, real situations and what my friends do.

I freestyled the beginning, "I got 10 bad bitches in my room," because I literally do. Everywhere I go I always have bad bitches with me — all kinds, shapes and sizes, and all of my friends are so beautiful inside and out. "You got locked out/ Bitch you know that you doomed." That's just some real shit; so many people cancel themselves out of a good partnership/friendship, it is sad and disappointing. I've had so many people come in and out of my life because they wanted to fuck me over, and now I just laugh and thank Yah for getting them out of here... because everyone can't come.

I met Cardo at the airport leaving LA. I was out there for four days meeting with Interscope. He asked for my contact and gave me his number and told me to text him some music. I texted him "Lotto," he replied with fire emojis. Couple days later I sent him three unreleased songs. He FaceTimed me and he told me how hard and different I was, said I was gonna change the game and that ima go up ion need no label. I was in shock because I listened to Wiz and Curren$y coming up learning how to work, so someone who produced these songs is telling me that ima change the game, it was so crazy. So he said he was gonna send me some beats to my phone as soon as he hung up and he did exactly that. One of the beats was what I used for "34 Faucet." I was recording at Sonny Digital's studio at the time and that's where I made "34 Faucet." 34 is for Winston-Salem and faucet is drip, so this that 34 drip on this track.

I was recording with Slade Da Monsta; Sonny Digital walks in and says, "Aren't you TiaCorine? I been tryna work with you, how long you out here? Take my number down, let's get in the studio tomorrow." So tomorrow comes, he plays me three beats the third beat I'm like, "Yes this is it." He's like, "Do you know how to record yourself?" I said, "Yes, but only on Logic." He said, "Well, you finna learn Pro Tools cause I'm not finna record you." So he literally teaches me in 10 minutes how to use Pro Tools. I got work and engineered the whole song myself. Afterwards we played basketball outside for like two hours, it was so random but we were all just vibing and having fun.

This was a crazy time for me, I took off on one song! I dropped one song previous to "Lotto" and it was doing okay. It got me buzzing, but then I dropped "Lotto" — a song I didn't even like that much — and it just went viral. I was being played on 102 Jamz, hitting a mill, and going viral on TikTok and Twitter. "Lotto" really changed my life; every label was calling, emailing and flying me out. This was the start of everything.

I loved waking up listening to VH1 and MTV in the morning, playing Avril Lavigne and Pink. I had been feeling like such a rockstar and my goal was to record on a punk, rockstar beat. The first few times I attempted getting a beat made it didn't go so well, but then I linked with Jerm and Steeze at my in-home studio and together they made the perfect rock, Pink beat — the exact kind I wanted. I got on the mic and just let loose; I can't really explain what happened, it just happened.