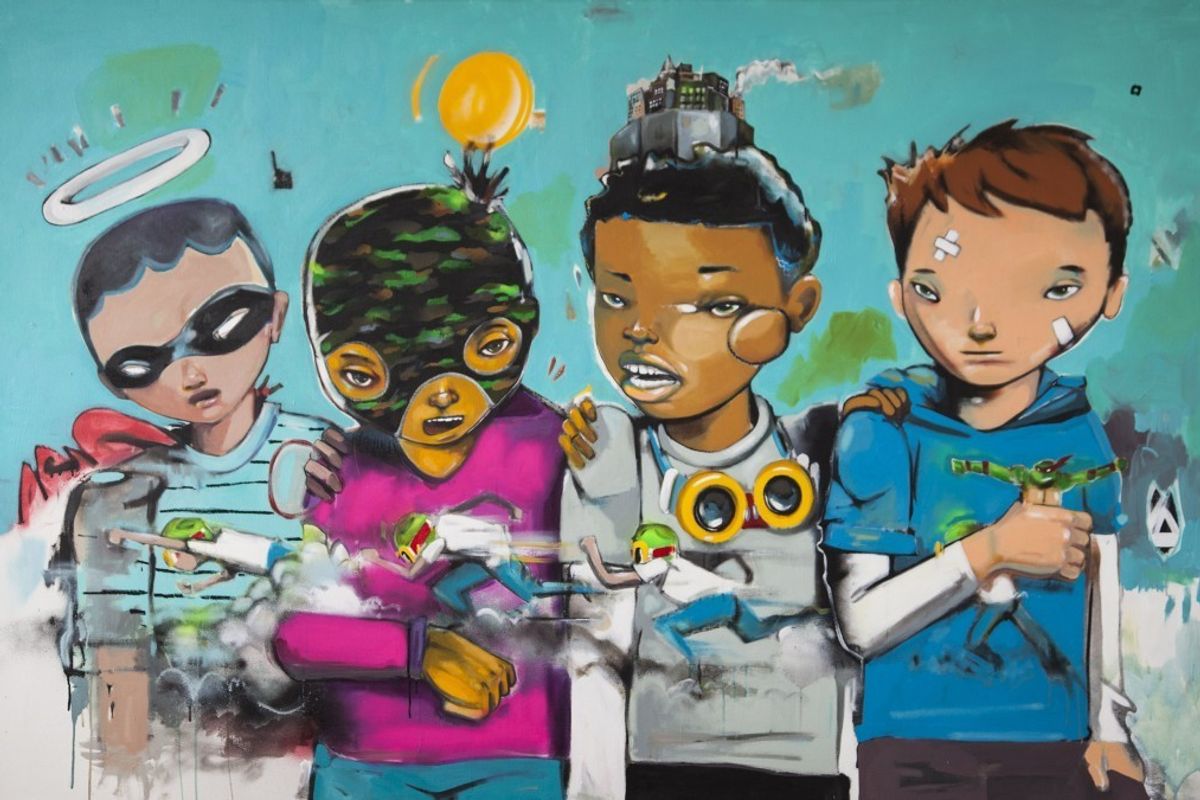 The non-profit arts org NADA opens the 14th edition of their Miami Beach fair at the Deauville Beach Resort (6701 Collins Avenue, Miami Beach) with over 100 exhibitors from 17 countries. Their preview is today until 2 p.m., and then it's open to the public until 7 p.m. and daily through Sunday with a $20 single day ticket. Check out the "temporary reappropriation" of Katz's Deli by Laila Gohar and Nikki Cohen in the gift shop today through Saturday (and have a pastrami sandwich); and the "immersive lounge installation" by Exhibition A on the hotel's ground floor.

PULSE Miami Beach is back in Indian Beach Park (4601 Collins Avenue, Miami Beach) for their 12th edition, featuring over 75 local and international galleries. Their VIP, "invite only" preview brunch is today 1 p.m.; and then it's open to the public daily through December 4. They also have a "Young Collectors" cocktail party on December 1, from 5 to 7 p.m. Check out the site-specific installation, "Miami Marbles," at the fair's entrance by digital artist Anne Spalter. The artist used photos and videos of the city to create abstract images on large spheres.

The second edition of the Satellite fair moves into the Parisian Hotel (1510 Collins Avenue, South Beach) from Thursday, December 1, thru Sunday. This is an artist-run and concept-driven alternative fair that includes music, performance, new media and technology. For example: They're planning a a queer strip club, a virtual reality lounge, a post-feminist tattoo parlor and after- hours entertainment in the hotel's penthouse curated by NYC alt venue Trans-Pecos. Look for the giant milk carton and cereal bowl out front by the art duo Jen & Paul.

Miami Project 5 runs from December 1 through 4 with 50 global galleries showing at Indian Creek Drive and 67th Street, Miami Beach, a block away from the NADA fair.

Norwegian DJ and musician Cashmere Cat, Jillionaire (Major Lazer) and Uncle Luke (Luther Campbell) are all performing on the terrace of the Perez Art Museum Miami (PAMM) tonight, 9 p.m. to midnight. The event is free, but only open to the museum's sustaining and above level members and AB/MB VIP cardholders. Become a member HERE.

The grand finale of the 7th Annual Bombay Sapphire Artisan Series — hosted by Russell Simmons and Danny Simmons — is Thursday, December 1, 8:30 to 11:30 p.m., in the Herzog & de Meuron-designed parking garage at 1111 Lincoln Road in South Beach. The event celebrates the 16 finalists before the announcement of this year's winner. NYC arts org Creative Time is the honorary judge and there's music by Jermaine Dupri. Note that this is "invite only" with RSVP mandatory. The annual Rush Foundation Art for Life charity auction is also tonight at SLS Brickell (1300 S Miami Ave., Miami) starting at 6 p.m.

French perfumery and fragrance house, CARON, is partnering with Superfine! "The Fairest Fair" for an interactive art installation created by local Miami Haitian artist Asser Saint-Val. Titled "The Philosopher's Stone: Awaken Your Senses," the work will be on view from December 1 thru December 4 at the fair's new Midtown Miami location, 56 NE 29th Street. Superfine! has tons of other daily activities including installations (Jen Clay, Nice 'N Easy), bands (Afrobeta, K Pasa USA) and a tea party on Saturday, 7 to 11 p.m., with DJ Lady Miss Kier from Deee-Lite.

FREE ART! That's right, the Super 8 hotel chain is currently re-doing their decor in North America and updating their art collection, so they'll be giving away 100 works on a first-come, first-served basis from 8 to 10 p.m. on Thursday, December 1, at 2213 NW 2nd Avenue in Wynwood.

Miami's artist-run space Dimensions Variable (300 NE 2nd Avenue, 3rd floor, Miami) will open their new 3,000 square-foot gallery in downtown Miami with a group show called "The Rest Is History" today and on view until January 5, 2017. Over 13 international and local artists are included in the show. DV was founded in 2009 by artists Frances Trombly and Leyden Rodriguez-Casanova and the new gallery is a partnership with Miami Dade College.

Norma Kamali and Diamonds Unleashed CEO Kara Ross host a wearable art exhibition called "Wear Your Heart On Your Sleeve" that's on view through December 4 in the lobby of the Mandarin Oriental Miami (500 Brickell Key Drive, Miami). Twenty artists have contributed one-of-a-kind dresses including Julia Rich, Georgia Grey, Carly Jean Andrews and Stuart Hemple; and all will be auctioned with funds donated to non-profits that support women's empowerment. The VIP opening is tonight at 8 p.m.

Check out "Off-White c/o Ben Kelly," an installation at 3814 NE 1st Avenue in the Design District, 6 to 8 p.m. tonight with a DJ set from Virgil Abloh. RSVP mandatory.

SURFACE Media hosts a talk and video installation with artist Ben Jones and Pusha T on Thursday, 6:30 to 8 p.m., at the Miami Marine Stadium in celebration of Adidas Originals EQT, and a private pajama party (w/ 21c Museum Hotels) in the Design District Palm Court on Thursday, 10 p.m. to 2 a.m., with The Skins, Narcissister, Joseph Keckler and DJs Mia Moretti and Devin Lucien. The entire SURFACE event list is HERE.

Be sure to stop by The Bakehouse Art Complex (561 NW 32nd Street, Miami) during the week and check out their 60 resident artist studios.

Design Within Reach and Regan Arts host the launch of Trey Speegle's new book "Yes: Transform Your Life With Color By Number" on Thursday, December 1, 6 to 8 p.m., at DWI (4141 NE Second Avenue, Miami)

The Savannah College of Art and Design curated an exhibition called "Theater of Self" featuring work by the London-based artist and designer Daniel Lismore at 1601 N Miami Avenue in Miami. There's a VIP opening on Thursday from 6 to 9 p.m. with rsvp mandatory.

The FREEHAND Miami (2727 Indian Creek Drive, Miami Beach) hosts a spotlight on Mexican artists on December 1, 7 to 11 p.m., with live mural painting by Diana Garcia, DJ Eyal Agai and Don Julio cocktails. Plus they've got a party for women artists from the Miami area with Wild Belle DJing on December 2, 7 to 11 p.m. And, since they are opening another Freehand in LA soon, they've also got a pool party for California artists (Lauren Ys), DJs and vendors (Adina Mills Jewelry, Vida Kush) on December 3, 1 to 6 p.m., with Midori cocktails.

The Surf Lodge pop-up at the W South Beach has a party for artists Katherine Bernhardt and Eduardo Sarabia. RSVP mandatory.

Pussy Riot plays in the Up&Down tent behind the Nautilus Hotel (1825 Collins Avenue, South Beach) tonight at a party for NYC gallery The Hole.