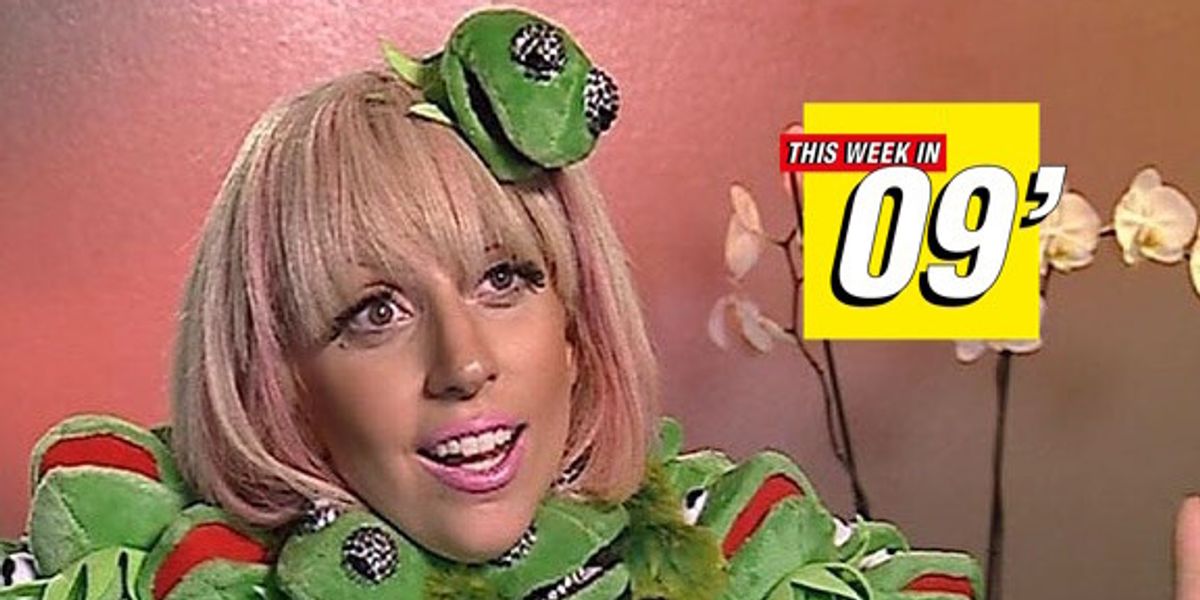 This Week in 2009: Gaga Wore Her Iconic Kermit Coat

Lady Gaga wore this incredible Kermit the Frog coat by Jean-Charles de Castelbajac during an appearance on the German breakfast TV show Punkt. She explained the slightly creepy fleeced Kermits were a PETA-approved statement against wearing fur. (She actually got in trouble with the organization a few years later after wearing various non-muppet animal skins in public.)

Mika released "We Are Golden," the first single from his sophomore album. (The LP that gave us "Grace Kelly" proved a hard act to follow.) "I Gotta Feeling" by the Black Eyed Peas was the number one song in America. Amy Winehouse and Blake Fielder-Civil divorced after two years of marriage, with Fielder-Civil then demanding an almost ten million dollar settlement. And two workers died at a Madonna concert in France.

Unlikely White House power couple Ivanka Trump and Jared Kushner got engaged this week ten years ago; she converted to Judaism ahead of the wedding, which occurred just three months later. Chris Brown finally released a public apology for assaulting Rihanna, who by that time had moved on to way bigger and better things. A post-OC Mischa Barton, or "Mushy," as Perez Hilton cruelly called her back then, was losing acting roles due to addiction and mental health issues. Tween dreams Demi Lovato and Trace Cyrus broke up.

Harry Potter and the Half Blood Prince was breaking box office records. LC's replacement Kristin Cavallari signed on for another two seasons of The Hills. People magazine reviewed Lindsay Lohan's new movie by saying it was "just another ill-fitting piece in the puzzle that is her stalled, sloppy career." Britney Spears' ex-husband Kevin Federline landed a soon-to-be-canceled reality TV show with his new girlfriend. (RIP also his and Britney's effort, Britney and Kevin: Chaotic.)