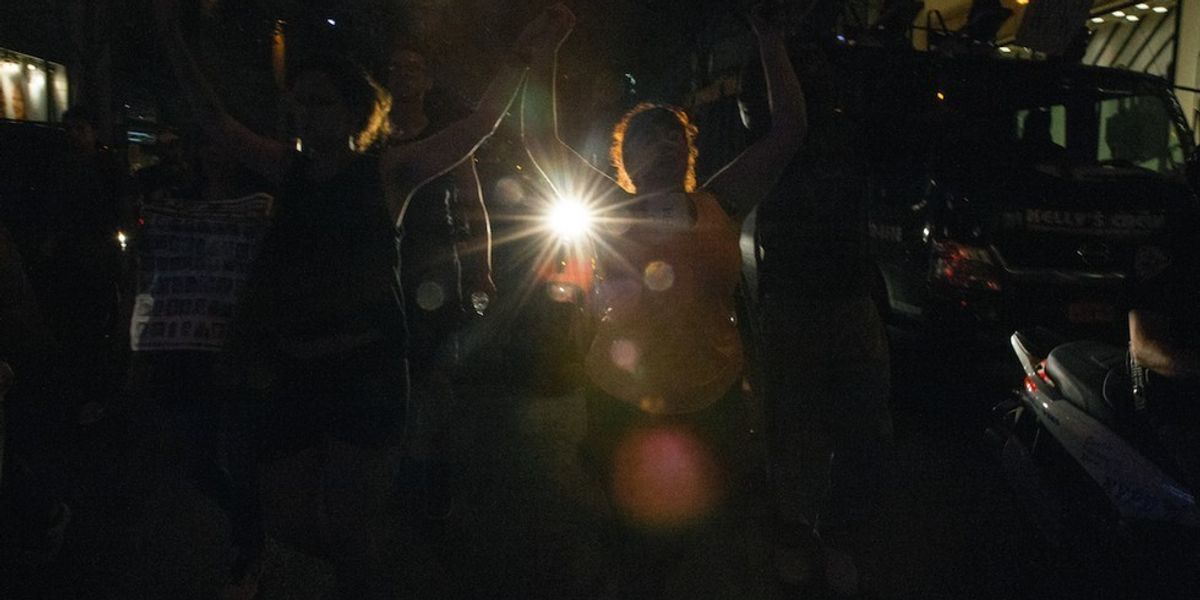 Over the weekend, thousands of Black Lives Matters protestors turned out in the streets of Baton Rogue, Louisiana -- where Alton Sterling was killed last week -- to rally against an outbreak of nationwide police violence. Amongst these protestors, over 100 people were arrested after forming a blockade on Airline Highway (which is right in front of BRPD headquarters), which is where freelance photographer Jonathan Bachman captured an incredible photo that's gone viral.

Depicting a peaceful protester in a long, billowing sundress as she is confronted and arrested by two police officers in full riot gear, it's a powerful image that many thought symbolized the thrust of the protests thusfar, in the sense that the officers look more afraid than her than she is of them.

All that armor and weapons and they still look like they're more afraid of her than she is of them #LeshiaEvans pic.twitter.com/h0LUCqBiWk
— Laureen (@laureenm01) July 11, 2016

Beautiful. Defiant. More powerful than her oppressors. She is the living, breathing statue of liberty. #LeshiaEvans pic.twitter.com/9J71uBxBXK
— CQ (@coketweet) July 11, 2016

this protestor in Baton Rouge looks like she's about to unleash her superpower of calm upon the forces of darkness pic.twitter.com/uakgQlQid6
— Fatima Al Qadiri (@FatimaAlQadiri) July 10, 2016

According to the NY Daily News, her name is reportedly Ieshia L. Evans, a 35-year-old mother and nurse, who was apparently released from police custody last night and is currently recovering from the ordeal. However, you can still support other Baton Rogue protesters by contributing to a bail fund set up for those arrested.