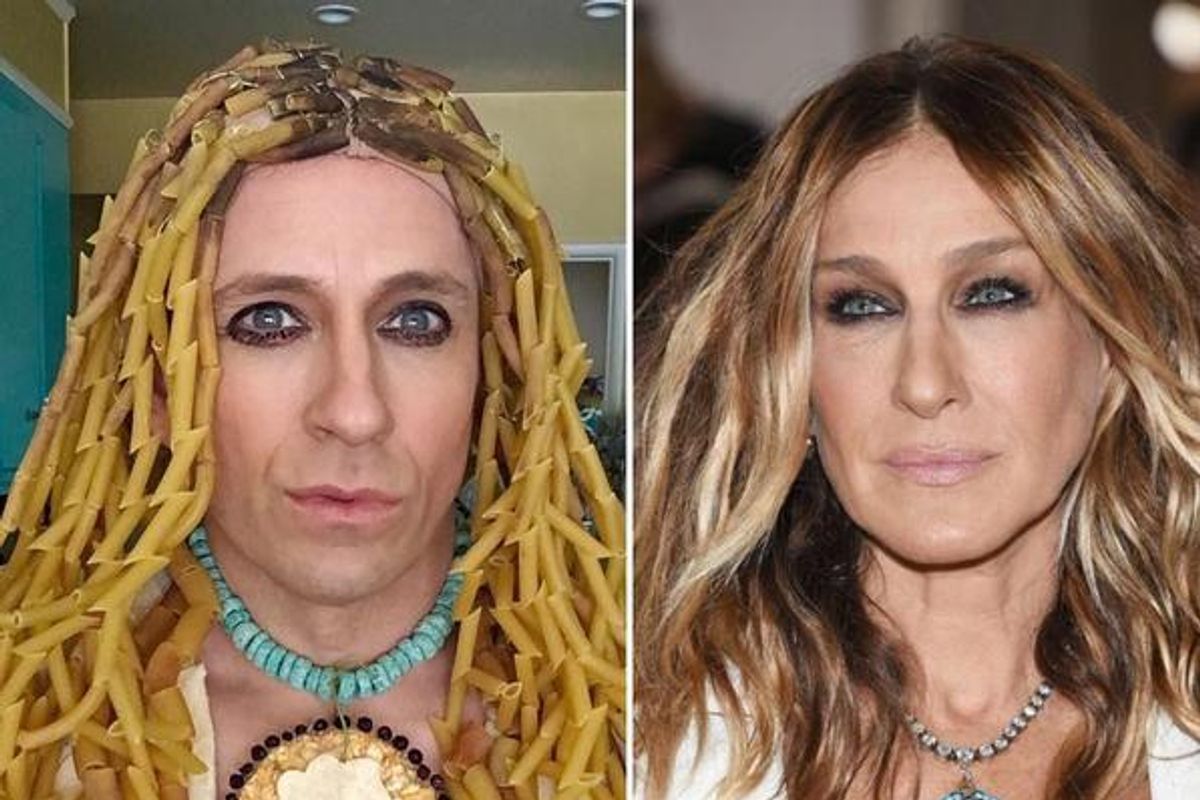 ...best known for his memorable stint on the legendary Buffy the Vampire Slayer...

...has been putting in the A+ on his Instagram as of late, recreating outfits at Met Ball, Cannes, and even reenacting movie billboards, using his #LenkLewkForLess approach.

Aka household appliances, tin cans of Altoids, garden hoses, MAXI PADS...anything and everything; paired with his hilarious captions, often satirizing the absurd cult of celebrity and sexism in film and television.

Speaking of iconic, another Internet force, João Paulo , was also recreating Met Ball lewks on his own accord..with trash; this is a MOVEMENT.

Here is a smattering:

ᴛᴏᴍ ʟᴇɴᴋ on Instagram: “#LenkLewkForLess presents #mebeforeyoumovie. Hmmm here's my pitch: 2 strangers try to go through a doorway at the same time. After you.…”

ᴛᴏᴍ ʟᴇɴᴋ on Instagram: “CEEP it CASJUAL at CANNES. This 20 minute challenge was a cinch! Mascara on an old wig: $FREE from the wig box. Folded up T-shirt: $FREE…”

Mascara on an old wig...slay me.

ᴛᴏᴍ ʟᴇɴᴋ on Instagram: “Happy belated Mother's Day. Today was a 20 minute challenge! Hollywood studios could save millions by getting the #lenklewkforless! 2 wigs,…”

Mr. Lenk also took on some Met Ball lewks, if you want to travel back to an ancient time of two weeks ago.

ᴛᴏᴍ ʟᴇɴᴋ on Instagram: “Get the @katyperry LEWK FOR LESS. Everything in the junk drawer necklace: $Free. @howtogetawaywithmurder crew t-shirt gifted from…”

KT PERRY, QUEEN OF THE DAMNED.

ᴛᴏᴍ ʟᴇɴᴋ on Instagram: “LENK LEWKS FOR LESS is the only place to shop for robo-body-armor. Why go to the HAUS of GIVENCHY when you can just come to the kitchen at…”

ᴛᴏᴍ ʟᴇɴᴋ on Instagram: “MORE HAUS OF LENK LEWKS FOR LESS. It's like Ross Dress for Less, but like way less. Hobo vs. Boho. You decide. @metmuseum #metgala2016…”