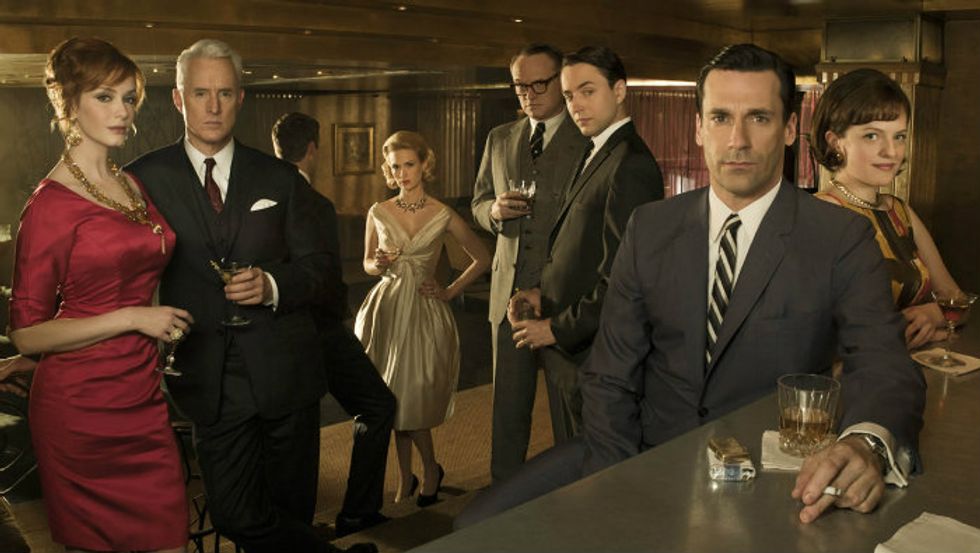 Things You Should Buy From the Mad Men Auction

by Eric Thurm
PAPERMAG
Can you believe it's only been two months since Mad Men ended? Sometimes, it feels like the heady days of May, when we were wondering what was up with that waitress, were just yesterday. Far more often, it feels like they were a lifetime ago, caught in a distant haze like those early episodes of the show where everyone was smoking a lot to prove a point about how weird it was that mass public smoking used to be a thing.

Thankfully, you can relive those wonderful times by buying one of the props from the set through an official ScreenBid auction. The collection, which goes on sale tomorrow afternoon, includes mostly clothing from the final season -- which means it's all relatively moddish and '70s, but there's still a vast array of choices for the obsessed fan looking for a piece of the action (over 1,300 pieces!). Some of these are horrible (if you are thinking about buying a fedora, heaven have mercy on your soul), but others are actually pretty great, and would make a good addition to any collectible-heavy wardrobe. Here are our picks for the best of the best.


Don's Denim Jacket
This item from the series finale is so unassuming, unofficial Mad Men fashion writers Tom & Lorenzo spend a decent chunk of their finale writeup discussing how weird it is that Don is wearing denim, and how modern it is (along with everything else he wears during "Person to Person"). If you're planning on actually wearing your Mad Men swag for some reason and don't want to stick out like a sore thumb (or mowed foot), this might be the right call.

Pete's Scarf
Fall is coming -- sorry, everyone, but it is. And if you want to be prepared, you want want to get a classy, understated scarf that fits into the high end of the Pete Campbell wardrobe. Look: Pete is the best character on the show, but I acknowledge that some of you harbor some slight distaste for King Campbell. Sorry, haters.


Bert Cooper's Robe
Not only does this allow you to slip into the unbelievable comfort of Bertram Cooper, it's also the specific piece of clothing he's wearing when he watches the moon landing in "Waterloo," a.k.a. right before he dies -- so make of that what you will. (It's not his outfit during the stellar hallucinatory dance scene at the end of the episode, but the robe still sounds kinda awesome to me.)

Betty's Sunglasses
There isn't much in the way of women's clothing here (maybe it's all been sold already?), but this is a pretty fantastic summer accessory. Use these sunglasses when you're out at the beach, staring with condescension at the mortals who dare share your space, to give you the unfeeling cool and secret emotional center of Betty Draper, the original Trap Queen.


Sally's Pool Bag
Complete your Draper women accessorizing with Sally's pool bag, which would like delightfully out-of-place at the beach. Are you the coolest, most disaffected, secretly saddest and also prematurely wisest girl in your class? Get with the Sally Draper program (but be warned: the program includes Glen Bishop).

Harry's Blood-Spattered Outfit
Ah, finally a real episode-specific classic. This is relatively unassuming clothing (which, if you think about the monstrosities Harry Crane started wearing as the series went on, is maybe a good thing), but this outfit has the distinction of appearing in the infamous scene where that dude gets his foot run over by a lawnmower -- one of the rare moments of bizarre, surprise violence that would have characterized a different version of the show. You might think this is the most ridiculously awesome piece of Mad Men clothing, but...