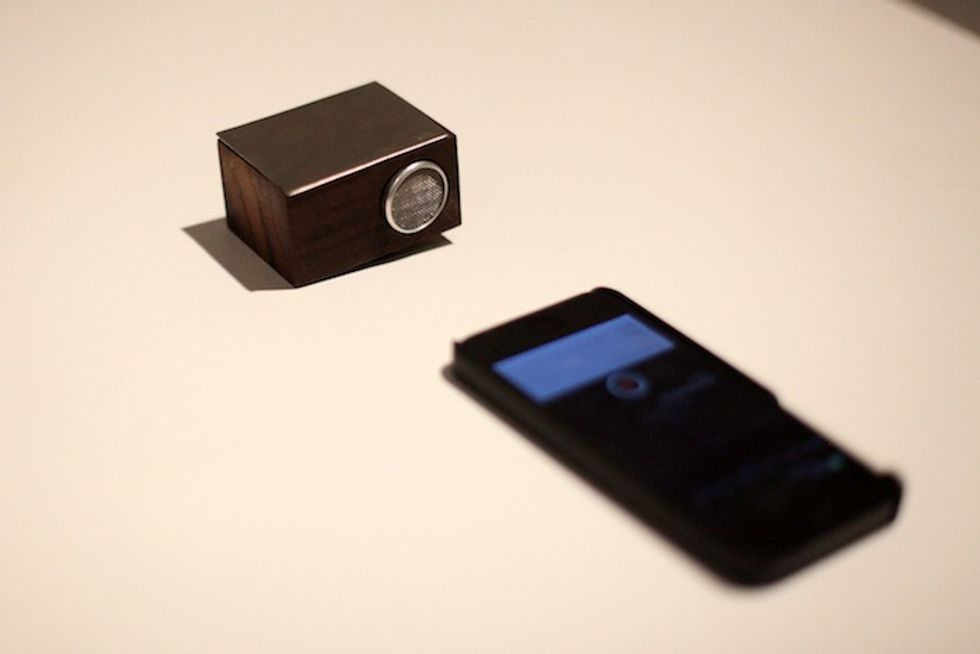 These Artists Are Creating Technology That Won't Suck Your Soul

by Kate Messinger / photos by Aviva Rowley
PAPERMAG
Chloe Vareldi and Atul Varma's Minicade
For those of us who spend most of our lives working, communicating, dating, reading and doing things with the help of screens and devices, technology can feel like both a godsend and a massive soul suck. But last night, a bunch of creators, techies, artists and regular people got the chance to experience a more humanizing side to technology at the opening of Eyebeam's 2015 art and technology showcase. "The projects that we support and engage with are constantly critically analyzing technology," says Peter Kaiser, the communications director of Eyebeam, which was established in 1997 and supports technology-focused artists with residencies and fellowships. The showcase features work created by the non-profit's 2014 residents. This year, many of the most interesting works explored physical ways of interacting with technology, bringing us beyond the loneliness of our gadgets with games, dancing, and even a device to force you into real conversation without your phone.

When we entered the Eyebeam showcase space at 111 Front Street, one thing immediately stood out against the installations and screens: a live dancer. Nancy Nowacek, a performance artist who explores the relationship between bodies and spaces, was coaching a participant as they acted out directions written on large index cards. One command was "you are an older man in coveralls turning a slow somersault backwards down a flight of stairs. You are not falling." The movements appeared similar to illustrations on a poster on the wall, which showed the wide range of bodies in motion from Nowacek's open-source library of human figures, created with Google's SketchUp Warehouse.

A piece by Nancy Nowacek
By using the public to create these positions, Nowacek explained that she's trying to integrate images of "real people" into the technology and design process. "The body has become an almost useless part of technology" she said, "I'm trying to find ways to value it." This disconnect between real bodies and design is apparent in something like an architectural sketch, where figures pictured look more like confused Sims characters than real humans in a space. Nowacek's project put us at the core of architecture and design, and invited fair visitors to act out different movement prompts. These gestures would potentially be used by young architects in their designs, and if nothing else, gave us an excuse to dance again.

Close by, the colorful Minicade designed by artist/programmer duo Chloe Varelidi and Atul Varma sparked our inner mallrat arcade fiend. Using graphics fit for the emoji generation, a suspended animÃ© style gaming console and a ton of cute stickers, Minicade invited people to play short games like 'Eat the Marshmallow' and 'Don't Step on the Poo!,' then personalize those games with an easy drag and drop HTML menu. It's simple to collaborate with others on a game, sending the link back and forth and publishing it for others to play, but it was also a quick way to learn code.

Allison Burtch's cellphone mic jammer
But not all of the art was concerned with fun and games. At the far end of the gallery, programmer and artist Allison Burtch demonstrated how a tiny box can cut out cellphone frequency, suddenly giving real silence and privacy in a world of constant communication. "Every part of us is now data, and it's being extracted for profit," Burtch said as she demonstrated how the device made the wavering lines of an iPhone's voice recording app go flat when placed in front of the box. Like Burtch's recent Log Jammer project, a frequency jammmer that disrupts all cellphone voice communication and is disguised as a log to hide in nature, the cell mic jammer gives privacy and anonymity to conversations that might accidentally become recorded or overheard. "I look at privacy issues as the gentrification of our souls," Burtch explained, claiming that this device is a hardware solution to a software problem. It's a way to know that you are really alone, and can choose to stay alone for those rare human interactions when you don't need -- or want -- your cell phone.

While it's unlikely that any of these projects will ever see real-life application, their value comes from showing us that humanity in technology is not too far gone -- as long as we're willing to search for it.

The Eyebeam 2015 Art and Technology Showcase will be on view from January 30th-February 21st in Gallery 216 at 111 Front Street, Brooklyn.
You May Also Like
Famous People