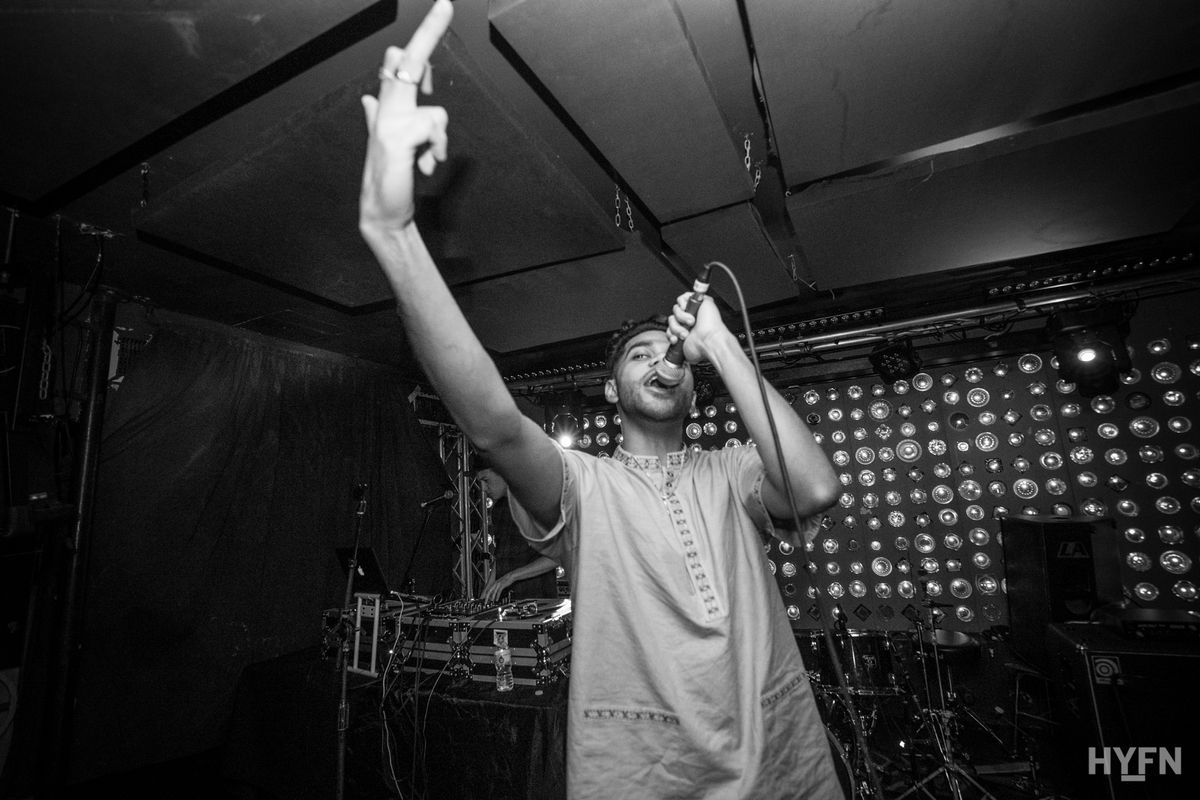 Salima Koroma's documentary "Bad Rap" premiered last week at the Tribeca film festival. In the film's 81 minutes, Koroma's lens is focused on four East Asian-American rappers ranging in style from the quirky rap of Awkwafina to the practiced battle-rap of MC Dumbfoundead. In an interview with Vice, Koroma talked about navigating an entrenched genre landscape where loyal fans of rap and hip-hop were not welcoming to non-Black musicians. "You have the people who are sick and tired of hip-hop being appropriated, who are like, 'Fuck these Asians. I don't care if you're good or not, this is not your shit,'" she said.

While her film's lineup didn't include any South Asian rappers, a similar sentiment surrounds them—brown rappers are seen as entering a space that's not theirs.

"It's a balance, if you're going to take from something make sure you give back," Bengali-American rapper Anik Khan said to me at a dinner in Court Square. "If you're going to monetize someone else's oppression…you need to give back."

"I had to earn my place. I had to rap really well. I had to do my homework—I had to memorize Nas records before I even tried to rap something but that's because I come from that shit. I had OGs telling me 'you can't be rapping if you've never heard Illmatic. Who the fuck do you think you are?' That was my environment."

Khan was born in Dhaka and grew up in a one-bedroom apartment he shared with his three sisters and parents in pre-gentrified Astoria. His father was a freedom fighter in Bangladesh before he moved the family to New York. Here he's a taxi driver, something Khan raps about a lot, making allusions to bringing his father's "ride right back."

Asians on the whole inhabit a rocky middle ground between Black and White people in America. The Black struggle, from which rap originates and finds most of its themes, is foreign to Asian-Americans and yet not completely alien. While many of us live below the poverty line, many of us also live high above it. In February, Asian protesters found themselves having to explain why they were supporting Peter Liang, the Chinese-American cop who shot and killed Akai Gurley, an unarmed black man—it was at this odd crossroads that virulent anti-blackness within the immigrant Asian community was clear, but so too was the pain of anti-Asian racism.

South Asians, specifically, are the victims of Islamophobia and racial profiling as they are simultaneously visible as doctors and engineers. Add to this the fact that there are many different immigrant groups within the South Asian-American community, many of which aren't represented by mainstream media or even acknowledged by the influential North Indian Hindu population. This complex immigrant identity is a difficult one to navigate for many second-generation kids who feel equally distanced from their white peers and from the Motherland. Brown rappers, who rhyme over Bollywood tracks and invoke images of drug-use and struggle, seem to bridge the gaps between South Asian and American cultures. They give a voice to this generation caught between 9/11 and Ivy League schools.

"[South Asians] never had an idol or a face in mainstream American media. When my sister watched JLO, who was very reserved and pretty, who's my sister going to relate to the most? Her. She's the closest thing that looks like her, came up like an immigrant like her. When I was young I always wanted to be Nas," Khan said. "He's from Queens, he's poetic, he's intelligent, his name was Nasir so I thought he was Muslim. I was like 'yo, I want to be you' because I never had anybody anywhere close to me."

Looking around now, Khan isn't the only brown rapper in the game. In fact, he's fairly new to a genre that's been opened up by people like M.I.A. and Himanshu Suri, also known as Heems. But while their success has opened doors, when they have failed to grasp the politics of their position in the rap game, they have made it more difficult for rappers like Khan to be accepted.

In December 2014, Heems came under fire for tweeting the lyrics to a song by SpaceGhostPurrp that included the N-word. While other South Asians on Twitter were the first to raise an issue with his inclusion and choice not to censor the word, black tweeters also got involved, both castigating and defending his use of it. This incident was compounded by his usage of the N-word again at a show in London around the same time and for which he was upbraided by college students at a lecture he gave.

Even for those South Asian rappers who stay on the right side of the N-word, appropriation of an entire black art form and encroachment on black issues hangs over their heads. M.I.A., the brown rapper who "made it," has also had multiple run-ins with the Twitterati. Her most recent misstep was criticizing Black Lives Matter in an interview with ES Magazine as being too limited in scope. "Is Beyoncé or Kendrick Lamar going to say Muslim Lives Matter? Or Syrian Lives Matter? Or this kid in Pakistan matters? That's a more interesting question," she said. Her comments, various people tweeted, detracted from Black Lives Matter while being hypocritical since her entire career is based on borrowing from black culture. She may have been trying to amplify brown voices, but she nearly forced an #AllLivesMatter comparison in doing so. Brown rappers, inherently, have a fine line to walk in how to balance their use of black culture and their personal brand development.

Khan works hard to make sure he's not encroaching on the territory of black artists. Early in his career, he said, he used the N-word often in his music, just like he would do in his neighborhood with his friends. That stopped when someone pointed out that the word had a longer history and larger importance than he could understand.

"Before I'd be very closed-minded—I'd be like 'what's she talking about?' I'm colored, I went through this, and dadda dadda dadda. But I will never know what it feels like to be a black man in this country. Point. Blank. Period," he said, banging his fist on the table. "I might know what it's like to be a colored man and we might have a lot of similarities but by the end of the day my people weren't shipped here, they were shipped to the West Indies."

For Khan, his music is tied to his low-income, immigrant identity. He weaves Muslim prayers in his lyrics and references Ramadan and his girl in equal measure. His track "Gina Marie" is named after his old apartment building in Astoria. The lyrics "seems like we came from a long way from home, skin's like concrete, heart's made of stone" could describe any of the old buildings in New York that have housed generations of immigrants, and as the last song on his EP "I Don't Know Yet" it brings his story back to its beginnings.

While he raps about speaking for "the culture," at the core of Khan's music is a certain level of necessity. If music doesn't work out for him, he told me, he's back to a life of blue-collar work.