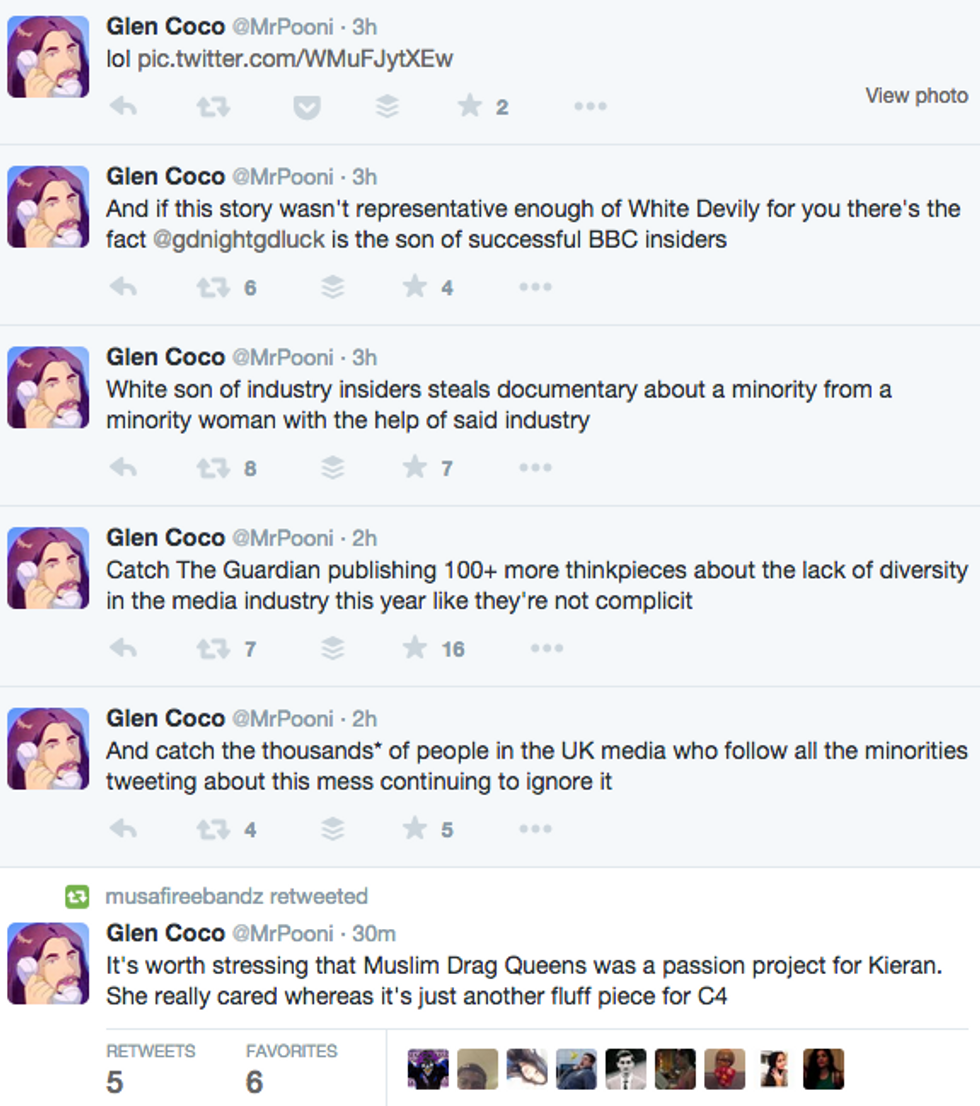 by Sandra Song
PAPERMAG
[Update 07/31/15,10:40 a.m.: Yates has written an excellent response to this whole mess, now with extra backstory and rationale that definitively backs up the assertion that this film wouldn't exist without her. Well worth a read/thorough think.]
British journalist Kieran Yates recently made an excellent short film for The Guardian about Muslim drag queens, aptly called Muslim Drag Queens, and it's quite the tugger of heartstrings.
Focusing on a Pakistani asylum-seeker (and devout Muslim) named Ali, Muslim Drag Queens follows him in the weeks leading up to his drag debut as he preps his routine, perfects his face and comes to the realization that he can still be misunderstood in London.
"It is a constant fear, because of other people's reactions," Ali says at one point. And it's no imaginary fear, as he and his flatmate are soon harassed by a passerby who scratches their car. "One guy was murdered downstairs, the same place," he says as they drive away. "My body's shivering. That's what you call fear."
Thankfully though, he is fueled by the knowledge that this is the kind of opportunity many LGBTQ people in Pakistan don't have, so with the help of drag mentor Asif, Ali continues to soldier on and prepare for his show, which turns out to happily be a success.
And we're glad this refreshing take on a community of color (by a woman of color!) was so well-received that mega-British broadcaster Channel 4 decided to turn the stories of Ali, Asif and everyone else into a full-on documentary. But there's just one problem -- Yates has been ousted from her own story entirely for this upcoming version, which was pitched to the network by her director Marcus Plowright, a white man who's apparently completely forgotten whose project this was in the first place.
Because instead of having a woman of color tell this story about people of color, the bigwigs at C4 HQ have decided that a group of white males with a little narrational help from noted (admittedly gay) white man, Ian McKellen, is better. K.
As Twitter personality Mr. Pooni also pointed out, the white director who, for lack of a better word, stole this idea from Yates is the son of industry insiders. Imagine that.
As a journalist, there's nothing shittier than getting your scoop, well, scooped from you, especially by someone you brought on for your passion project. Like, what the actual fuck, Marcus. And shame on you, Channel 4.
Very worrisome ethical/representational concerns aside, we're eager to see the incoming piece Yates says she will write in response to this entire incident, but until then, watch the original and signalboost the shit out of everything it represents. Check it out below.
[h/t The Guardian]
Fashion