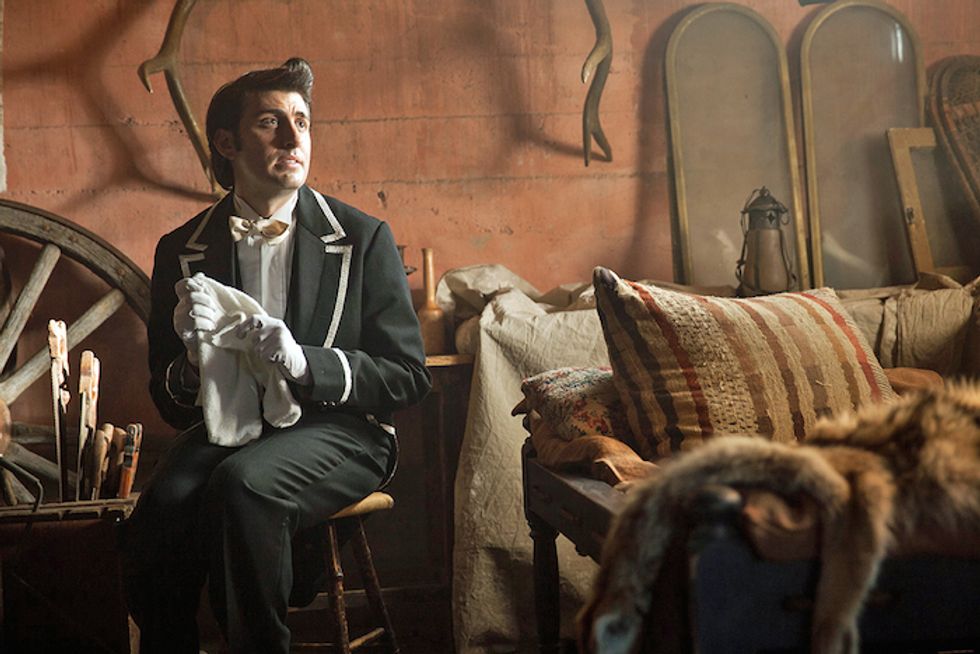 "There Is No Line": Natasha Leggero, Riki Lindhome and the Next-Level Insanity of Another Period

by James Rickman / Photography by Robyn Von Swank
PAPERMAG
There's a lot of screaming. By the end of the pilot for Another Period, after you've watched incest, excessive consumption of cocaine wine and Helen Keller getting punched in the face, the teaser for the next episode consists of a long, unbroken montage of blueblood twits losing their shit. Such is the combustive force you get when you combine present-day reality TV with Edwardian decadence and class-obsession.
Creators and stars Natasha Leggero and Riki Lindhome, who preside over a blazing cast that includes Christina Hendricks, three alumni of The State and a heartbreaking Armen Weitzman, spoke with us last week about the research -- both historical and Bravo-based -- behind the madness.
Why 1902?
Riki: 1902 was the year that cameras were invented -- like, motion picture cameras became usable. So it's the first year you could have technically had the show for real. Like, it wouldn't actually happen...
Natasha: 1902 is pretty much the beginning of this decade-long golden era in the Gilded Age where there was no income tax and basically people were living like rappers. I think they started to introduce income tax in 1912, 1915. And then everything changed. So we wanted to make sure that we had time to stay in this decade when we do subsequent seasons.
Did you go into it knowing something about this period? Or were you just starting with that Downton-meets-Kardashians idea?
Natasha: I read this book about the Gilded Age, and the woman who wrote the book kept saying that 90 percent of the wealth in all of America was in Newport, Rhode Island, at this time period. And she said you could still see all the houses there. I've always been sort of obsessed with class, and I just took a trip there one weekend by myself and explored the houses and listened to the stories of the people. I couldn't believe how these people were living. And so I told Riki about it and we both ended up going there and we did the tours and it was pretty great. People would have, like, 30 indoor servants and 40 outdoor servants. And they would just ship these people over from Ireland and for pennies. They would get their homes erected in Florence, built by whoever was the most famous architect in all of Europe, and they would collapse it, ship it over on a boat, and then reconstruct it in Newport. Nothing was enough for them.
So Natasha, when the wheels started turning on this project, what made you think you wanted Riki as your collaborator?
Natasha: We pretty much came up with the idea together. One night we were having a glass of wine, trying to brainstorm. And I had this idea for this kind of modern reality show about the stupidest people in the world -- but it took place in modern times. I also had this idea for something that was a little more dramatic that took place in 1902. Riki was like, "Why don't we combine them and do a fake reality show about the stupidest people in 1902?" And then it just sort of started to write itself.
Riki: It was hard to do a reality show about people who were dumber than people who are already on reality shows. Like, it's hard to exaggerate a modern-day reality show.
Are you guys avid viewers of any reality shows?
Riki: I think we've become more so because it's great research. I watch all of the Housewives shows. We kind of check everything out to see if anything inspires us.
That sounds like it's more for research than something you're actually obsessed with.
Riki: Oh! I'm lying. I watch those because I think they're awesome and hilarious. I watch those purely for pleasure and did so before we thought of this idea. But, other shows we watch for research... Natasha does not watch the Kardashians for pleasure. That's just me.

Armen Weitzman as Garfield
I wanted to ask you about a thread in the second episode, where the servant Garfield gets "ravished" by an upper-class lady.
Riki: It was probably inspired by the rape scene on Downton. That definitely was a dropping-off point.
Natasha: As women, we're always looking at the ways to ask, "What is the female side of everything?" And also, you know, we really did create these characters who would've done something like that. Like, I don't not believe it.
Riki: Yeah. And in this case the ravishing is not about gender; it's about class. She can do whatever she wants because she has higher status than him and he has no say. He seemed like the one male servant who she could do that to. He seems like a vulnerable sort of guy.
Natasha: Yes, not many actors can pull that off but Armen did a great job. I forgot that's the second episode [laughs].
Was there any trouble getting that joke through?
Natasha: Oddly, no. Comedy Central was so accommodating and they were so down with whatever. We had the best executives: they really got it.
And you even have a scene with the two main husbands talking about whether it's appropriate to laugh about it...
Riki: And then David Wain goes, "There is no line." And that's basically the theme for our entire show.
Jason Ritter as Frederick Bellacourt
Elsewhere in that episode, Jason Ritter has this little rant, like, "I don't do anything! I don't work!" and that seemed like a very familiar trope for a lot of Victorian novels and culture around that time.
Riki: We talk about that constantly. We're like, "How do we make this funny? Oh! He should tell the servant how bad his life is while the servant is washing his balls."
Natasha: We definitely live in a servant-less society. Back then, the servants had servants. The idea that people now are just supposed to do everything themselves is a bit absurd. The idea that a single man is supposed to clean his own house, make his own food, go to work full-time. Things just didn't used to be like that.
It's a ludicrous time we live in.
Natasha: It's a servant-less society. I can't take it!
Was there anything else about the period that really surprised you?
Natasha: Money-wise, America was inventing itself. It was still trying to find its identity. It was pulling from England a little bit. Grocery stores hadn't been invented. Women couldn't vote. Everything was just being developed as our show is happening. And capitalism -- that was basically being invented at this exact time period. Like maybe America could've gone socialist. People didn't quite know the direction yet.
Riki: Yeah. There were no antitrust laws. It was a free-for-all.
Natasha: But the thing that I love most is just seeing how people could live in this free-for-all because there was no income tax. Now we're living in a time where people have figured out how to legally break the law enough to not pay income tax. So basically, we're right back to where we started.
Last question: Natasha, is the dog on the show your dog?
Natasha: [laughs] Do I have too many pictures of my dog on Instagram? Am I in a "crazy" category?
Riki: I mean, you have to do at least one picture with all of her wigs.
Natasha: There's one woman in America who makes dog wigs and she's M.I.A. But yes. Her name's Mayor Cutie and she is my real dog. She's one of three. She's the only one I truly love, and she's extremely photogenic and just does what we tell her. So we kept writing parts for her.
Another Period premieres tonight on Comedy Central.
Natasha Leggero as Lillian Bellacourt and Riki Lindhome as Beatrice Bellacourt
You May Also Like
Beauty