Theater Bar Is Our Bar of the Week 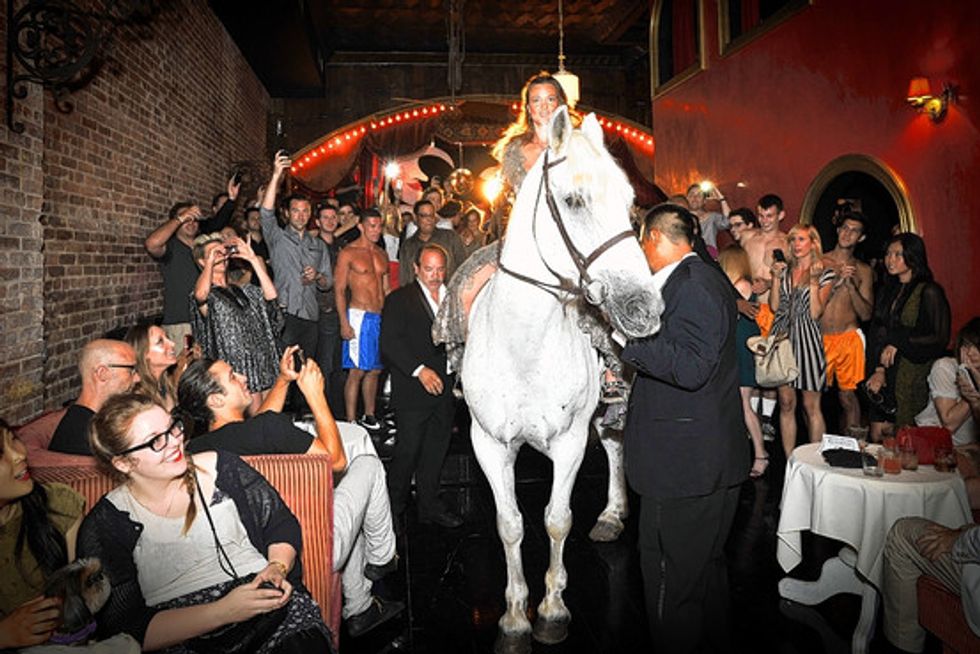 Like something out of an Artaud play, Tribeca's latest spectacle, Theater Bar, embraces the dark side of partying and banishes all bar-as-background conventions. Of course, its schtick is the stage, perfect for New York, where most everyone's personal bubble acts as an arena. This couldn't have been more true than on a recent evening at the newly opened boÃ®te. There was a tone of rising urgency, with music thrumming loudly, guests elbowing for drinks and entourages emitting dull roars at lounge tables where some had the sleepy look of opium eaters and others the crazed eyes of drama queens craving an audience. At the end of the long room, the bar, bedecked as a grand stage with crimson curtains and dramatic lighting, perches above its crushing audience and elevates the bartender from friendly neighborhood lubricator to thrilling performer with a bar spoon. It wasn't clear why there were so many thespians behind the bar that evening, or why the menu (written in four acts) contained so many allusions to vaguely defined elixirs ordered by a bewildering numerical system (Elixir No. 14 Parsley Essence), but even so, the sampled cocktails were well-mixed. One drink made with tequila, yuzu and shiso had a wasabi shiso rim that zinged just as saltily as the guy cutting in front of the small girl attempting to order it. Though it's better to just order drinks at the bar than actually sit at it, there is enough drama there to keep one entertained  -- while the occasional corseted cocktail waitress struts around flashing pale body parts, another semi-clad girl prances about on stilts in face paint. The bar is also split into two similar rooms, for a looking glass effect leaving one to wonder how all those other people suddenly appeared on the other side. No, that wasn't just your gorgeous self gazing back across -- it's your foxy Jungian shadow telling you to head downstairs, continue past the bathrooms, walk through the kitchen doors and turn right. Saunter up the stairs and you'll make a very Artaudian entrance on the other side of the looking glass where the crowd is less, the conversation quieter and the drama subdued, but surely always lurking.

Photo via the Wall Street Journal.