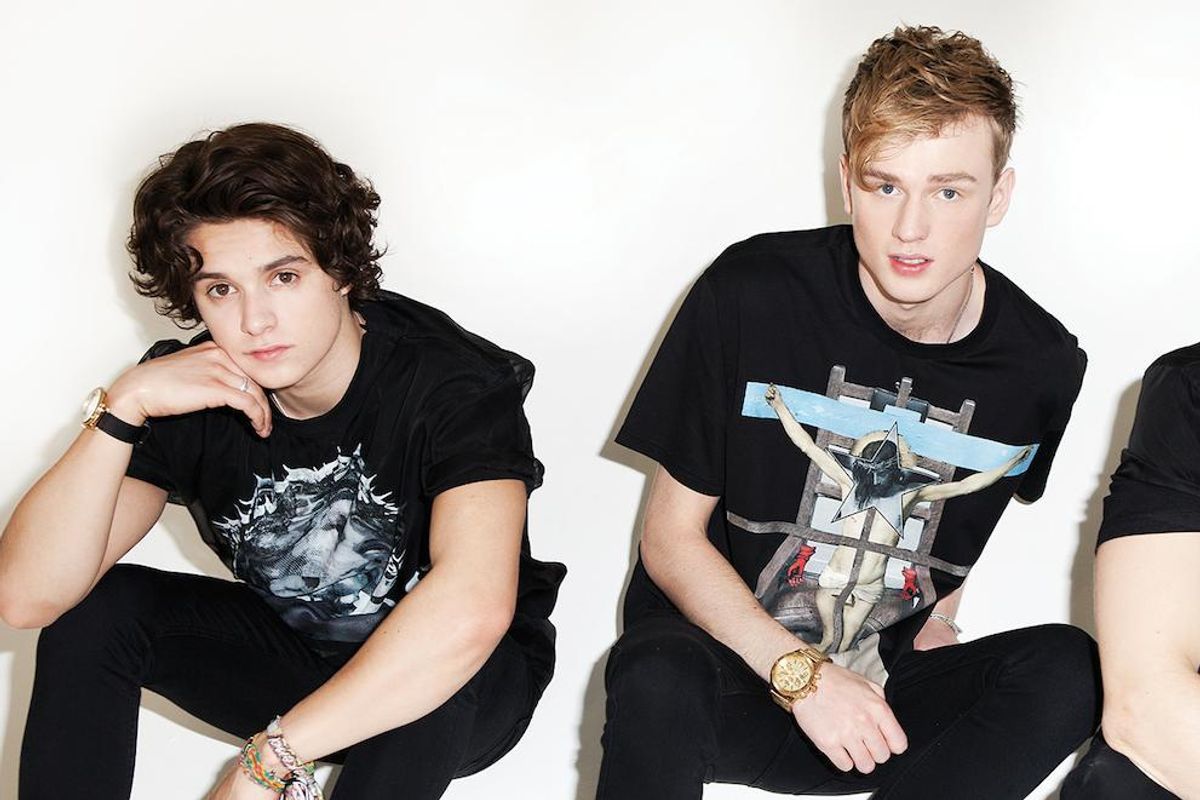 Meet the Vamps, the UK Band About to Make Their Mark Stateside

They have a global tour, get compared to One Direction and are adored by pastry-throwing obsessive fans. What's next?

James McVey (@iamjamesmcvey), the 21-year-old guitarist for UK band the Vamps (@wearethevamps), is thinking. "What's changed since we started?" he muses. He plucks at singer Brad Simpson's (@bradleywillsimpson) sweater. "Check this out," he says. Cherubic-faced Simpson lifts it up obligingly, revealing tan skin and hair on his stomach. "Brad got a snail trail," McVey smirks, pointing. "He didn't have that when we started." McVey's response is, inadvertently, making a point as much as he's fucking around -- the band has literally grown up since forming as teenagers in 2012.

McVey, Simpson (20), drummer Tristan Evans (@thevampstris, 21) and bassist Connor Ball (20, and who is absent, recovering from knee surgery) came together like any modern band -- through the power of YouTube, Facebook and mutual friends. After they initially gained attention through uploading covers on YouTube, their 2013 debut single,"Can We Dance," and 2014 album, Meet the Vamps, turned them into household names in the UK, Australia and Asia. In the two years since, the foursome has relentlessly recorded (their sophomore album, Wake Up, came out last year) and played arena shows across the globe (their own as well as supporting the likes of Taylor Swift). As their profile has grown, they've become widely regarded as a corner of a triangle completed by One Direction and 5 Seconds of Summer. This position, though enviable, has earned the group branding by the media as a "boy band," despite the fact that the Vamps write and play their own songs. 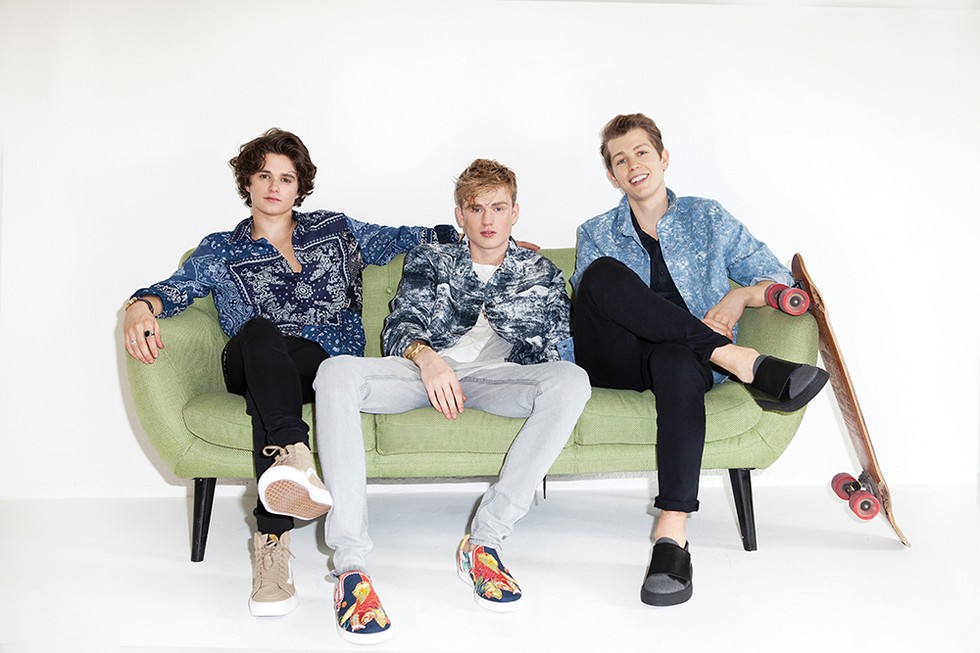 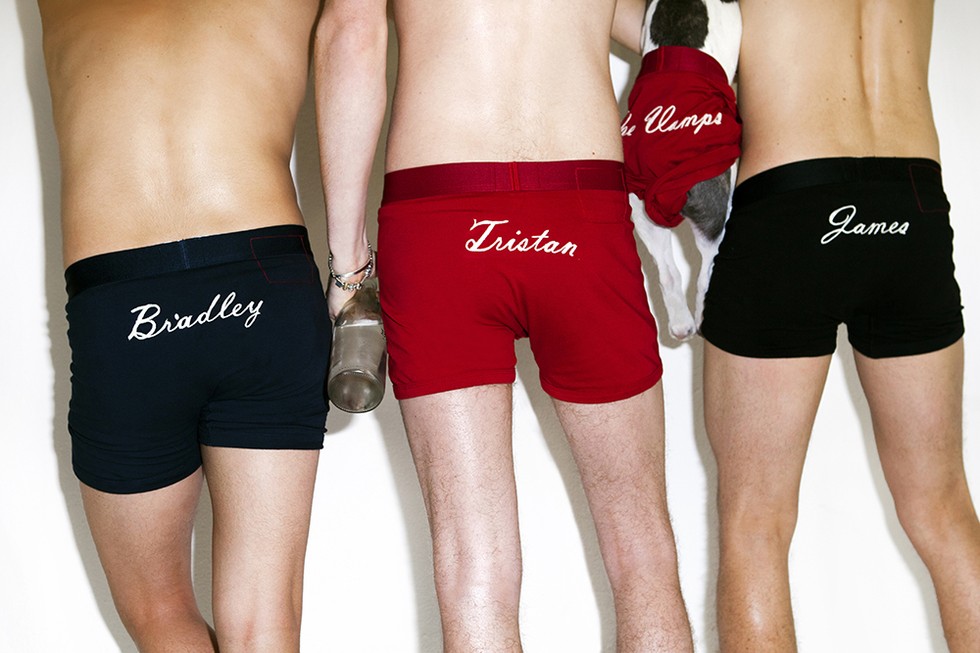 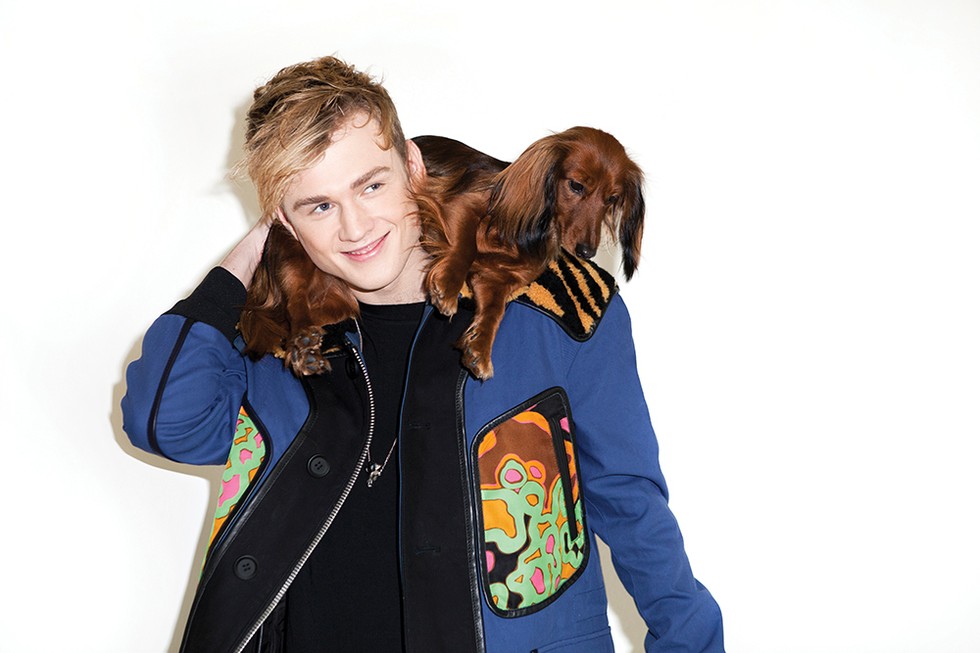 Tristan wears a top by ADYN (@adynclothing), jeans by Topman (@topman), a coat by Coach (@coach) and shoes by Vans (@vans) 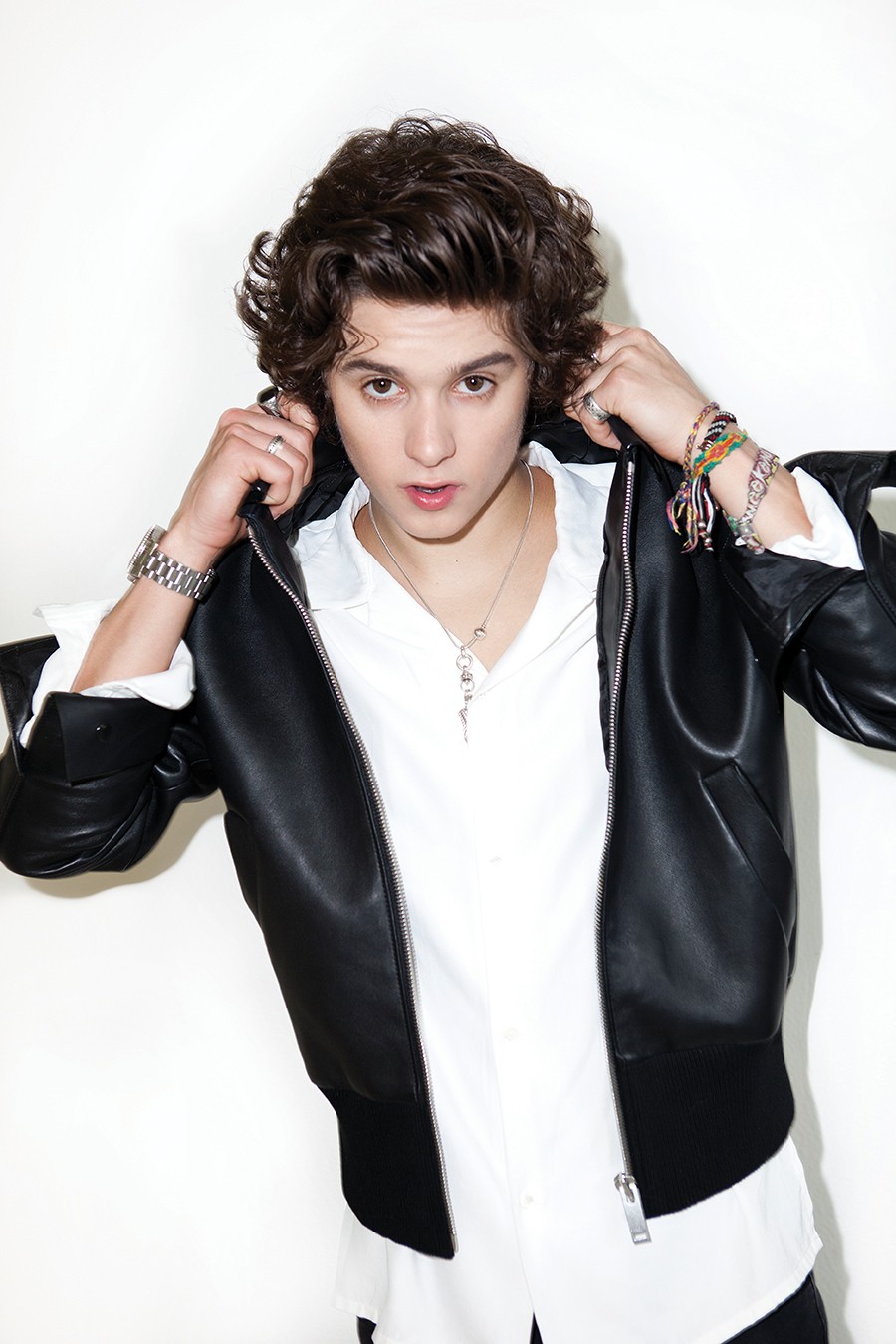 Brad wears a shirt and jacket by Sandro (@sandroparis), pants by Topman (@topman), shoes by Anthony Miles (@anthony_miles) and a watch by Gucci (@gucci) 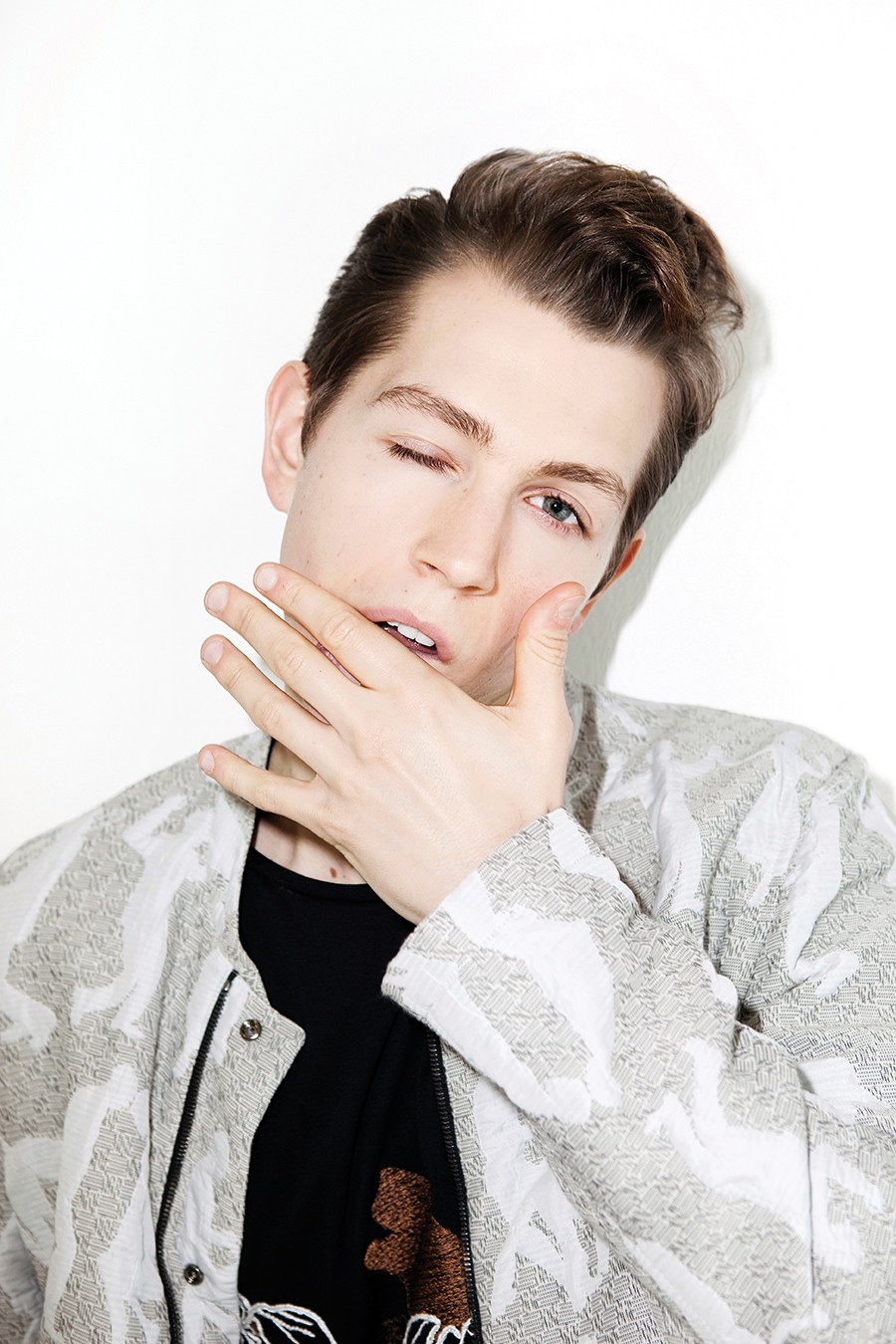 James wears a shirt and jacket by Chalayan (@chalayanstudio) 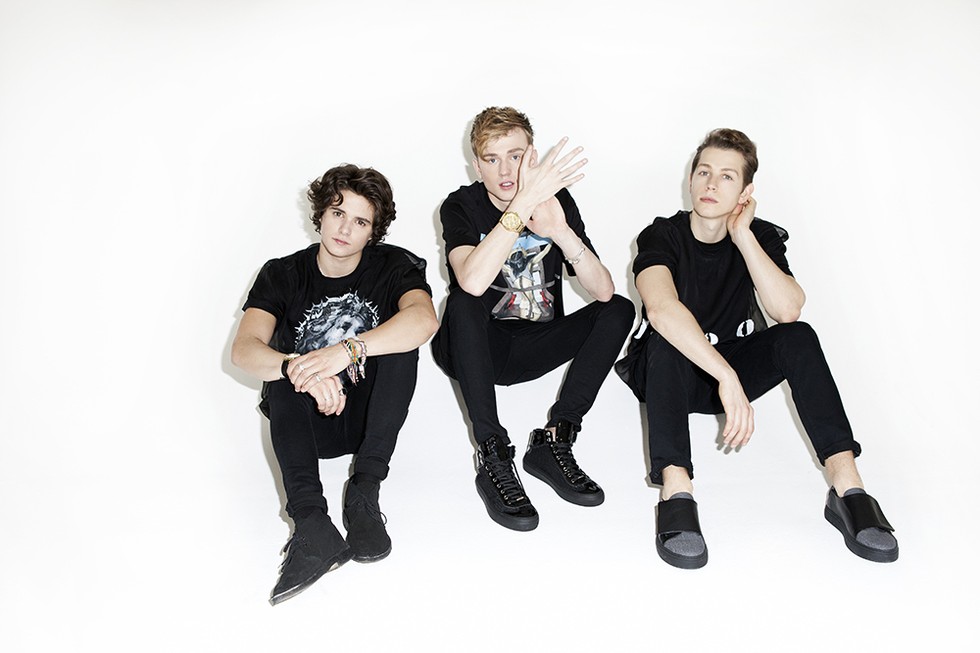 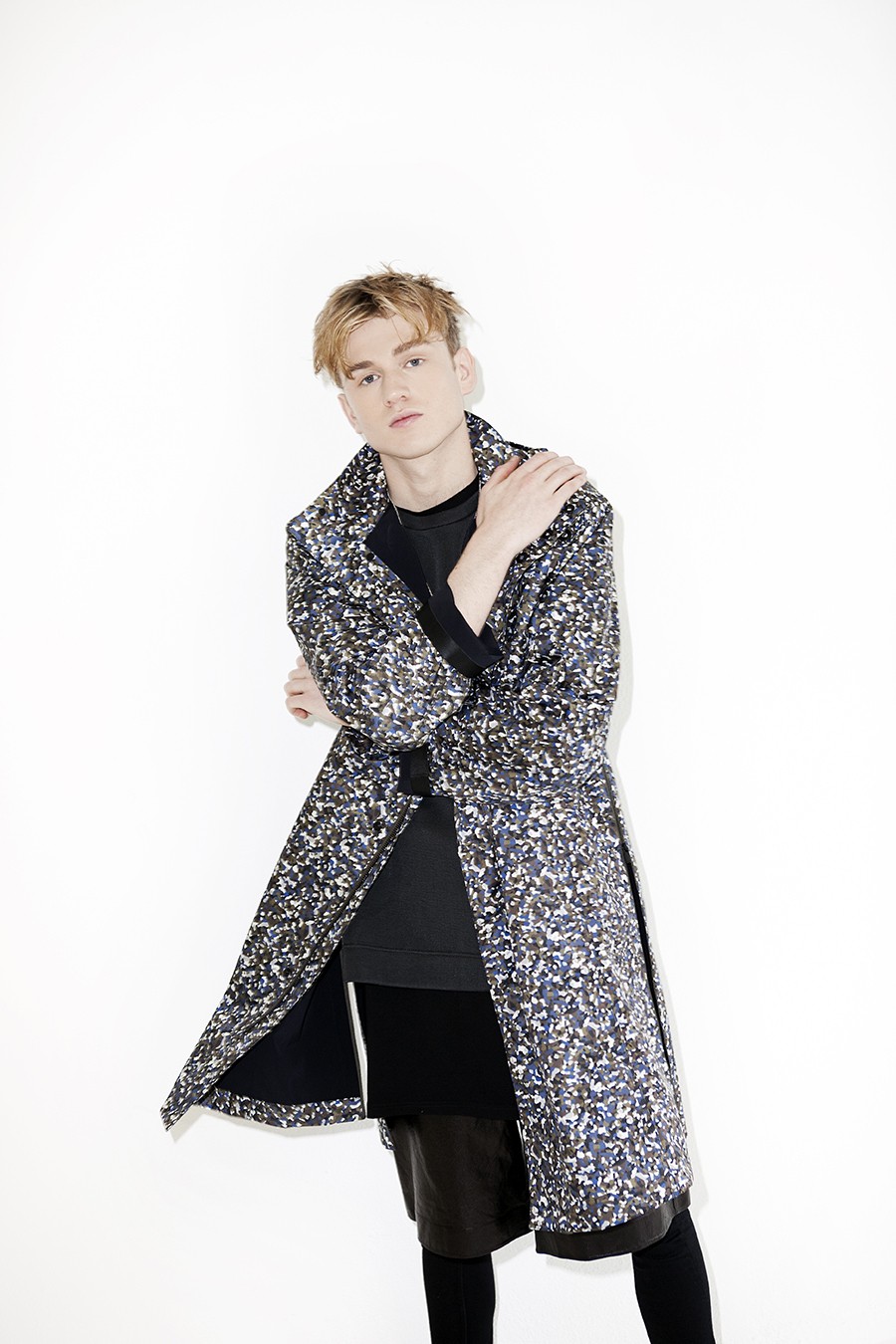 Tristan wears a top, jacket and shorts by Fendi (@fendi), jeans by Topman (@topman) and shoes by Vans (@vans) 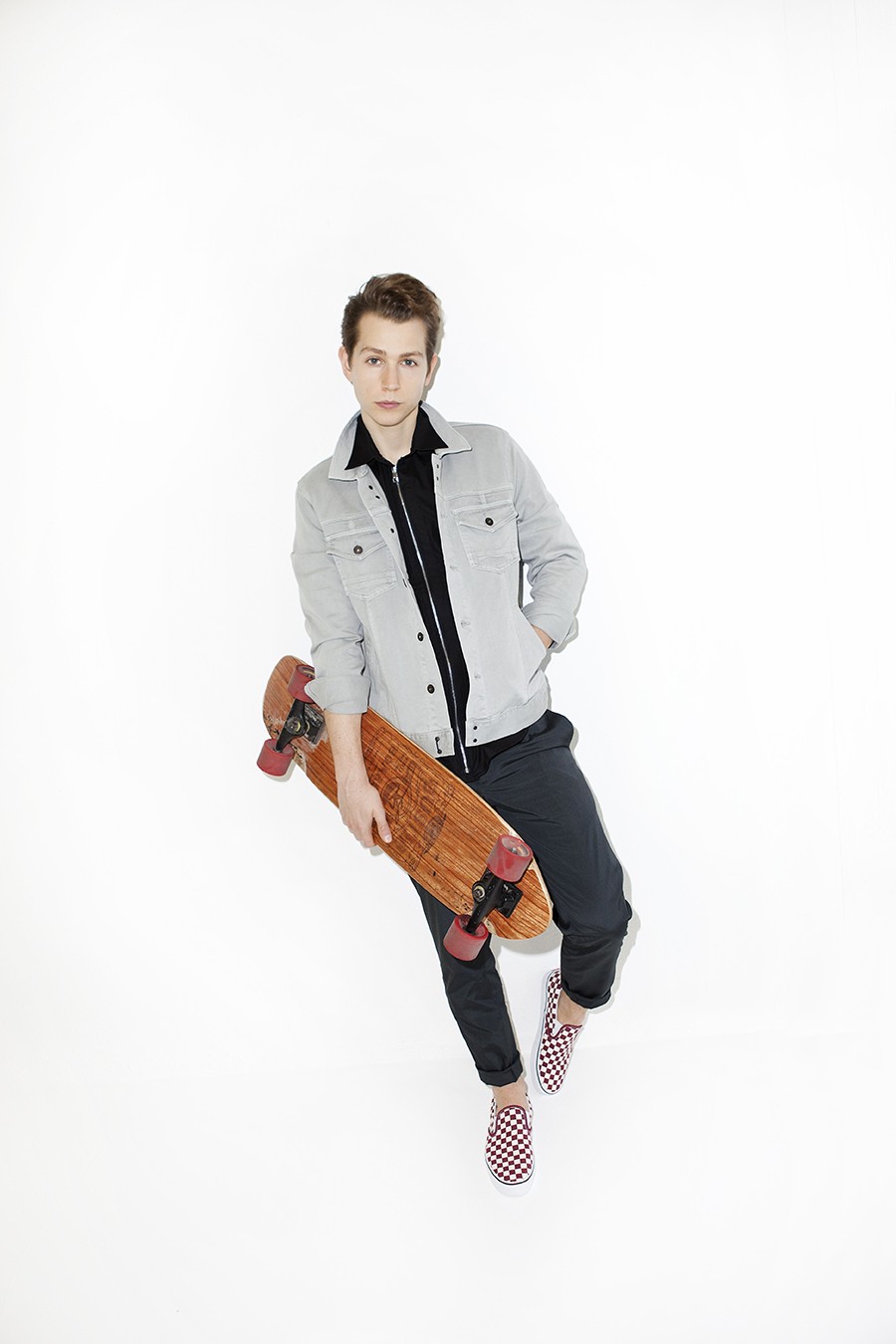 James wears a shirt by La Menta (@lamentaapparel), pants by COS (@cosstores), jacket by Paige Denim (@paigedenim) and shoes by Vans (@vans)

Simpson shrugs it off. "I don't think we've fought against it," he says, explaining that in a musical landscape dominated by electronic music and hip-hop artists, it's likely any group of young, attractive men making mainstream, guitar-heavy pop rock will face being called a "boy band." He adds, "We don't mind. In today's industry, there's a massive lack of guitars, and if a band pops along you get categorized. But if people really want to know what the Vamps are, come see a live show -- people's opinions are always altered after that."

Deft songwriters, the band often pens anthemic singles like the stadium-sized "Wake Up" or the hook-laden, banjo-jangling "Wild Heart," yet ultimately the albums are an eclectic mix of inspirations. "It's about challenging yourself. The first album was more a mix of sounds," Simpson explains. Everything from "Bruno Mars to folk-influenced ballads. The second album, Wake Up, was more coherent and linked musically. It's about experimenting, and that's the benefit of having four lads in a band with different musical tastes."

Along with beginning a third album and touring their second, the guys are expanding into mogul territory with the creation of their own label, Steady Records; they've already signed two very Vamps-esque bands, LA's the Tide and UK trio New Hope Club. "We've seen how exciting it is within a label and to see the songs develop and how the world responds," Simpson says."Hopefully we've got some knowledge to pass onto 16-year-old lads coming up." The Vamps' choice of acts flies against an industry in thrall with dance producers, but Simpson, Evans and McVey emphatically hold up their hands, laughing in attempts to deny the idea of being the saviors of young bands.

Talk instead turns to their current tour, which takes them through Europe, South America, Mexico, Canada and the US, the breaking of the latter McVey calls "a challenge, in the sheer size of it." He continues, "We were lucky enough to tour there last summer for five weeks and didn't even do half of America, so it's something we're really wanting to explore more."

With a predominantly female fanbase (some of whom have managed to track them down and lurk, shivering in the drizzle, at the studio gates), the Vamps have only appreciation for their fans' devotion and energy but laugh at some of the more outlandish gestures they witness at shows. "I got a box of Jaffa Cakes chucked at my nether regions," recalls McVey, amused at the experience of being pelted by the chocolate biscuits. "Actually, I got hit in the face by a shoe. Brad's had a shoe as well, and a bottle."

And while news of 1D's hiatus rocked the pop world last year, the Vamps show no sign of member fatigue despite a hectic schedule, which they attribute to three things: "Know your place and what you do in the band, give each other space, and don't take it too seriously," Evans says. Simpson adds: "We're lucky. It helps that we don't feel strongly about one thing that would mean we fall out over it with another member!"

They take the same level-headed approach to outside relationships. Although Evans cagily remarks that "some of us are out of relationships, some of us are in.You never know," Simpson acknowledges that "the best thing is finding someone who can deal with themselves, who has their own life going on." He adds, "Whether it's a relationship or just a coming together every so often... it's finding the right person.That's just life, isn't it? It doesn't matter what [job] you're doing."

But the big question still remains: could the Vamps be the next 1D-level band to take over? "That's big shoes to fill," Evans says lightly. For McVey, the priority is just focusing on being the Vamps. "I hope we'll be doing this for many more years. It's a shame 1D has gone, but if their fans want to listen to other music," he slowly grins, "they can listen to us if they want!"