The Value of Shock

Oh, but, as any reasonable person would, I'm just trying to determine whether half a millimeter of poop has any sort of odor. That's why my face is right up next to Tom Friedman's beloved 1992 piece, a .5mm fleck of his feces on a large white pedestal. Friedman's untitled poop piece sits next to Piero Manzoni's canonical Merda d'artista (1961), a labeled can of the artist's feces.

These are just two of the many pieces in a feces-themed-art room at the new P.S. 1 show, Into Me / Out of Me, which features art about how substances -- from excrement to weapons -- pass through the human body. Curated by Klaus Biesenbach, P.S. 1's chief curator, the show's roster of 130-plus artists is chock-full of big names, including Marina Abramovic, Matthew Barney, and Cindy Sherman. Biesenbach groups the works largely by biological function, so one room, set aside for food-themed art, contains pieces ranging from Andy Warhol's 1986 silk-screened take on da Vinci's Last Supper, to a 2001 video of anorexic-looking twin artists L.A. Raeven. Another room presents pieces about the body in decline, from Hannah Wilke's harrowing self-portraits of her last years to a clinical Damien Hirst medicine cabinet.

Signs in front of each and every room advise parental guidance, and no one under 17 is allowed into the "sex" room, where a garish Jeff Koons photo (woman, red outfit, doggy-style) competes with classic Robert Mapplethorpe photos of people getting fisted. In this room, everyone looks super-thoughtful, speaks softly, and carries small sticks. No one, absolutely no one, is turned on. Right, everyone? My date is spending a suspicious amount of time in front of the Mapplethorpes.

A lot of the works are tough to look at but my stomach really turns by the time I see the sculpture of maggot-covered skeletons by Jake and Dinos Chapman, brothers and artists who previously stirred up controversy by buying, then defacing, Goya prints. I step out in the hallway to recover, where I cross paths with a kid who can't be more than six or seven years old. He looks nonchalant. I look ready to hurl. I have been out-jaded by a cherubic second grader in sandals.

Jadedness is a crucial issue in Biesenbach's show, because Into Me / Out of Me isn't quite about what it claims to be: art that examines bodily processes. It's more often about art that tries to provoke its viewers by examining bodily processes. Biesenbach could have included equally relevant and interesting, if less shocking, themes: How do our bodies transmit knowledge? How do we process sensation? Instead, the show assembles five decades of art that would piss off Ann Coulter, compiling pieces that have historically been shockers but now hang out in the canon of funny, significant work, like Vito Acconci's Seedbed (1972), in which the artist masturbated under the floor of a gallery to the sound of visitors above.

The shock value of these "baser" bodily functions is most successful in the historical works of political protest, as with the 1960s pieces by Viennese Actionists. In particular, the Actionist videos, with their madcap, Monty Python tone, are a refreshing contrast to the more contemporary pieces, which tend either towards the frat-boy mischief of Jackass, or the somberness of a BBC documentary. On the other hand, so many canonical pieces make the entire show lean towards becoming an art-history survey course; I'd have enjoyed the surprise of encountering more young artists not yet in the canon, such as Dana Schutz, whose neon cannibal paintings, no strangers to P.S. 1, would have been appropriate in their theme but added some more youth and exuberance to the show.

My hopes were most raised by Bjork's music video for her song "Hidden Place." One of the first pieces viewers encounter, the video seems to promise that the show will deviate from gallery-bound art. If we get music videos as art, I wondered, might we also get medical illustrations? Porn? Tattoos? But "Hidden Place" turns out to be a red herring. The rest of Into Me / Out of Me stays squarely in the white cube; Biesenbach is most concerned with how famous artists have stuffed the repulsive human body into the confines of the gallery, and lived to tell the tale. 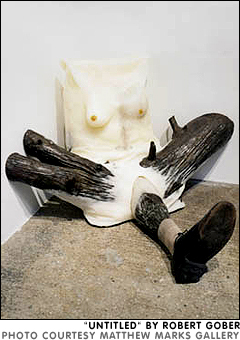 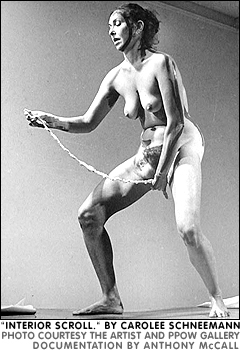