The Tony Award Nominations: We Weigh In On Who Should Win 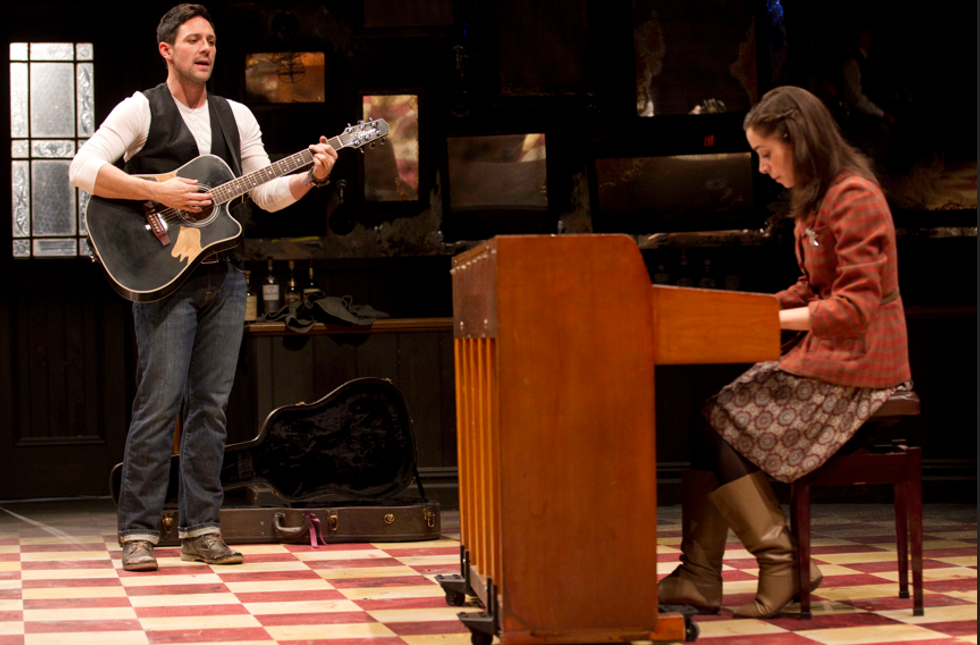 Broadway was a-buzz this morning as the 2012 Tony Award nominations were announced. The new musical Once, (pictured here) topped the nominations list with a total of 11. Here are our thoughts on who should win in the big categories. Let us know who you want to see take home a Tony in the comments below!

Nominees:
Clybourne Park
Other Desert Cities
Peter and the Starcatcher
Venus in Fur

And the winner should be: This is a tough one! We loved all of these plays. For us it's between Other Desert Cities and Clybourne Park. Desert Cities is a flawlessly put together production and a very entertaining night at the theater, but Clybourne Park makes more of a social statement and we love its underdog story about how producer Jordan Roth swooped in and saved the show from being cancelled.

Nominees:
Leap of Faith
Newsies
Nice Work If You Can Get It
Once

And the winner should be: Though we're thankful that the bloated Spider-man production was snubbed, this category is still void of any completely original work. We're going for Once, though, because it's definitely the freshest show in this rather uninspiring category of reproductions and adaptations.

BEST REVIVAL OF A PLAY

And the winner should be: These are all theatrical gems, but as far as current productions are concerned, we'd have to go with Death of a Salesman here. Not to be shallow, but we love a boy in a boxer. Especially Andrew Garfield in a boxer. Also Arthur Miller's genius script and Mike Nichols' genius direction make this a timeless and satisfying night at the theater.

BEST REVIVAL OF A MUSICAL

And the winner should be: Though we did miss Lee Remick singing "Leave You," Follies is the best. Follies, however, isn't open anymore, and people might not recall its brilliance as easily as they would for fresher shows. This opens the door for an Evita upset. We also loved Porgy and Bess but, to be honest, Norm Lewis was just too sexy as Porgy in this production -- and though it's an enjoyable show, it throws off the dynamic of the story. For reasons unknown, Jesus Christ Superstar received a nod. That production butchered two of our favorite songs: "I Don't Know How to Love Him," and "Everything's Alright." We're insulted it's nominated.

And the winner should be: We have to go with John Lithgow in this one. Shocking, because we still haven't forgiven him completely for the terrible Dirty Rotten Scoundrels, but true. We did love Philip Seymour Hoffman in Death of Salesman... but there was something off, and Brian Dennehy's portrayal of Willy Loman remains the best we've ever seen. So John, here's to you.

And the winner should be: We're torn. Nina Arianda is the most exciting thing to happen to Broadway in years, but pitting her against Stockard and Linda (Broadway legends for a reason) and Tracie Bennett (who is truly mind-scrambling as Judy Garland), it's tough. We wouldn't be mad if any of these amazing actresses took home the Tony.

And the winner should be: So remember when we said Norm was too sexy as Porgy? That doesn't mean he didn't give a great performance. Steve Kazee also was very impressive in Once and Ron Raines was just cold and desperate enough in Follies. This is a tough one, but we're going to have to go with Mr. Lewis' immense musical talent for the win.

And the winner should be: We missed Bonnie & Clyde since it was open for about a week... so we're going with Audra here. (We'd prefer Jan Maxwell to finally win one, however, since Audra has about 100 Tonys.)

And the winner should be: Jeremy Shamos gives a great performance in Clybourne Park but let's give it to Andrew Garfield. We need one movie star to win and he does a great job in Death of a Salesman. (Plus, Emma Stone is sure to look fabulous in something Lanvin, as his date.)

And the winner should be: Again, we're torn between two theater veterans, Linda Emond and Judith Light, who both gave standup performances. Special shout-out to Condola Rashad on a well-deserved first nomination! Phylicia should be proud.

And the winner should be: Josh Young was the only saving grace of Jesus Christ Superstar but we have no love for that production, so he's out. Michael Cerveris hasn't won since Assassins and he's a great asset to the Broadway community so we'll give it to him.

Nominees:
Elizabeth A. Davis, Once
Jayne Houdyshell, Follies
Judy Kaye, Nice Work If You Can Get It
Jessie Mueller, On A Clear Day You Can See Forever
Da'Vine Joy Randolph, Ghost the Musical

And the winner should be: Jessie Mueller was the only bright spot in this otherwise humdrum production of On A Clear Day You Can See Forever. We think she should win (and we can't wait to see her in Into the Woods this summer in Central Park).