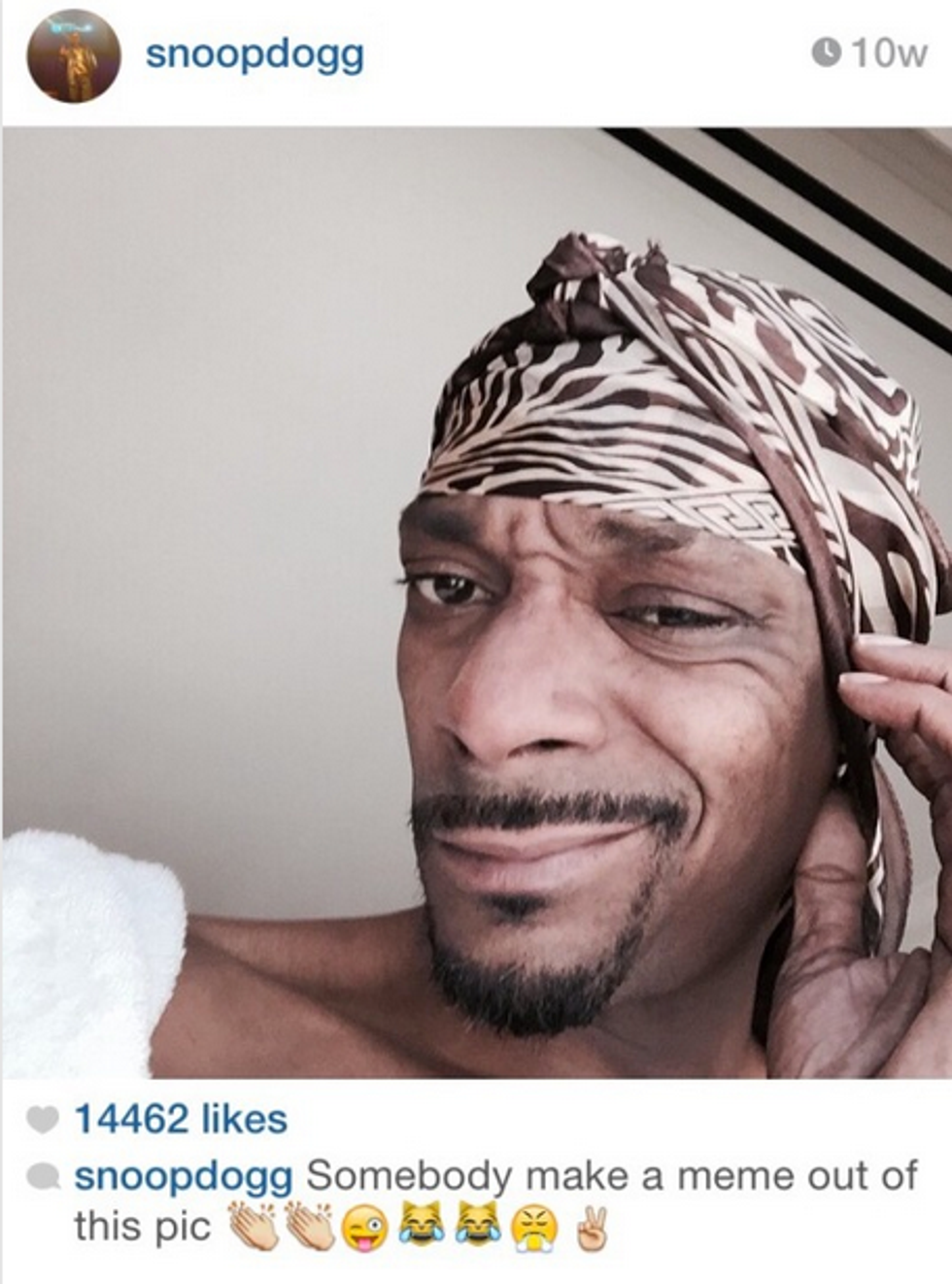 The Thirst Is Real: Celebrity Desperation In the Age of Social Media

by Paper
PAPERMAG
On the one hand, it's pretty boring when a celebrity so obviously pays an assistant to manage their social media accounts but on the other, there's a big reason why they don't have control over the passwords: they're thirsty. Look, we get it. A big part of social media -- especially if you're a celebrity -- is about self promotion but oh man how things can quickly go awry. Below, we've rounded up the thirstiest ten in the bunch. It's worth mentioning that though we might roll our eyes when we come across their feeds, we're also in awe that they clearly don't give a fuck about social media etiquette. (Except Donald Trump because fuck Donald Trump.)
Snoop Dogg
Snoop Dogg is by far the worst, most tedious celebrity Instagrammer hands down. On February 1st, he posted 63 times. SIXTY THREE. Granted, it was the Super Bowl, and Snoop lives and dies for football, but that is borderline pathological. Some of his posts are to promote various events and projects, which adds a few thirst points, but his thirstiest offense comes from his constant bad selfies that he hopes will turn into memes. Snoop's tragic  misunderstanding of how memes work has even become a meme itself. Weep for him.

Iggy Azalea
Previously full of politically incorrect -- if not deeply racist -- tweets, her feed, when it's not being used to squabble with Azealia Banks, is now mostly made up of multi-tweet long missives about everything from God and race to the decline of media and authenticity; it's like she's thirsting for one big soapbox to try to convince you that's she's actually a good person and a good rapper.

Rick Ross
Not long ago, Rick Ross' Twitter was near and dear to our hearts. We're big fans of his use of that little flame emoji, but now we're pretty sure that his Twitter feed has highest product placement to overall tweet ratio of all time. If he's not trying to get us to go grab lunch at one of his Wingstop franchises, he's promoting some brand of rosÃ©, constantly. And in some cases, he's so lazy about it that he just screenshots an instagrammed post from iPhone and posts that to Twitter. Like, the least you -- or your appointed, underpaid social media intern -- can do is work as hard as your thirst.

Naya Rivera
You're familiar with GOOP, what about NayaRivera.com? Like Gwyneth Paltrow's much maligned site, NayaRivera.com offers beauty tips, tricks, and serves as a general State of the Union for Naya Rivera's life. All that would be fine (avoiding self-promoting celebrity websites is easy enough), but damn, Naya Rivera is THIRSTY. Almost every other tweet that she writes is to promote this blog filled with mediocre beauty and fashion advice. At least GOOP is creative -- if anything, vaginal steaming is honestly a practice we had never heard of before. We have, however, heard that NARS bronzer is great for "contouring on-the-go." Thanks for the tips Naya, but no thanks. You are not the guru we're looking for.

James Franco
Franco has more than mastered his meta-thirst-as-larger-commentary-on-celebrity-obsession -- the man did a 2015 selfie calendar for us, after-all --  and it's time for a refresh, guy. We suggest duplicating all of Martha Stewart's confounding twitpics. Including this one.

Courtney Love
Courtney is one of the biggest offenders of the name-dropping photo as well as re-tweeting seemingly any complimentary press and praise from fans, which is thirst defined. Still, we love her for posting tweets like the one below. It's very tame in the grand-scheme of CourtneyTwitter, but amusing nonetheless:

Omg @marilynmanson all this time thought u're gay. Of course I'll fuck u. Im free Fri from 1:15 to 1:18 gives us plenty time 4 a smoke too x