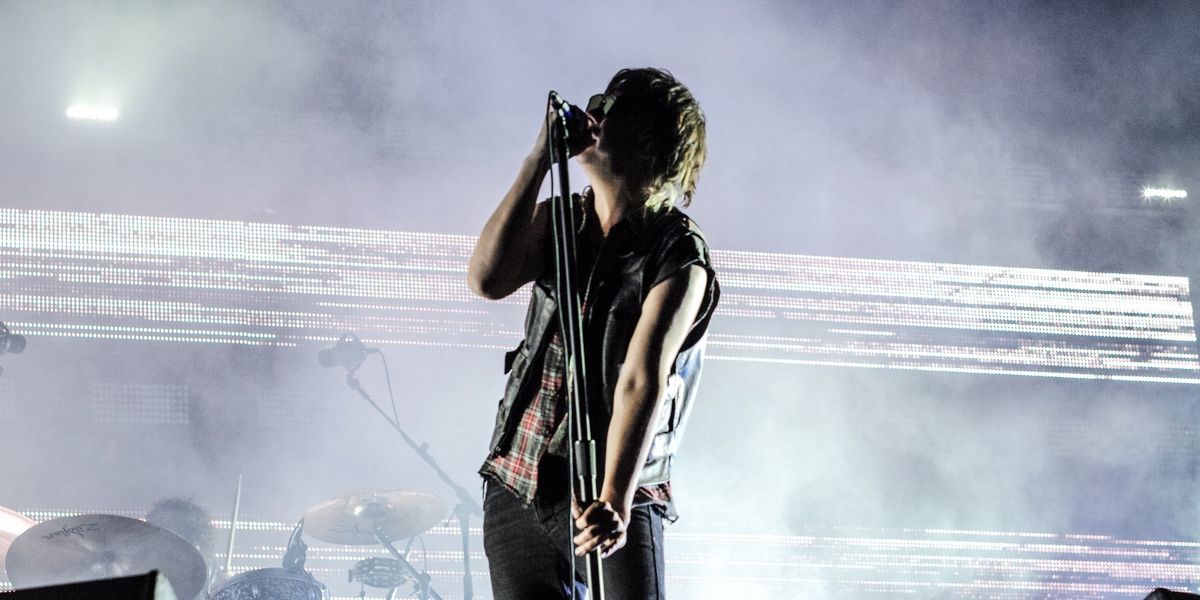 Why Do New Yorkers Get So Much Joy from the Strokes?

Each festival has its "thing": Flower crowns, cultural appropriation, massive amounts of weed smoke. But at Governors Ball this year, a different kind of trend was brewing.

Within the crowds of selfie-taking teens and couples rolling around in the grass were swarms of festival attendees proudly donning Strokes merch. It's a bit of a faux pas to wear an band's t-shirt to their own show, but the volume of Strokes fans who had decked themselves out was hard to ignore. Instead of seeming like a lack of sartorial imagination, it felt like a genuine tribute to the band--and a reflection of the city that made them.

The Strokes, after all, grew out of the Lower East Side in New York City in the early aughts--an era that flooded the city with dance rock, and a return to a grittier guitars, tight pants, and electric sex. Most bands from this era burned bright but have since gone on long hiatuses as members focus on their individual projects (The Strokes included--see Julian Casablancas' and Albert Hammond Jr.'s multiple solo endeavors). And like their peers, their occasional bursts of productivity creates a resurgence of fan interest. Even as their music changes, it still has the ability to transport listeners back to those early days.

At Governors Ball on Friday, the band shared a set time with electropop icon Robyn, which in retrospect was probably not wise planning on the part of concert organizers.The two acts battled for audience attention -- but Robyn's set was marred by technical difficulties and bad sound. By the time The Strokes were supposed to play, the majority of the Governors Ball crowd had already flocked to the GovBallNYC Stage to wait for them.

Sure some of this is just the pull of nostalgia for, as SPIN puts it aptly, the "classic rock" of the aughts. but the Strokes are also a band that sound live exactly like their records. (To extend that classic rock analogy, this ability makes them prime contenders for throwback reunions down the road). Besides instantly keying into the lo-fi crispness that made their sound so specific to downtown, it's also a reminder that playing shitty clubs in the Lower East Side still comes with the promise of success. Your band could be playing to no one in a shitty Bushwick basement one moment, and headlining hometown festivals almost twenty years later. After a few drinks (or maybe something else) in the sun, the narrative of the Strokes can evoke that hoary truism "if you can make it here, you'll make it anywhere" that every New Yorker, no matter how jaded, still holds to somehow.

And in that sense, wearing a Strokes t-shirt to their own show holds a certain kind of power. You're proud to see a band like that make it and sustain a career in a musical landscape that's constantly changing.

You're proud to be a part of the city that groomed them.