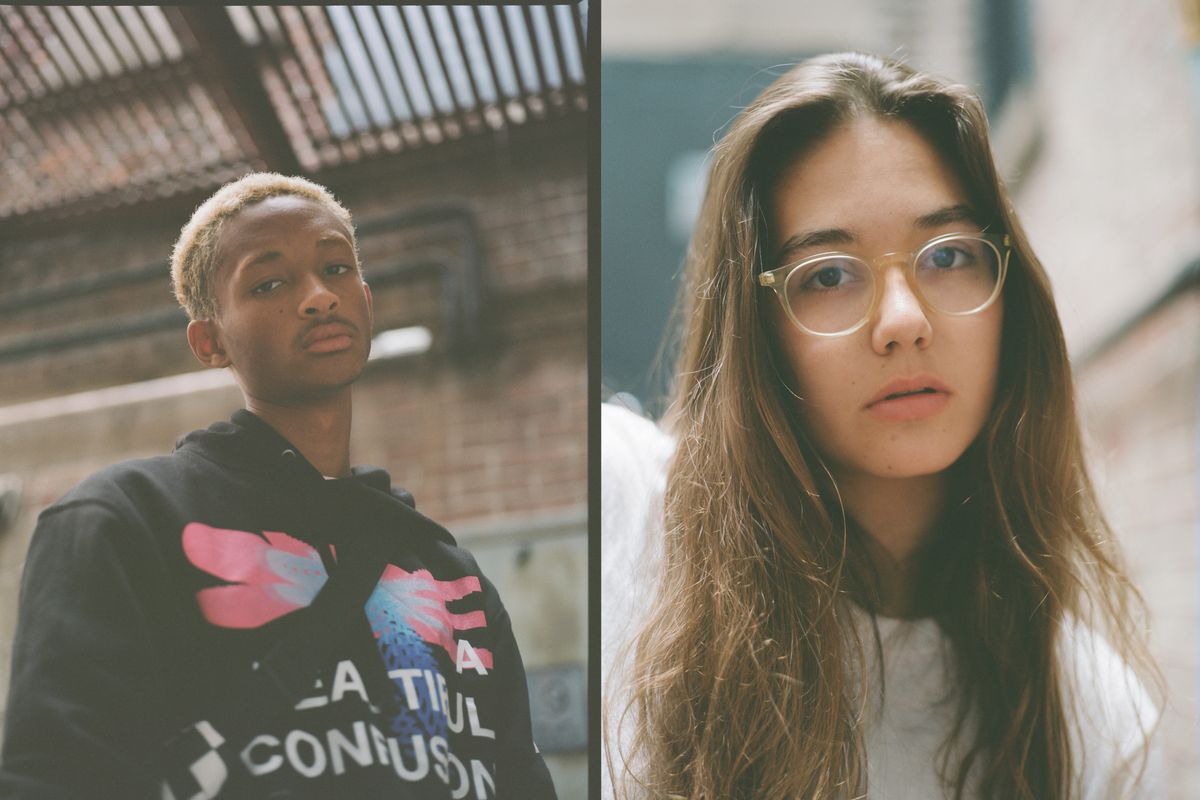 At one point in The Wolfpack director Crystal Moselle's new film, Skate Kitchen, a douchebag on Orchard Street asks protagonist Camille (Rachelle Vinberg) if she can do an ollie. Her friends shout at him. Of course she can do an ollie. Not only can Camille ollie, but in a later scene with love interest Devon (Jaden Smith), she does the trick on top of a New York City high-rise, defying splattery death.

Skate Kitchen, the movie, was directly inspired by the Skate Kitchen, a real life female-skewing skate collective co-founded by Vinberg (if you're in NYC, keep your eyes out for their logo, a sketch of a banana). It's a narrative film but stars real members of the group, and the dialogue—about everything from tampons to rough parental relationships to sexism to getting "credit carded," aka a skateboard slicing up one's vagina—is so natural that it feels cut from a documentary. The film, now famously, opens with a credit carding scene. In real life, it has happened to Vinberg twice.

Moselle first met Vinberg and her cohorts on the G train, and instantly knew that she wanted to create a project around them (her first effort involving the girls became a short film for Miu Miu). The resulting movie has been deservedly praised for its subtle storytelling and grounding in a specific, alluring subculture, and for its focus on female skaters as opposed to the archetypal Palace-clad boy. And Skate Kitchen is gorgeous—work from cinematographer Shabier Kirchner shows New York as a jungle gym for skateboarders, the camera following closely as they wind around the city like spaghetti on a fork.

"I just wanted to show that girls can do things that they think they can't do," said Moselle. "Or anybody can, any gender or person. Anything's possible."

Vinberg, Smith, and Moselle spoke to PAPER about skate culture, stitches, and whether or not it's really possible to smoke weed out of a banana.

Jaden, what was it like coming into this world?

Jaden Smith: Honestly, I enjoyed it so much. It was just like an enlightening experience, super eye-opening. Honestly, it changed my life, and it showed me a type of freedom. Kind of the type of freedom of just like you can do whatever you wanted to, even if that's skating through the streets. No one can really tell you that you can't. You know what I'm saying? When you're in the middle of like an intersection with a bunch of cars, you're just going to be gone. No one can stop you.

And so, it really inspired me for so many different parts in my life. Like, oh, I'm going to release an album because no one can tell me I can't. It's so enlightening, and I just hope so many other people around the world get to experience that same thing.

Obviously, you're a famous person, and if you just walk down the street people will come up to you. Did being with the skaters allow you to be yourself a bit more?

JS: Honestly, I did feel like I just got to be just in a scenario with people and it was really fun. I was just like I'm just a human. I'm just a guy.

Crystal, your work tends to focus on NYC subcultures. Do you ever think about the implications of showing those to a wider audience?

CM: It's not something I think about. I just do my thing.

They [the skaters] basically, like see the streets of New York as this playground. Just like the way that the buildings are shaped, and the ledges—how they can interact with the city is very beautiful to me, and sometimes I almost feel like it's a dance film. Like it just has these moments of beauty and grace, and I am inspired by that. As far as like bringing it to a wide audience, yeah. Let's show people these girls and their world.

I love the way it's shot. It feels like you're on a skateboard. Can you tell me a little bit about the cinematography?

CM: A lot of the cinematography, the skateboarding stuff, is on a skateboard. We're inspired by skateboarding films. We wanted to create kind of a different dynamic and use lenses that weren't as wide and that we kind of bounced between both of them.

I think I shoot a lot like a documentary, where I really gather stuff and I find things in the moment. There is a scene in a script that we're going from, but then, we expand from that and we discover things along the way, and I'm super open to collaboration and working with my subjects and the actors, so that they can bring something to the table that also feels very authentic.

The dialogue is really natural. As actors, did you feel free to improvise? Did you change scenes at all from the script when you were filming?

Rachelle Vinberg: We would work through the script before we started, and if we thought something was weird, we would tell her. Basically, we had beats we had to hit, so it was scripted, but then, the way in which we got to the beats, we could kind of have some freedom.

JS: I felt like Crystal gave us the options as a filmmaker to definitely experiment with improvisation, and that was really awesome, and that's just another thing about the film that really makes it really unique and organic, I feel, because of the people or there was a lot of people that didn't play like very main characters, but they were seriously a vital part of the film, and a lot of their improvisations are some very key moments in the film, I would say, and I feel like that kind of gives it the rawness.

CM: A lot of the boy scenes were [improvised]. When Kai [a skater] started rapping, that totally just happened.

We did a few days where we just kind of went out with everybody and cruised around with the boys. I didn't get to rehearse with the boys as much, and so, it was really just about finding little moments. And maybe I'd feed stuff to them. I'd be like, "Hey, Juan! Talk about girls that you like or something," and he'd start telling me stories. Everybody would roll their eyes, and it would become a little scene.

I love the dialogue between the women—the scenes where they talk about tampons, about terrible boys. It was so natural, and tackled feminist themes without being cheesy or obvious.

CM: Those were definitely themes that were important to me. I mean we shot this before the whole #MeToo movement. There's like a lot of things that just naturally came in and it's in the zeitgeist. It's what we're all talking about, and I just want [the movie] to feel very real and like just the world which I have been witnessing for the last years. I just would just write down stuff that the girls would talk about, what they were doing, or what's important to them, and just making sure that it was authentic to them.

Rachelle, what have your experiences been like with male skaters? There's a lot of sexism in the film.

RV: I don't want people to think that male skaters—all male skaters are just mean, negative, look at you. It's not what happens, but I think it's kind of like something that emphasizes the attention girls get. You know girls—like no matter what, you're going to get attention for being in the park, and sometimes, it can be negative and sometimes it can be positive, but it's attention. And if I'm skating in the street, every day someone will be like, "Oh, do a kick flip. Can you actually skate? Can you do this?" I think it happens more to girls than it does to guys because it never happens to me when I'm with boys, but it always happens to me when I'm alone.

The hardest part, honestly, can be the people who don't skate, people who aren't in that world looking at you as a girl in that world, so I still get intimidated every single day, too. It's just my personality, too. You know a lot of—Camille's like a personality type, also, because some girls don't give a fuck, and then, some girls are quieter like Camille.

The Skate Kitchen tends to get classified as fashion's favorite skate crew. What do you think of that designation?

RV: Honestly, a lot of the girls in Skate Kitchen, they're into modeling. Fashion is definitely a big part, so I think it's cool. I think it's nice that we're not getting recognized just for skating because that's not what we just are. You know we do other things. A lot of us are artists, but I do think—a lot of people do say, "Oh, I like the way you guys dress." As for me, I dress in what's comfortable, but I think it's cool.

I think it's also cool that a lot of people don't like how fashion is taking stuff from skaters, but I think that's a selfish thing way to think. Skating's for everyone. [Ed note: think this is a good pull quote]

What would you tell someone who's never gotten on a skateboard before?

RV: I'd say just go out and just do it and just like kind of go to a park and say hi to someone. They might end up being your friend.

Vagina stitches be damned. You're brave.

RV: I guess, in total, I've had like 20 stitches from both credit cards.

JS: I am so sorry Rachelle.

The Skate Kitchen uses a banana motif, and in the movie you smoke weed out of a banana. Can you actually do that? Make a banana pipe? It's not too mushy?