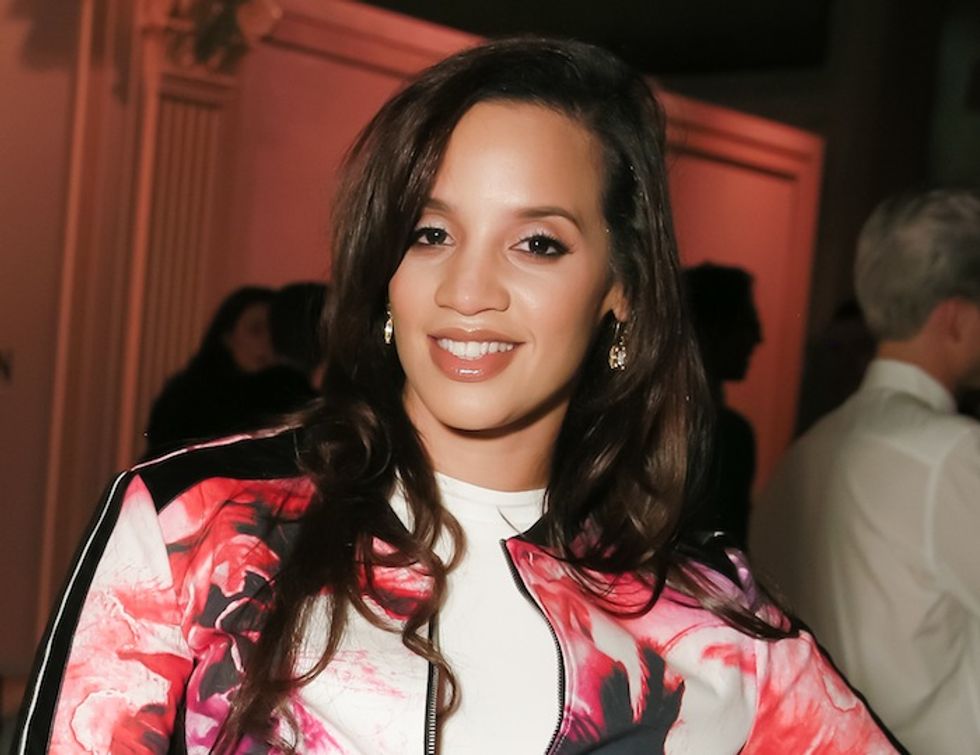 "The Show Will Be a Part of History:" Dascha Polanco On OITNB's Third Season

by Tai Gooden
PAPERMAG
Get ready to not leave your apartment this entire weekend because Orange Is The New Black is baaack. On a show that's made its name by casting a diverse group of actresses and giving them thoughtful, complex and well-written storylines, one of the series' biggest rising stars is Dascha Polanco. The Bronx/Miami-bred actress has quickly risen to fame for her portrayal of pregnant Latina inmate Dayanara "Daya" Diaz, a character that was initially positioned to only be reccurring, but became promoted to full-time after the positive response to her sweet romance with sentimental prison guard John Bennett (played by actor Matt McGorry). To celebrate a third season of more Daya, Crazy Eyes, Piper, and the rest of the crew, we caught up with Dascha to chat about everything from the pressures of fame to the meanings behind some of her more, uh, interesting Instagram hashtags (#phuckelectrons, anyone?).

OITNB has already been renewed for a fourth season. When you joined the cast, did you think that the show would resonate with viewers in such a major way?

No, I was pretty much worried about keeping my job and enjoying every experience because it was my first big thing. I was learning about the components of the show. I also wondered what audience was going to watch it. I think we were always focused on who would really watch it and enjoy the program. The popularity was so unexpected. I think this show is amazing, outstanding, and will be a part of history.

Daya's character has become a fan favorite. Why do you think her character is so endearing?

I think we all have hope, romance, and love...all of us can connect via those emotions. We also realize that Daya is a victim of circumstance like many of the other girls [on the show] but she has this sweet side of her. She takes responsibility for what her life is: she's in jail, yes, but she's still a very calm and cool woman. She's also caught up in a fairy-tale kind of love situation with Bennett and we get it because we all have a little fairy tale in us.

How do you prepare for some of those emotionally-charged or more difficult scenes? Do you pull from your own experiences?

I do pull from my own experiences for those scenes and it can be a bit emotionally draining. I have also developed journals. For Daya's character I have a journal that I keep near me and I write things down that will help me connect with her, even when they aren't my own experiences. I can relate to her having younger siblings but I was not in a home with drugs or a mom with a crazy boyfriend so I look at those differences and draw from them. I look at other people around me who have experienced similar things to Daya. Music is also a big factor in my preparation. It helps me prepare mentally. If it's a love scene, I'm all '90s R&B. If I'm doing an intense fighting scene I might listen to someone like Tupac.

Since OITNB premiered, how have you adjusted to suddenly being a celebrity in the spotlight?

It's new and I'm growing with the experience. It's scary and at times I question my own self like "Is this what I want...people knowing everything about me?" Social media is accessible to everyone and people feel like being a destructive critic is productive when its counter-productive and just a form of bullying. Our society likes to focus on all the negative things. But, you know, I feel uncomfortable calling myself a celebrity. People call me that but I just say "I'm Dascha." It is what it is and it's a part of my life now. But, I'm ready for this process. I never get annoyed when people ask me for a picture or they approach me. I'm always ready to embrace it because this is just the beginning and if I can't handle it now, then imagine what I would be like later!

Earlier this year, you faced controversy from an unsubstantiated rumor about you abandoning cats but you handled the dust-up with grace. Where'd you get such a tough backbone?

You know what? One of my major blows in my life was losing my mother and I feel like no one can hurt me more than what I felt when she died. I came to this country with my parents as an immigrant and I've worked my behind off. Nobody can take my hard work nor my education. I wasn't given anything in this world, I had to work for it. So with the controversy and people's opinions about what and who I am, they don't know the facts and they don't know me. My issue is not with people talking, but that I can't respond to them. I was taught that you defend yourself. But, being in this position [as an actress], I am learning that it's not necessary to respond. You can't break me any further than I have already been broken.

People on social media tend to project their personal hang-ups and negative outlook on others.

Yeah, I would do the same thing too if I had no life, my house was dirty, and I needed to wash my behind! I'm too busy keeping my house in check, teaching my kids, involved in my culture, and working to be worried about people who have nothing better to do. I have no reason to be on social media and be negative. You have to excuse people like that and realize that not everyone is able to get out of negative situations and mindsets. Cowards hide behind computer screens and find a way to personalize everything and spin things around because they are not listening and don't take time to read. They waste too much time on everyone else's details and not their own 5 senses. People don't like it when you are blessed to do what you love.

Recently you opened up about your past struggle with depression. What motivated you to speak openly about your experience and how did it feel to share your story?

One of my degrees is in Psychology and I felt that in the Latin community, predominately with women, depression and emotional suffering are not taken seriously. It's seen as an excuse or a sign of weakness so we tend to not speak about it. I didn't even realize I was going through [depression] until I went and spoke to someone who helped me realize it was depression. I needed help. It can be a lonely world...it's lonely because we don't communicate and we don't speak out. We could connect to each other in so many different ways but we choose to worry about what someone else is thinking. It's okay to show emotion. I remember how it took so much out of me to go and ask for help because I had no one to take care of my daughter and I wanted to stay in school. I literally broke down in front of the principal at her daycare because they didn't have space for her to go so I could get help. I told her I felt helpless. I cried and let it out and it felt so good.

What is happiness to you?

Your social media presence is entertaining, especially on Instagram. How did you come up with your hashtags #hairflipbye, #phuckelectrons, and #ismellgood?

[Laughs] OMG I haven't used #phuckelectrons in a long time! I have to use that one when people start talking shit. One of my favorite subjects was organic chemistry...science is a big part of my life and atoms are fascinating. I think haters are so negative, like electrons. They are also so one-dimensional that they wouldn't even get the connection. But, even though they are electrons and negative, it doesn't make them weak. The energy is so strong if you allow it to bond with other atoms it can grow and be so forceful. So, I always say "phuck an electron," you know? As long as my core stays positive, then all the shit repels. If you split an atom and hit that core, its an atomic bomb. You explode. So if you allow people to let you get to that point, then you will explode. So stay within your core. With #hairflipbye, I love the whole concept of hair, I love ponytails and hair flip. "Fuck a bye Felicia, hairflip bye bitch!"

One of your Instagram fans drew a picture of you as "She-Hulk" and you said you would love to play a superhero. Is there an existing hero you want to play or would you want a role created for you?

I want a new role created for me. I would love the Hulk role as a She Hulk. I do want to do something that no one has done before. I want a curvaceous superhero, like a real live one. Slim girls have their spotlight all the time. Let the curvy heroes have the spotlight!

Joy! It's a movie directed by David O. Russell with Jennifer Lawrence, Robert DeNiro, and Bradley Cooper in the cast. It's a great list of actors and I'm really excited about it. It's a major movie and it was a great experience to work with them.